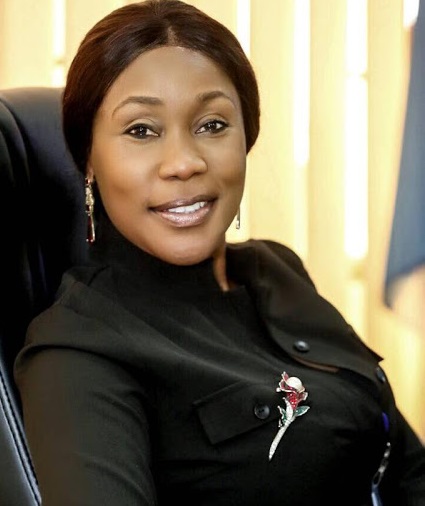 Dame Julie Okah-Donli is a highly motivated and result oriented management and legal expert with over 25 years of invaluable experience with top-notched managerial and leadership skills, and excellent analytical and communication skills.

Born on December 30, 1966; an indigene of  Bayelsa State, Julie Okah-Donli  has a Degree in Law from the Ahmadu Bello University, Zaria  and was called to the Bar in 1992. In 1990 while at ABU Zaria, she won the Dean of the Faculty of Law Award as the winner of the Moot Court competition.

She has held many positions in government and in the private sector. Those positions include:

Executive Assistant to the GovernorofBayelsa State: 2007-2012

Before her present appointment, she was the Principal Partner: Julie Okah & Co (Legal Practitioners)

She is also a philanthropist and engaged in a number of charity work. She is the Founder:Julie Donli Kidney Foundation.

Appointed to serve as a Member of the Project Advisory Committee on “Empowering Young People in Africa Through Media and Communication”, a flagship project of UNESCO.

She is the Author of the books:

·        Murky waters: The Stories of Nigerian Girls WhoSuffered Various Forms of Exploitation in the Hands of Human Traffickers.

A woman of many parts, she is:

She is also a member of the following bodies:

§  Institute of Chartered Secretaries and Administrators of Nigeria

§  Institute of Chartered Arbitrators of Nigeria

§  The Certified Institute of Auctioneers Nigeria

She is a mother of 2 well-adjusted Adults.

She is a Knight of the Blessed Virgin Mary, an honour from the Anglican Church of Nigeria.

Under her tenure as the Director General of NAPTIP, Dame Julie Okah-Donli has successfully championed the upgrade of Nigeria to Tier 2 of the Trafficking in Persons Report. She is able and determined to ensuring a Human Trafficking free Nigeria.

CONTRIBUTION TO THE DEVELOPMENT OF THE SOCIETY: Her contributions to national development have been enormous in the course of her tour of duty both in government and in her private capacity. In her private capacity, she has used her foundation, Julie Donli Foundation to touch the lives of many.

Since assumption of office as NAPTIP Director-General in April 18 2017, she has achieved the following:

·        Restructuring and re-organization of the Agency to properly position it to perform its statutory duties and the handover of these duties to core NAPTIP personnel; (Before she came, personnel of other Agencies who were seconded to NAPTIP were placed at strategic positions even when they were lower in rank than the permanent staff of the Agency. This led to a lot of impunity. Her coming has therefore, brought sanity and discipline to the Agency, as everyone is now held accountable for his /her actions and inactions based on the service rules and regulations.

·        Getting the Government of Nigeria to extend the Whistle blowing Policy to human trafficking issues; (This policy makes it easier for cases of human trafficking to be reported to NAPTIP by informants without fear of their identities being revealed and with some motivation);

·        Establishment of a NAPTIP Rapid Response Squad (NAPTIP-RRS) under the Director-General’s office for prompt operations. Through this Squad a number of criminal activities have been busted;

·        Piloted a Joint operation between the personnel of NAPTIP and the United Kingdom Border Force at the Heathrow and Gatwick Airports in London; (The essence was for the NAPTIP officials to help the UK Border force in identification and profiling of victims and suspects of human trafficking on arrival to London;

·        She has also piloted another joint operation between the Agency’s operatives and their Spanish partners in Spain;

·        Massive awareness creation across the country on human trafficking.

·        Setting up a Committee to establish a Regional Academy on Trafficking in Persons in Nigeria and to establish skills acquisition centres.

·        Galvanising the private sector and individuals to join the fight against human trafficking instead of leaving it to the Federal Government alone.

·        Since she came on board, new partners are being attracted to the Agency with many of them seeking areas of assisting the Agency accomplish its tasks.

·        Strengthening collaborations with relevant Law Enforcement Agencies in order to shore up arrests and cases referred to the Agency;

·        Continuous training of Prosecutors of the Agency to equip them with requisite and up-to-date prosecutorial skills;

·        Proper counselling of victims to prepare them for their expected roles as witnesses in Courts;

·        Conduct of more robust and intelligence based investigations to unravel Trafficking in Persons crimes;

·        Getting Voodoo Priests arrested and to renounce oaths administered on victims and free them from the oaths; ( Many of the Priest especially in Benin City have also resigned from administering oaths for human trafficking and now helping NAPTIP to deal with such issues)

·        Formation of State Task Forces against Human Trafficking to ensure the involvement of State Governments in counter-trafficking activities, including making budgetary provisions

·        Production of the first Nigeria Country Report on Human Trafficking

·        Conducting a fact-finding mission to Mali to draw global attention to the large-scale trafficking of Nigerian girls to Mali for sexual exploitation, and to engender a positive National Response

·        Financial Investigations: This involves tracing financial assets of any suspect within any known financial institutions, confiscation, and forfeiture of such criminally acquired assets through the Courts and remitting the proceeds into the Victims of Human Trafficking Trust Fund.

·        Strengthen existing partnership based on signed MOUs, Mutual Legal Assistance (MLA), Extradition Treaty and seizure and confiscation of assets of traffickers here through judicial processes as well as their forfeiture to the victims of trafficking trust fund;

·        Investigation and prosecution of human trafficking suspects who are nationals of the destination countries instead of prosecuting on Nigerians;

·        Wants the destination countries to make and enforce laws to curb demand for illicit sex;

·        They should also take steps to curb the use of victims as mere property and criminalise such activities;

·        Reinforcement of the bilateral cooperation between Nigeria and the destination countries of Europe in areas of identification, protection and assistance to victims, as well as the prosecution of traffickers;

·        Called for the establishment of frameworks for safe and humane return of victims of human trafficking who volunteer to return ;

·        Repatriate suspected traffickers of Nigerian origin with full information to us to prosecute and help us trace their assets for forfeiture;

Hard work, trust in God and the belief that there is no task that is too difficult to carry out.

ASPIRATIONS FOR THE FUTURE

To see NAPTIP take its proper place among respected law enforcement agencies in Nigeria and internationally. To contribute in taking Nigeria to high levels in all aspects of development.

MEET DAME JULIE OKAH-DONLI, THE WOMAN BEHIND THE SUCCESS OF NAPTIP was last modified: December 24th, 2019 by Bunmi Durojaiye