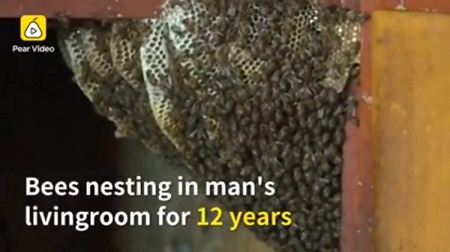 The sight of a single bee buzzing around is enough to drive some people into a frenzy, but one family in China has somehow been living with an entire beehive in their living room for 12 years.
According to Oddity Central, they even collect the honey from it and sell it for a small profit.
A Pear video that recently went viral in China shows a home in Gunagnan, China, where bees have been living inside the wooden furniture for 12 years.
Owner Yongfu Li says that they simply came in one day and started building their hive. There was a wedding in the family that day, and he viewed the arrival of the bees as a good omen, so instead of driving them away, the man just allowed them to build a home inside his living room.
“The day these bees came was a great day (the wedding), I think they knew it was a great day,” Li said. “Fengshui masters said they came to work for me.”
Taking the Fengshui interpretation to heart, Yongfu Li let the bees build their hive and started collecting the honey they produced, three times a year.
He ends up with about 5 kg of honey every time, which he then sells for around 100 RMB ($15) a pound, raking in a total of $450 a year. Not a bad deal, if you exclude having to share your house with hundreds of bees.
Li has now been sharing his house with a free colony of bees for 12 years – or so he claims – and even though the video doesn’t mention any bee stings, I think it’s fair to assume that the man and his family have been stung a few times during that time.
Watch a video of the house below:
Meet the Family Which Has Been Living with a Beehive Right Inside Their Living Room for 12 Years was last modified: July 20th, 2017 by Arinze Ago