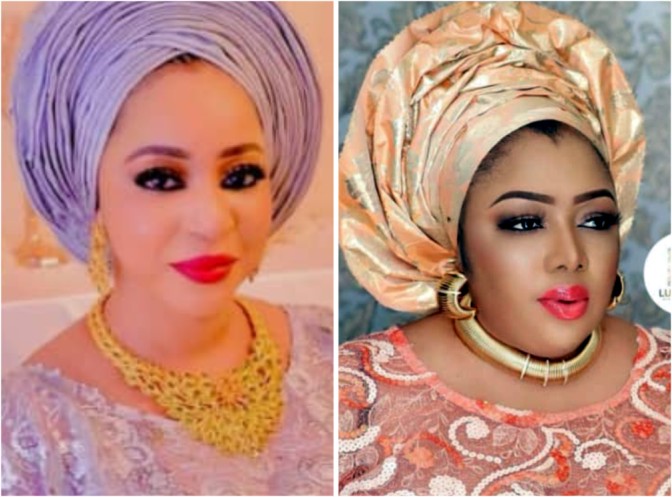 The recent rise in the exchange rate of naira to the dollar has made the price of Luxury HOH Lace, which is the favourite of stylish Nigerian celebrity women, to go up.

HOH may not be the most expensive Lace rocked by the Nigerian rich and mighty female celebrities, but there is no doubt that HOH remains a trendy.

Why is the crave for HOH so high when it is a lace dated over 40 years ago? It is because the grandmothers of the Nigerian Social Space and respected rich celebrities like Sisi Abah Folawiyo, Senator Florence

Ask some of them, you will be told that the HOH they bought over 30 years ago is still in their wardrobe and it is still as new whenever they rock it.

Perhaps you don’t know that Luxury and Class are the best ways to describe “HOH”. This fabric is not new on Nigeria fashion radar but the rate at which even the young and rich celebrities crave for this body-friendly fabric will make you want to have collections of HOH in your wardrobe.

While many love the regular HOH whose 2020 edition is sold for over over 900k there is a massive embrace for either Velvet or Chattily Lace.

Even when the COVID19 pandemic was on, those who aren’t going for parties were wearing HOH Lace for Birthday Shoots or Zoom Parties. The rich Celebrity Bride wear HOH to set themselves apart from the rest of the bride. Not all brides can afford HOH as engangement outfit.

But irrespective of how much HOH Lace is sold, there is no doubt that this Lace is the most sought after Expensive Lace rocked by many Rich Nigerian Celebrity women.

The Questions many can’t stop asking is do all fabric Merchants sell HOH Lace? Why has HOH not gone out of fashion, if it is a Lace dated over 40 years? What stands HOH apart from other Laces?

City People gathered that not all fabric merchants sell HOH. Even some HOH Merchants are not on Instagram, despite the perceived large market on Instagram. Yet they are the choice of the all rich celebrities.

One of those who fall in this category sells for the likes of Dangotes children, Dr. Shade Okoya, Otunba Folashade Senator Florence Ita-Giwa and others. She is Mrs. Dupe Saego. She has franchise of some HOH designs and you may not likely get her designs from any store. Funny as it may sound, she sells from home, but her Apapa residence is always a beehive of activities as many Governors wives, Senators wives come from 36 states to buy from her. She has been selling HOH for over 40 years. When Dangotes daughter got married a few years ago, she bought from her. That was when the Multicoloured HOH design was strictly made for Fatima Dangote when she married former IG, Abubakar’s son

Another big fabric merchant who sells HOH lace but not on Ig is Alhaja Mosun Masha. She is the brain behind a popular fabric brand on Lagos Island. She is known to sell high-end Swiss Lace. She is the brain behind MM fabrics. She has been selling HOH for over 30 years. The likes of Mrs. Sara, Mrs. Fatima Adegunwa and many other celebrity women buy from her.

Another ‘A’-list celebrity woman who is in her 60s and doesn’t do Instagram, but she’s number one seller of HOH is Mrs. Usman. She is the brain behind, Oyeog Fabrics. She has been selling HOH for over 30 years. You can’t take it from her. She is a leader when it comes to selling HOH lace.

Alhaja Kuburat Sokunbi is very popular with her brand Kubis Fabrics, but ask for a fabric merchant who is very popular for selling HOH lace, you will be told Kubis is a leading brand. You won’t see HOH on their page but visit their Balogun store, they have a big Store where they sell only HOH. She has been selling HOH for over 20 years and still counting.

What about SAS Fabrics? We are not just talking about Toyin and her sister. Their late mum was a foremost HOH lace merchant before she died and she passed it on to her 2 daughters. They have 3 big branches of SAS at strategic locations in Lagos. They are top HOH merchants. The likes of former Governors Ambodes wife, Mrs. Bolanle, Mrs. Sherifat Aregbesola and many others buy from the SAS Sisters.

In fact, it took many HOH sellers many years before posting their HOH lace on Instagram but Mrs. Titilayo Marshal, the wife of K1 took the bull by the horn. She has been selling HOH away from Instagram for over 15 years but her page parades many celebrities. Her Instagram page always has many HOH in varieties of colours.

What about Mrs Jumoke Animashaun, the brain behind Elsies Fabrics? She stocks the best of HOH laces. Since she joined the fabric business, 10 years ago, she has made a huge impact. Many celebrity babes of style patronise her. Lagos stylish Queen, Olori Aramide Elegushi, Olori Maria Oniru, Alhaja Saidat Aralamo and others all buy from her.

Do you know that Mrs. Jumoke Oyeneyin, the brain behind “Jummy Exclusive Fabrics is one of the leading HOH Plug. Since she started her fabric line a year ago, she has made a huge difference in that sector. Her unique eyes for details has set her apart. Many love her fashion sense and she won’t wear another brand if not Jummhy Exclusive. Many celebrities abroad will not wear another brand other than Jummhy Exclusive.

Adusky stays in far away United States. This Mulato babe with good bodyshape won’t wear another brand other than Adusky. She has eyes for luxury pics in unique colour and they won’t wear any other brand but Adusky.

Do you know Nike Ajiwe of Fabric Rush sells unique HOH? This cool.and calm Lagos big babe clothes most celebrities of class. Visit her page and see the list of those who rock her brand.

Mrs Dupe Amusan has been selling fabrics for over 20years on the island but she has since moved to Lekki phase 1 where her daughter runs a premium Luxury HOH fabric brand called Dumas.“ She sells High end fabrics..

Mrs. Bolaji Tanwa, the brain behind Tanwa Fabrics in UK is popular on Lagos social scene. Though she has been selling fabrics in London for over 20 years but not many know she also sells HOH. But after shaking Lagos social scene with her mums remembrance in Ibadan by picking HOH and Gold as Aso-Ebi, she change the narative. Her shop is called Gbagi Tuntun in London.

There is no big Ibadan Fabric Merchant who want to wear HOH Luxury Lace and won’t think of Bola fabrics. It is owned by Hajia Bola Ologburo. She has been selling fabrics for over 25 years. She sells best HOH laces. The likes of Alhaja Taofikat Babayemi and many rich Ibadan socialites buy from her.

Hajia Laura Aduwo is one of the big HOH sellers who made big money. She has been selling fabrics for over 10 years. Many Lagos young celebrities buy from her.

Latitos and Drem Fabrics are also known to sell HOH Lace. Many Atlantic big babe won’t wear HOH if it is not from Drem Fabrics. It is run by Mrs. Ayobami. One reason why many love buying HOH from her despite selling in dollars is that she stocks the latest edition. Latitos Fabrics is one of the close friends of Mrs. Jokotade Adeusi and she sells HOH in the United Kingdom.