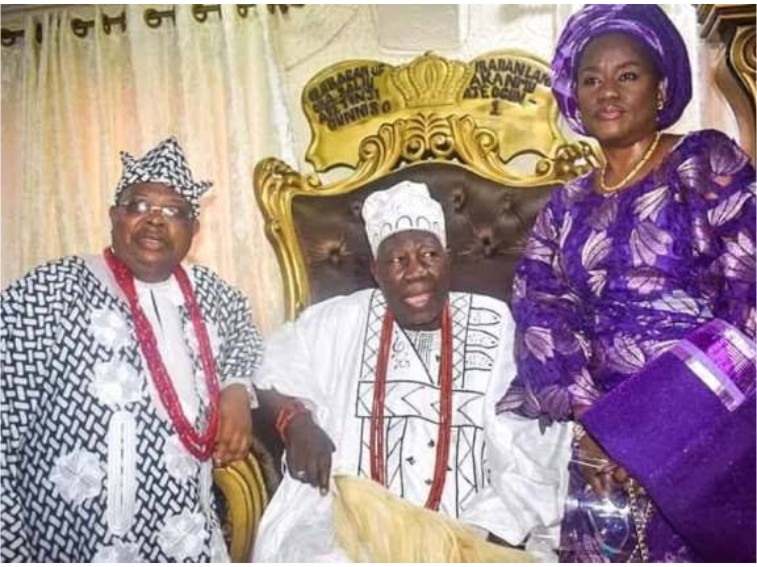 Last week Monday, the Popoyemoja palace of the Olubadan of Ibadanland, Oba Saliu Adetunji, bubbled with activities. A new set of Mogajis and Baales were installed amid pomp and pageantry by the highly respected monarch.

A governorship aspirant in Oyo State the platform of the All Progressives Congress (APC) Engr. Joseph Tegbe, and a veteran broadcaster, Kola Olootu, were among the newly installed Mogajis.

Tegbe was installed Mogaji of Oguntegbe Compound, Labo, while Olotu, on the other hand emerged the Mogaji of Adesun Compound of Oje.

Two others who were installed are Isiaka Odebode and Lukman Adeleke. They became Mogaji Ile Iwo, Esu Awele, Oja’ba and Odekunle compounds respectively.

The installation, no doubt, had elevated the status of the new chiefs as they emerged the heads and representatives of their respective families. Most especially for Tegbe, whose origin had been in doubt in some quarters for a long time. His emergence as Mogaji of his compound has put to rest the insinuation that he is not from Ibadan.

According to Tegbe shortly after the installation, while addressing newsmen at his Bodija residence, “We are just revalidating the obvious mischievous allegations that a man that has his origin in Ibadan is not from Ibadan but from Edo or Delta.

“This is just the beginning of greater things to come to my family and Ibadanland. My plan is to consult round to know what my people lack, which I’ve already been doing through my foundation by supporting Ibadan indigenes, widows and less privileged in the society.”

Tegbe also went further to reiterate his quest to serve Oyo State as his interest in governance has never diminished, saying that he is very keen to ensure that the people get good governance by through active participate.

Engr. Joseph Olasunkanmi Tegbe is a partner and Head of Technology Advisory Services Practice of KPMG Professional Services in Nigeria. He is also a fellow of the Institute of Chartered Accountants of Nigeria.

Interetingly, Tegbe and Kola Olootu seem to have some things in common, besides their Ibadan origin. Tegbe is a boardroom guru and notable politician, while Kola Olootu is an accomplished broadcaster. He is also the Ba Soro of Yorubaland.

For those who may not know what Mogaji means in Ibadan traditional chieftaincy system, Mogaji is the head and representative of an Ibadan family compound. It is also the preparatory stage to becoming Jagun, the first step in Olubadan line, which has 22 steps in Otun line and 23 steps in Balogun line.

A Mogaji doesn’t just emerge; whoever will be saddled with such responsibility must have earned the love and respect of his people. Apart from the fact that the person must be of quality character, he must have contributed immensely to the growth and development of his compound, his people and Ibadan land generally.