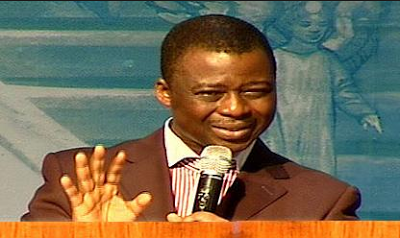 MFM Ministries is a full gospel ministry devoted to the Revival of Apostolic Signs, Holy Ghost fireworks and the unlimited demonstration of the power of God to deliver to the uttermost.

The do-it-yourself Gospel ministry where your hands are trained to wage war and your fingers to do battle is led by Dr DK Olukoya as its General Overseer who also owns MFM Prayer City where prayer goes on 24 hours a day, 7 days a week, non-stop.Apart from the general Overseers wife, Pastor Shade Olukoya who is in charge of all the women activities in the church who also provides solid leadership alongside her husband, there are 5 men who are very close to him and they are all his assistants in charge of different port folio in the church.

MFM also has a large number of senior pastors and ministers who cater for the spiritual needs of the ever growing church. Please click here to explore our Branch network worldwide. The GO, Daniel Kolawole Olukoya (DKO) was born in Akure, Ondo State, Nigeria to Mr. Olukoya, a Police officer and Mrs. Olukoya, a trader. While registered at St. John’s CAC Primary School, Akure, he was recognized as an exceptionally intelligent child coming tops throughout his stay at the school. Later when his family moved to Lagos, he was enrolled at St. Jude’s Primary school, Ebute metta from which he graduated with excellent results.

DKO then proceeded to Methodist Boys’ High School (MBHS), Broad Street, Lagos (established in 1878). Incidentally, this is where he became born again. It was also at MBHS that he encountered an Indian teacher who once said in class “Boys, if you want to escape poverty, READ YOUR BOOK!” DKO doggedly followed this advice, studying from 9pm to 3am daily. By the time DKO finished from MBHS, he was the best graduating student of his set.

In 1976, DKO was admitted into the University of Lagos (Unilag) to study Microbiology. He graduated from Unilag in 1980 with a first-class degree in Microbiology. He was the first person to have achieved a first-class in the course at the university and his G.P.A is still the highest recorded so far (as at February 2010) in that course.

Soon after graduation, DKO won a scholarship to study for a Doctor of Philosophy (PhD) degree in Molecular Genetics at the University of Reading, United Kingdom. Despite the natural difficulty of the programme, DKO earned his PhD in 3 years and returned to Nigeria.

Upon his return to Nigeria, DKO joined the Nigerian Institute of Medical Research (NIMR), Yaba, where his reputation as an exceptional Geneticist of African origin became established. DKO emerged as an authority in the study of genetics, publishing over 70 scientific papers in a short span (a remarkable feat by any standard). He also taught Genetics and was external examiner in a number of universities. Moreover, he has attended and presented papers at scientific conferences in almost all continents of the world. Even today, DKO continues to contribute to the field of genetics and biotechnology via the Daniel & Fola Biotechnology Foundation, a registered NGO established to empower Nigerian citizens with modern and contemporary laboratory skills in Molecular Biology and Biotechnology.

DKO’s father, apart from being a policeman, was also a pastor at the Christ Apostolic Church (CAC). Thus, he was raised in a Christian home with Christian beliefs. Throughout all his years in school, DKO was committed to the service of the Lord Jesus Christ. His passion for Jesus and his spiritual fire increased tremendously during his doctorate degree in the United Kingdom. DKO’s ministry is heavily influenced by the work of the late Apostle Joseph Ayodele Babalola, the founder of the CAC church. she provides solid leadership alongside her husband at the MFM Church. Pastor Kehinde Adegbolahan is the Assistant General Overseer in charge of mission and evangelism.A Pastor, Minister, Prophet and a Teacher of the Word is a versatile minister of the gospel to the glory of God. As a skillful and wise builder, He is remarkable with unique abilities to train other ministers of the gospel of our Lord Jesus Christ across different lines of ministerial responsibilities.He is highly blessed with great insight into the mysteries of God in issues relating to faith, deliverance and divine grace as evidenced in my teachings and ministrations marked with mighty manifestations and incredible testimonies. He is a foremost student of Dr. Daniel Kolawole Olukoya, the General Overseer.He has authored books, publications, white papers, prints, online and offline articles and writeups, including wide platform over the social media and internet in general.

Pastor Abiodun Ladejola is in charge of Research and training as  an Assistant General Overseer at the Mountain of Fire & Miracles Ministries World Headquarters.Before his present position, he was for several years, a Senior Regional Overseer at the Ministry based in Enugu State, Nigeria, where God used him to do Powerful and Miraculous works. Walking in line with the Anointing of Dr. D.K. Olukoya, the General Overseer of MFM, God is powerfully using Pastor Ladejola to deliver the good news of the Gospel and Salvation to people all around the world.

The 3 other pastors include Pastor Gbesan Adebambo who is the assistant general overseer, Administration. He sees to the administrative affairs of the church worldwide. Pastor Timothy Akano is in charge of MFM, Valencia Spain. He is also an Assistant General Overseer of special duties. Pastor Adedeji Adetayo is the Assistant General Overseer on Finance, He is also in charge of USA/Canada,  North America as a whole.