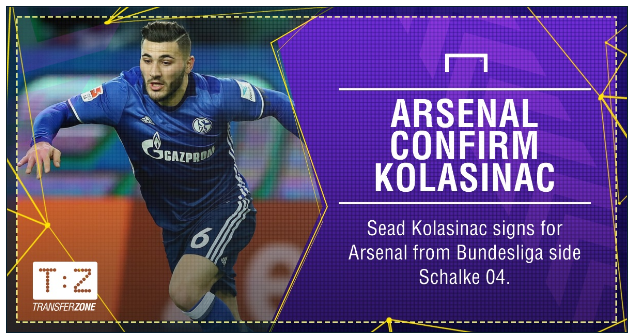 After so much pressure from the fans on Arsene Wenger to resign, the Arsenal manager has confirmed the signing of Sead Kolasinac, who will join the club on a free transfer from Schalke.
The north Londoners have won the race to sign the Bosnian defender, with Goal revealing back in April that they had beaten competition from the likes of Juventus and Chelsea for his signature.
In a statement released on Tuesday, the Gunners announced that the 23-year-old will join the club “on a long-term contract” and will link up for pre-season training in July “subject to the completion of all regulatory processes”.

SEE ALSO: ENGLISH TOP CLUBS FALL OUT OF 5 BEST TEAMS IN EUROPEAN RANKING – SEE DETAILS
Arsenal had been keeping tabs on Kolasinac since the start of the 2015-16 season. They stepped up their interest in the last year and, as reported by Goal, the left-back completed medical and agreed personal terms with the club at the end of April.
The Bosnia and Herzegovina international, who can play at left-back, centre-back and in midfield, emerged as a key player for Schalke in recent seasons, featuring for the club in the Champions League and Europa League.
He scored three goals in 25 Bundesliga appearances last term as Die Knappen finished a disappointing 10th in the table.
Born in Germany, Kolasinac played for the country of his birth at youth level before switching allegiance to Bosnia and Herzegovina in 2013.

Meet The New Player Arsenal Just Signed And How Much He Costs was last modified: June 6th, 2017 by Damilare Salami