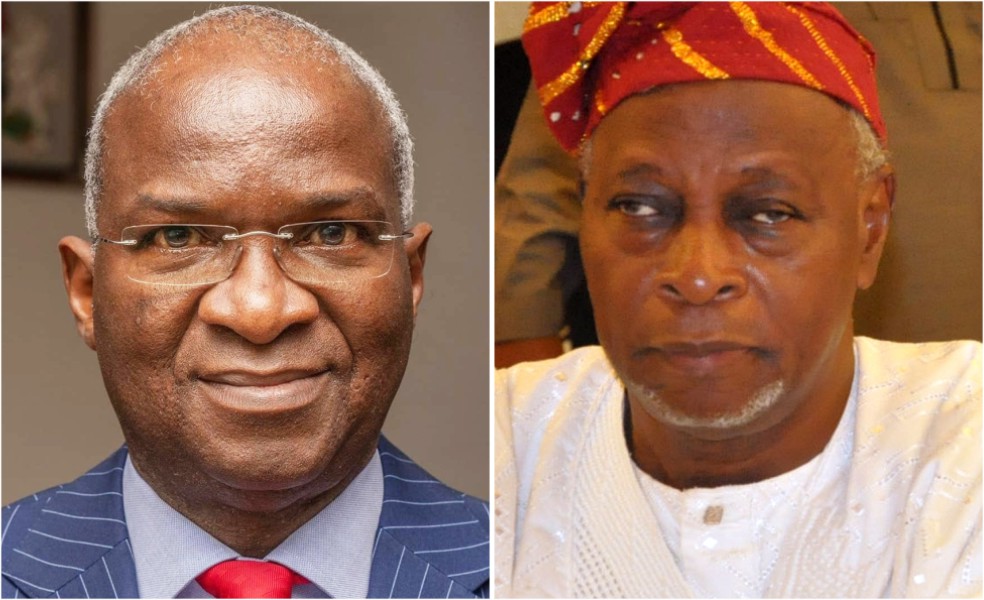 •How They Run NIGERIA Today

Popularly called Up IC, Igbobi College celebrated its 90th founders anniversary penultimate Saturday at the prestigious Eko Hotel and Suites Convention Centre, it was attended by the Vice President of Nigeria, Prof. Yemi Osinbajo and Speaker, House of Assembly, Hon. Hakeem Gbajabiamila who are both great Alumni of the school. The event was an epoch-making one where the school alumni were to raise a fund of 1billion to develop their alma mater.

Located in Yaba, Igbobi College is a college established by the Methodist and Anglican Churches in 1932, in the Yaba suburb of Lagos. It is still on its original site and most of the original buildings are intact. It is one of the oldest colleges in Nigeria and has been the alma mater of a number of well-known Nigerians. In 2001 the school was returned to its original owners by the Asiwaju Bola Tinubu led Lagos state government.

Since this school has been founded 90 years ago, with 150 brilliant students, prominent Nigerians have been produced by this great school.

This was one thing that the Vice President acknowledged when he was delivering his speech on the Anniversary night. He said ‘ Igbobi produced the brightest and best, we owe generations to come to that same opportunity. When the founders of Igbobi College all those many years ago, decided to fill a gap they saw in the education of boys, they not only created an environment that transformed the lives of the first 150 boys that walked into its Yaba campus in 1932, they triggered a legacy of excellence and integrity that has produced a retinue of young men who have gone on to set great examples in almost every sphere of human endeavour”.The notability of our alumni speaks for itself. In many ways, Igbobi College is a testament to what committed and visionary leadership can accomplish. When people come together to serve a purpose greater than themselves the results are far-reaching and long-lasting”.

These great minds formed an association called ICOBA, Igbobi College Old Boys’ Association (ICOBA) in 1936, just 4 years after founding the school. It is one of the earliest Old Boys Association amongst the “Heritage Schools in Nigeria.ICOBA is open to all those who attended Igbobi College as an enrolled student, and who have spent at least one academic year attending classes in the College.

The Igbobi College Old Boys’ Association (ICOBA) maintains and enhances a highly engaged, vibrant community of alumni worldwide. It helps connect alumni to each other and their Class Sets through a wealth of community activities and events around the world.

The Association, ICOBA creates an environment of support for their alma mater, Igbobi College, in particular the educational upliftment of the pupils and improvement of infrastructures at the College.

Who are those that are prominent old boys of this great school? On this list is the Vice President of Nigeria, Professor Yemi Osinbajo, Speaker House of Representative, Hon. Hakeem Gbajabiamila, the President of ICOBA, Mr Olumuyiwa Kinoshi, The chairman of ICOBA, Femi Olubanwo, Late Chief Ernest Shonekan, GCFR, the former interim President of Nigeria, he died a few weeks back and he was celebrated hugely by the Old Boys Association. The lawyer and statesman who served as the interim Head of State of Nigeria from 26 August 1993 to 17 November 1993 was titled Abese of Egbaland from 1981 (in addition to a variety of other chieftaincy titles). Oba Tejuosho’s first son, Olanrewaju Adeyemi Tejuoso is also a great alumnus of this school. He is a politician and was a senator from Ogun State at the 8th Assembly.

Dr Babatunde Fowler, a public officer, tax administrator and social reformer was the Executive Chairman of Lagos State Board of Internal Revenue and Chief Executive Officer of Lagos State Internal Revenue Service. He is the former Executive Chairman of the Federal Inland Revenue Service (FIRS). Chief Michael Olasubomi Balogun, the great banker and philanthropist who founded First City Merchant Bank, a company that later became the FCMB group. Chief Balogun was a long time member of the council of the Nigerian Stock Exchange.

Olufemi Hakeem Gbajabiamila, a lawyer and All Progressives Congress Leader, and Speaker of Nigeria’s 9th House of Representatives.

Felix Ovudoroye Ibru was an architect the first democratically elected Governor of Delta State and Senator for Delta Central Senatorial District. Until his death, he held the position of President General of the Urhobo Progressive Union (UPU). As a traditional chieftain of his homeland, Ibru bore the tribal honorific Olorogun and often used it as a pre-nominal style. This title is also borne by many of the members of his large family in the same way.

Prof, Taslim Olawale Elias was a jurist. He was Attorney-General and Chief Justice of Nigeria and a judge and President of the International Court of Justice. He was a scholar who modernised and extensively revised the laws of Nigeria. He served as Registrar of the United Nations International Residual Mechanism for Criminal Tribunals (IRMCT) until 30 June 2020. Bamidele Olatunbosun Sosimi known as Dele Sosimi is a Nigerian-British musician who is making great waves in Europe.

Pastor Paul Adeolu Adefarasin is also an alumnus of this school. He is a Christian Minister, Thought-Leader, Philanthropist, Author and Speaker. He is the Founder of The House On The Rock, a multiracial and multifaceted non-denominational Church with 77 parishes and fellowships across Africa and Europe. With more than 30 years of pastoral and visionary leadership experience, Paul is sought after to share his expertise across many sectors. For upwards of 20 years, he has hosted the programme ‘Something Is About To Happen’, which airs across Africa, Europe, and North America on terrestrial and satellite television.

Prof.Jacob Festus Adeniyi Ajayi, commonly known as J. F. Ade Ajayi, was a historian and a member of the Ibadan school, a group of scholars interested in introducing African perspectives to African history and focusing on the internal historical forces that shaped African lives

Chief Akintunde Aduwo is a retired Navy vice admiral who served as Chief of Naval Staff from 1980 to 1983 and as military governor of the Nigerian Western State from July 1975 to August 1975 during the military regime of General Murtala Muhammed. Later he became Chief of Naval Staff.

The honourable minister of works and housing, and ex-Governor of Lagos State, Babatunde Raji Fashola is also one of the great and proud alumni of Igbobi College. Famous engineer,, Foluso Phillips is also one of the prominent Old Boys of Igbobi college. What of the PTA Chairman, Victor Olatunji Teriba? He is also a successful academic.

Chief Samuel Oluyemisi Falae CFR (simply known as Olu Falae, is a banker, administrator and politician from Akure, Ondo State. He was secretary to the military government of Ibrahim Babangida from January 1986 to December 1990 and was briefly the Finance Minister in 1990. He ran for president in Nigeria’s Third and Fourth republics.

Michael Ibru was a  businessman from Agbara-Otor, Delta State. He was the head of the Ibru Organization, one of the largest conglomerates in Nigeria. As a traditional chieftain of his homeland, Ibru bore the tribal honorific Olorogun and often used it as a pre-nominal style. This title is also borne by many of the members of his large family in the same way.

Not forgetting the great super eagle goalkeeper, Joseph Dosu, he is a former football goalkeeper. Akinwande Bolaji Akinyemi is a professor of political science who was Nigeria External Affairs Minister from 1985 to late 1987. He is the chairman of the National Think Tank.

Segun Awolowo Jr. is the executive director of the Nigerian Export Promotion Council, a position he assumed since 2013. He is the grandson of former Nigerian nationalist, socialist and statesman, Chief Obafemi Awolowo. In July 2021, he was unanimously elected as the President of National Trade Promotion Organizations (TPOs) from ECOWAS.

Olufela Olufemi Anikulapo Kuti popularly known as Femi Kuti is a Nigerian musician born in London and raised in Lagos. He is the eldest son of Afrobeat pioneer Fela Kuti and a grandchild of a political campaigner, women’s rights activist and traditional aristocrat Funmilayo Ransome-Kuti.

Air Commodore Gbolahan Mudasiru was an Air Force officer who was appointed Governor of Lagos State, Nigeria, holding office between January 1984 and August 1986 during the military regimes of General Muhammadu Buhari and his successor General Ibrahim Babangida.

Abiodun Baruwa is a former professional footballer who also played as a goalkeeper.

Honourable Justice Joseph Adetunji Adefarasin was a lawyer and High Court judge. He was one of the foremost students of Igbobi College, Yaba, Lagos from 1932 to 1939 and studied law at the University of London from 1946 to 1949. Joseph Adefarasin was the Second Chief of Judge of Lagos from 1 November 1974 to 24 November 1985. Dr Sola Odemuyiwa is the Chairman of ICOBA Europe, there is also Femi Onabolu and Major general Dele Ologundudu also in Europe.

There was an election of new council members a few months back and this set of Igbobians are also prominent.

Why Many Teenagers Are Hooked On Blood Money Ritual