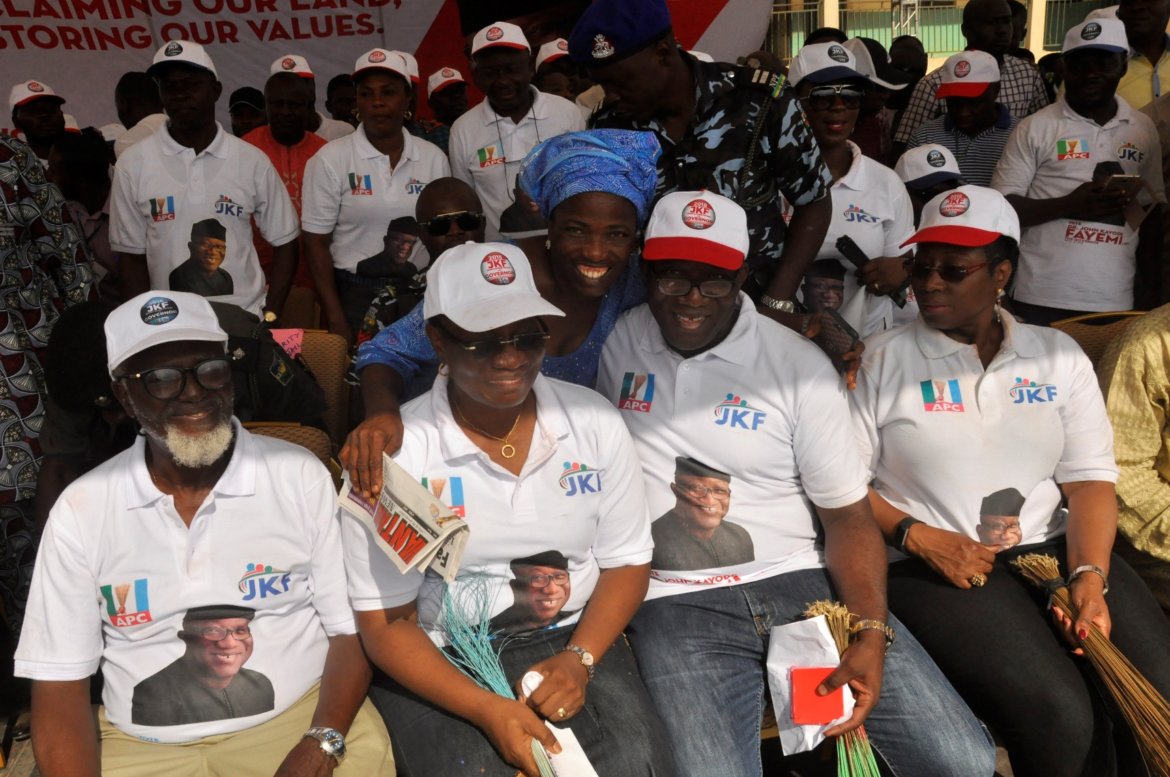 The race for who will succeed the Ekiti state governor, Dr Kayode Fayemi has begun and 16 political parties have shown interest. The Independent Electoral Commission, INEC has approved 16 candidates from 16 political parties. By June 2023, these people will go to the poll to decide who gets what after Governor Fayemi. Here is the list of all the gubernatorial candidates

Chief Reuben Famuyibo, is a chieftain of the ruling All Progressives Congress (APC) and 1993 Social Democratic Party’s (SDP’s) presidential aspirant. He is contesting under the Accord Party.

Famuyibo, who contested the Alliance of Democracy governorship primaries with former Governor Niyi Adebayo in 1999, said he has an implementable blueprint that will engender radical development in Ekiti in the areas of industrialisation, job creation, social security, free education and health care policies. He added that his team has begun aggressive mobilisation of the electorate to back his aspiration through a house-to-house consultation of party leaders to seek their blessings.

The African Action Congress Party (AAC) has elected Revd. Ajagunigbala Moses Olajide as the gubernatorial candidate of the party ahead of the Ekiti election The AAC believes that Rev Ajagunigbala will improve the health care facilities and redesign the transportation system of the state if elected as the governor of Ekiti State. The party describes Reverend Ajagunigbala Moses as a man of unblemished integrity with required capacity that can lead the state to the Promised Land. Rev. Moses Olajide Ajagunigbala is a man of God from the popular African Apostolic church and he’s based in Igede-Ekiti in Ekiti State.

Dr Oluwole Oluyede Is the African Democratic Party, ADC gubernatorial candidate. The party has declared that with his entrance into ADC, he is likely to clinch the ADC ticket during primaries and win the Governorship Election in Ekiti State. His supporters who constitute over 60% of APC members and many PDP leaders say that they are leaving their various parties because of the toxicity within the two parties caused by greed and leadership inertia. Dr Oluwole Oluyede is a top politician, a brilliant medical doctor with a specialization in emergency. He was one of the key members of the APC before he defected to the ADC.

The Erelu Atayese of Iyin Kingdom, Chief Engr. (Mrs.) Josephine Kemi Elebute-Halle is the gubernatorial candidate of the Action Democratic Party, ADC, she was one of the big shots from the People’s Democratic Party, PDP before the party reportedly became compromised due to internal politics and seclusion of some members. She is known for her assertive and fearless nature.

Benjamin Olufemi Obidoyin is the guber candidate from the All Progressive Grand Alliance. He is said to be poised to transform Ekiti State into a competitive economic destination for foreign investors.

Peter Adegbenro Fagbemi is the guber candidate from the Allied Peoples Movement (APM). APM was registered as a political party by the Independent National Electoral Commission in August 2018. The party endorsed President Muhammadu Buhari as its candidate in the 2015 Nigerian general elections.

Christiana Modupe Olatawura is from the Action Peoples Party (APP), whose running mate is Ibukun Solomon Owolabi. She is the second female contender in the Ekiti Gubernatorial race. She is 62 years.

The Labour Party, LP in Ekiti State picked Olugbenga Daramola as its consensus candidate. Daramola promised to deliver the state through the votes of the electorate to Labour Party and move it to the next level.

LP believes that Daramola will provide an alternative to the alleged misrule of the PDP and APC.

Oladosu Abiodun Fatomilola is the son of Peter Fatomilola a Yoruba actor. He’s contesting for the position of Governor. He’s a teacher, and Presenter and he’s been picked by the New Nigeria People’s Party, NNPP.

Ifedayo Iyaniwura is the General Secretary of The Inter-party Advisory Council (IPAC). He is contesting for the position of Governor under the National Rescue Movement, NRM which was established in 2017.

Kolawole is a former lawmaker representing Efon constituency in the state House of Assembly. He also served as Commissioner of Environment between 2015 and 2018.

Agboola Olaniyi Ben is a governorship candidate on the platform of the People’s Redemption Party (PRP) in the forthcoming gubernatorial elections in Ekiti State. Mr Agboola Olaniyi Ben has said that he will transform the state into a business and Agriculture hub in the governorship election come June if elected into the number one seat in the state.

Agboola who gave the hint in Ado-Ekiti shortly after which he emerged as the PRP governorship flag bearer in the state in June 2022 elections reiterated that he has what it takes to take Ekiti to the next level.

Oni who was governor between 2007 and 2010 in the state was defeated in the January 26 People’s Democratic Party (PDP) governorship primary by former chairman of the party, Bisi Kolawole, but subsequently dumped the party over alleged electoral malfeasance and irregularities during the primary.

Adebowale Oluranti Ajayi is the gubernatorial candidate of The Young Progressives Party, commonly known as the YPP. He’s a successful businessman. He’s the CEO of TAF Consulting Limited.

Kolade Akinyemi Adeolu is the gubernatorial candidate of the Zenith Labour Party, ZLP. ZLP is a reformist political party that is prominent in the South West.