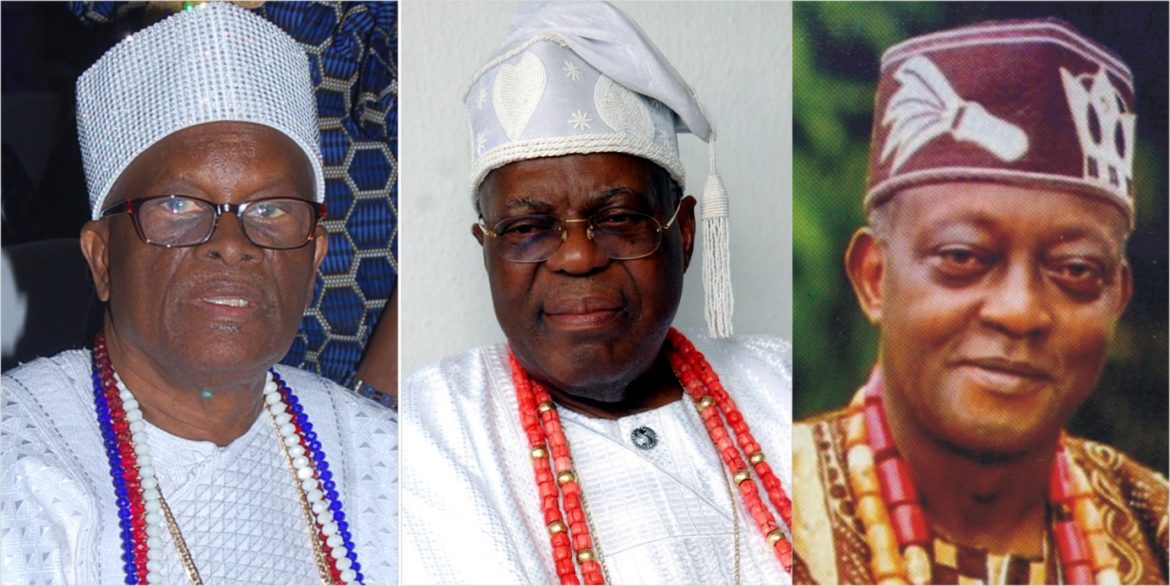 •Along With The Alake Of Egbaland

Many people do not know that Egbaland has 3 other Obas who rule along with the Alake who is the paramount ruler of Egbaland.  Whilst HRM, Oba Michael  Adedotun Aremu Gbadebo (CFR) is the Alake & paramount ruler of Egbaland, he is ably supported by Alayeluwa Oba (Dr.) Adedapo Tejuoso (CON) Karunwi (III) the Osile of Oke Ona Egba, Alayeluwa Oba Seburee Babajide Bakre, (JAMOLU II), the Agura of Gbagura and Alayeluwa Oba Adegboyega Olusanya Dosunmu (CON) (Amoro II) the Olowu of  Owu. Not only that. Many do not know that the Egba people started to settle in Abeokuta in 1830 or thereabout, with each Section settling in a separate quarter of the town. A strong system of relating with each other and general governance of the Kingdom was later developed. At its peak, the Kingdom covered a vast expense of land that stretched from River Oba on the North to Ebute Metta on the South, Osun River on the East to Ipokia and River Yewa on the West. The 4 Sections that formed the Egba Nation are EGBA ALAKE (Eku, Aarin and Agbeyin) EGBA OKE ONA, EGBA GBAGURA and EGBA OWU.

Government was carried out through a delicate balance of responsibilities among the following Institutions: OGBONI, OLOROGUN, OLOGUN, PARAKOYI & ODE.

The Ogbonis were the elite ruling class. They were in charge of making laws. They also judged cases,

discussed and advised the king in all affairs of the state. The society has a chamber (He Ogboni) in every township where meetings were held to adjudicate on the affairs of the Townships.

The Oloroguns were the war chiefs. They deliberated on military matters and advised the Obas on Wars and disputes.

The Parakoyis were the members of the Chamber of Commerce. They were charged with furthering the commercial interests of their towns. They regulated and protected free trade and visited markets to settle disputes.

The Odes were the warriors and they performed many war duties which included scouting, spying and guarding the townships against marauders and enemies.

THE TREATY OF INDEPENDENCE

The Treaty of Independence dated 18 January, 1893 made between His Excellency Gilbert Thomas Carter, Esq., Companion of the most Distinguished Order of St. Michael and St. George, Governor and Commander-in-Chief of the Colony of Lagos and on behalf of Her Majesty the Queen of Britain and Ireland, Empress of India, etc, Her Heirs and Successors, on the one part and the undersigned King (Alake) and authorities of Abeokuta representing Egba Kingdom, for and on behalf on their Heirs and Successors on the other part. We the undersigned King and Authorities do, in the presence of Elders, Headmen and people assembled in this place hereby promise: • That there should be complete freedom of trade between the Egba Nation and Lagos and, in view of the injury to commerce arising from arbitrary closing of roads, we the King and authorities, hereby declare that no roads shall in future be closed without the approval of the Governor of Lagos • That we the said King and authorities pledge ourselves to use every means in our power to foster and promote trade with the countries adjoining Egba with Lagos • That we the said King and authorities will, as henceforth, afford complete protection and every assistance and encouragement to all ministers of the Christian religion • It is further agreed and stipulated by the said Gilbert Thomas Carter, on behalf of the Queen of Egbaland, that so long as the provisions of this treaty are strictly kept, no annexation of any portion of Egba Nation shall be made by Her Majesty’s Government without the consent of the lawful authorities of the Nation, no aggressive action shall be taken against the said Nation and its Independence shall be fully recognized.

The said King and authorities having promised that the practice of offering human sacrifices shall be abolished in the one township where it at present exists and having explained that Bristish subjects already have freedom to occupy land, build houses and carry on trade and manufacture in any part of Egba Nation and, likewise, that there is no possibility of cession of any portion of the Egba Nation to a Foreign Power without the consent of Her Majesty’s Government, and it is desired that no special provision be made in regard to these subjects in this treaty.

Governor MacGregor of Lagos entered into a judicial agreement with the Egba Government whereby jurisdiction was ceded to the British Government for nineteen years in all cases where one or both parties to the suits are natives of the Egba Nation, and in all cases of murder and manslaughter.

Alake Gbadebo, accompanied by Prince Ladapo Ademola, Mr. Adegboyega Edun, Mr. R. B. Blaize, a Lagos-based merchant of Owu extraction went to England on a state visit, the first of its kind in Nigeria. They left Lagos on May 5 and arrived in Egbaland on May 25. On May 30, Alake Gbadebo was honoured with an audience and dinner by King Edward VII. On June 7, he was presented to the Duke of Marlborough and Sir Montague Ommaney at the Colonial Officer and on June 14, he interviewed the C.M.S Committee. He visited many places, including Aberdeen College and was presented with a Bible by King Edward VII on the eve of his return to Lagos.

Oyejola, an Egba man, who studied at the University of London and returned to Nigeria in 1906. He was later appointed as the Egba Government Medical Officer.

The Egba Government faced a lot of difficulties in providing potable water. Cases of guinea-worm and other water borne diseases were reported throughout Egba Nation. In 1905, the government sank wells but due to the rocky nature of the town, the project failed. At the first attempt, the Egba Government did record naturally, a few setbacks, one of which was in the sinking of wells. A stream carriage scheme by the Government (Farmers’ Association Scheme) in 1908 met total failure as the machine could not operate properly due to the rocky nature of the roads.

In 1910, the Egba United Government approached the British government for a loan of 30,000 pounds (N60,000) to build a water treatment plant and pumping stations. The pumping machines bought consisted of three locomotives of self-contained boilers; two Marshall Triple expansion surface condensing horizontal engines and a duplicate set of Ashley three-throw well pumps. Each set of pumps was capable of delivering 500,000 gallons of water in ten hours into the reservoir at a height of 301ft. above the river level.

The water scheme started immediately. This scheme greatly displeased a section of the public as some

Government ought to have waited till their own children were qualified to fill the post but the Government felt differently as it was eager to destroy the guinea worm and other water borne diseases caused by drinking impure water. The scheme was however completed in 1914. Sir Fredrick Lugard, Governor-General of Nigeria performed the formal opening of Abeokuta water works on 21st March, 1914, on the invitation of Alayeluwa Oba Gbadebo I, Alake of Abeokuta.

The loan was to be repaid by installment of 4,000 pounds and the first payment was made before the opening of the project. Every drawer of water was charged one penny for every ten potfulls (about two gallons) drawn.

The public protested against the former on the ground that it was an attempt to introduce house taxing.

The native traders petitioned the Government. Even Prince Eleko from Lagos and the white cap Chiefs “Idejo” pleaded with Egba United Government to cancel the Ordinance but to no avail.

Besides, there were other issues that crept up. The failures were minor when compared with the successes recorded by the Egba United Government. The Lagos Government did not dispute the fact that the Egba United Government encouraged Commerce, paid attention to schools, hastened economic development by improving communication, maintained Law and Order, provided health services and public utilities and, in general, gave Egbaland one of its most significant administrations.

With these and many other achievements scored by the Egba United Government, there was much progress in Abeokuta.

Egba United Government established the Abeokuta Industrial Institute in 1908. The establishment of the Institute was made possible by R. B. Blaize who provided 3,000 pounds (N6,000) from his estate for free training of the Egbas in technical work. Every apprentice was bound for 4 years and at the expiration of the training, the participants were presented with a set of tools worth 6 pounds (NI2) each.

Other Industries established during the period were: • First exportation of cotton to England was executed by Revd. Later late Bishop Ajayi Crowder; • First Com Mill worked in Abeokuta in 1849. First com-crushing machine was set up at Sapon in March, 1909. Brick-making was introduced by Mr. Champness of the Wesleyan Mission.

First brick was molded in Abeokuta on 18th June, 1863. • Publication of the first Newspaper titled “Iwe Irohin” by Revd. Henry Townsend in 1859. This necessitated the establishment of Printing Press in Abeokuta named by Egba printers.

Station) in 1901. The railway made the journey from Lagos to Abeokuta easier. It also helped to improve and advance the country; for it led to the opening of roads for traffic and carriages and the construction of bridges over rivers and streams.

Between 1900 and 1901, the government started to widen and level the existing roads and by 1905 was constructing many good roads in the Kingdom. Mr. David A. Taylor (a Surveyor and an Egba man) was appointed as the Superintendent of Works and Roads.

The first concrete bridge in Abeokuta, Sokori bridge, built by Egba United Government was opened by Governor MacGregor of Lagos on 18th July, 1903. The bridge was constructed by Mr. John Israel Adenekan without the supervision of any European Civil Engineer.

Lafenwa bridge over Ogun River was opened in 1911 in the year Egba United Government introduced Motor Lorries into Egbaland.

on education and gave much attention to the establishment of schools and promotion of education. In

1908, Abeokuta Grammar School was established as the only Secondary School then in Abeokuta city.

The school started in a rented small room at Ijemo Agbadu owned by Mr. John Macaulay. God used Ariyo Sorinolu as an instrument in His hands to revive the. Secondary School in Abeokuta until when in 1910, the school moved to Isale Igbein in Abeokuta. After a short period, the school was taken over by Abeokuta District Church Council and by gradual improvement; the school was developed into its present stage at Idi Aba, Abeokuta.

Although late Oba Gbadebo (Alake 1898-1920), the then Alake, was not educated, he took very great and unflagging interest in all that concerned Christian Religion and Education in Egbaland during his reign. He was the first to carry the first foundation stone of the building of the Abeokuta Grammar School.

It would be interesting to know that the very spot on which Abeokuta Grammar School formerly stood is rather historical. It is the first place in the whole Egbaland where higher school was established in the year 1861 for the purpose of imparting secondary school education not only in Egbaland but in

Nigeria as a whole and for some reasons had to be moved to Lagos which is still referred to as C.M.S

Inspector of Schools. His appointment marked the introduction of a proper system in school management. After the Government passed an ordinance relating to Education for the organization of the schools at Abeokuta, yearly grants were awarded to each school.

In 1923, the second Secondary School in Abeokuta, Baptist Boys High School, Oke-Egunya in Oba quarters of the town was opened.