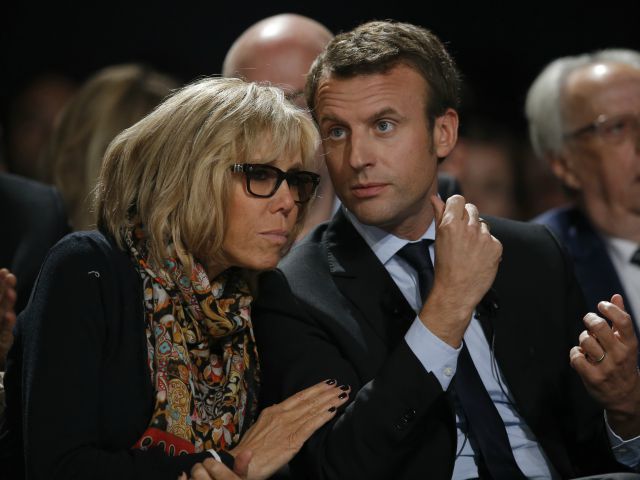 Emmanuel Macron who was yesterday elected the President of France has always had the backing of his wife, 65-year-old beauty supporting him all the way.

It has been revealed that Emmanuel Macron, the 39-year-old newly elected President of France is married to the love of his life, Brigitte Macron, who is 24 years older than him.

She has been his guide and coach since he was 15, and is playing an active role in his life leading to his massive victory at the Presidential election yesterday.

“Emmanuel Macron wouldn’t have been able to embark on this adventure without her,” said Marc Ferracci, a campaign adviser and a witness at the couple’s 2007 wedding. “Her presence is essential for him.” An outspoken 5-foot-4 inch former high school French literature and Latin teacher, Brigitte comes from a bourgeois family, named Trogneux, renowned for its chocolate factory in the Northern French town of Amiens. She was a drama coach at the private Jesuit school in the town in 1992 when she met 15-year-old Macron. He acted in her theatre pieces, with their association slowly developing into a romance that pushed her to divorce her husband and the father of her three children.

“We don’t have a classic family, that’s an undeniable reality”

Even after more than a decade-long marriage, their extraordinary union raises eyebrows and is bound to draw attention if and when the Elysee palace spotlights are turned on them.

Aware that they are breaking the codes of bourgeois and conservative France, the independent candidate and his partner of over 20 years have been laying the groundwork to preempt any potential personal attacks.

“They’re an atypical couple and this strengthens their relationship,” said Ferracci.

To get ahead of the story, they’ve opened the door to their lives, even being on the cover of glossy magazines like the biggest-circulation weekly Paris Match, with pictures in bathing suits during a seaside vacation. The April issue of British Vogue marvels at Madame Macron’s look: “a deep tan, a peroxide-to-honey blonde hairdo, an expensive designer handbag and car-to-carpet heels.” Meet the wife Of Emmanuel Macron The Newly Elected French President Who Is 24 years Older Than Him {Photos} was last modified: May 8th, 2017 by Arinze Ago