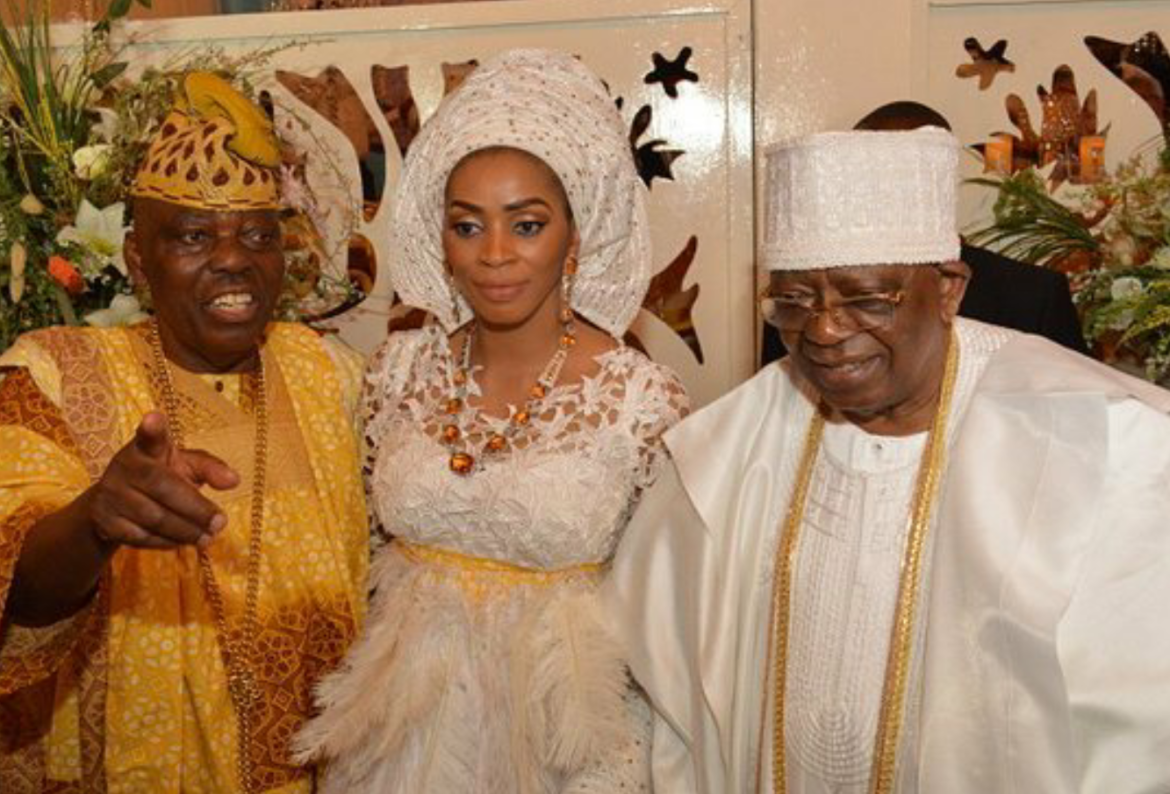 Have you noticed that these days, many rich grand old men, who are in their 60s, 70s, 80s, and 90s don’t look their age? For some strange reasons, they all look 20 years younger than their real age? I guess its because they live well, they eat well, they exercise well and they are married to pretty wives. They also take Vitamins and Supplements.

At the recent 40th birthday of Alhaja Folashade Noimat Okoya, many of these grand old men didn’t look their age. Many of the male guests,  though in their 60s, 70s and 80 looked quite younger. It was a formal event, a black tie event and all the men looked dapper in their different suits. 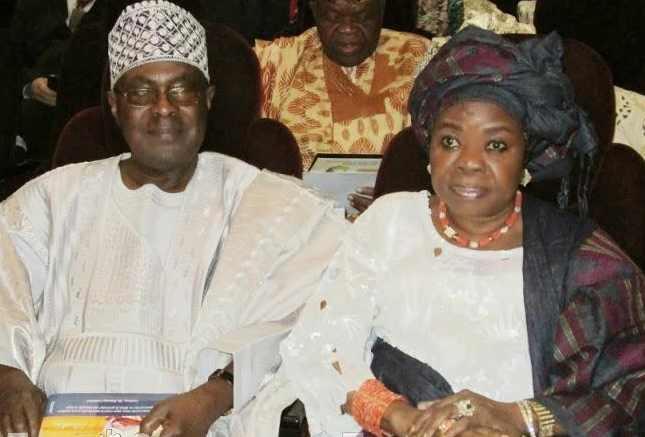 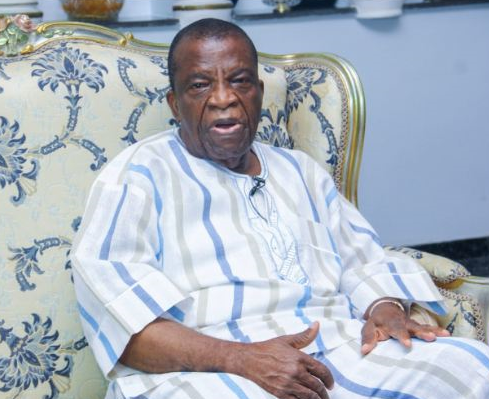 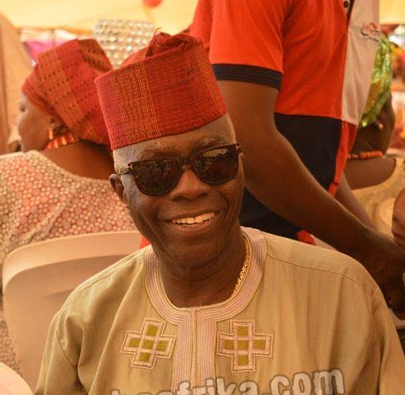 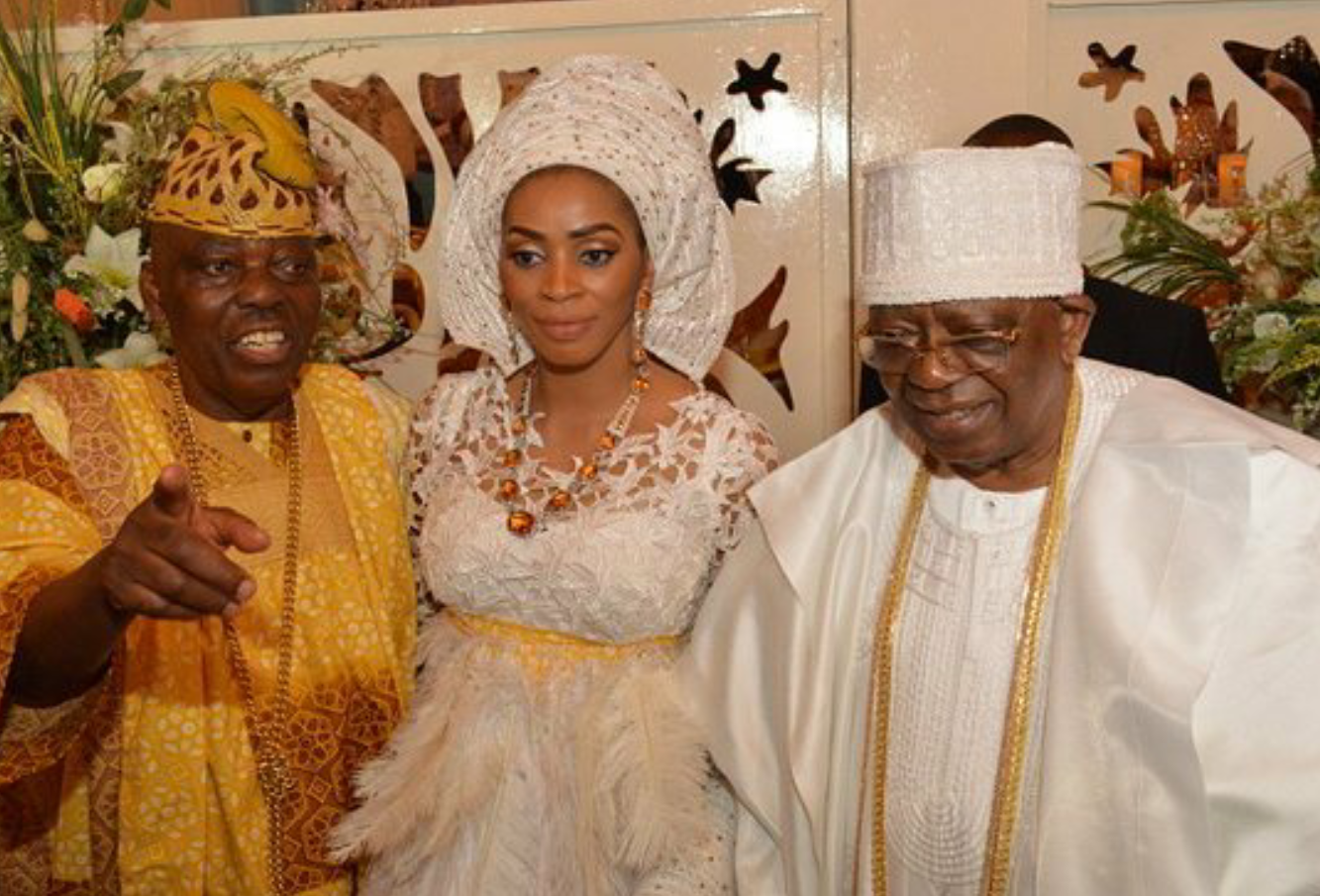 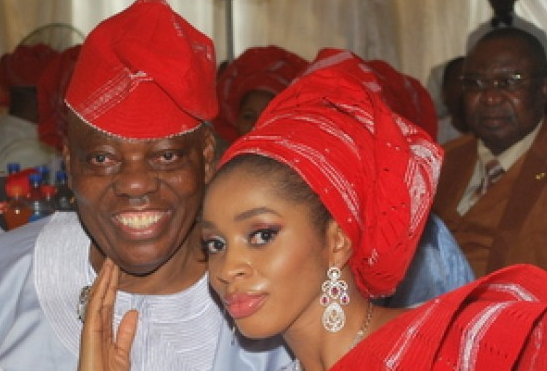 Justice Adesola Oguntade, a retired Supreme Court Judge, who is in his 70s looked 20 years younger in his dinner suit.

He was in black pants and white jacket. His ebony complexion glowed. His hair was neatly shaved. He looked handsome. He is Alhaji Rasaki Okoya’s best friend. The Chief Host himself,  Alhaji Okoya, the Chairman of Eleganza Industries, looked many years younger. He was on his feet throughout the event  at 77. That, undoubtedly was a proof of agility and good health. He wore a lovely black suit that fitted, making him look cute.

How about Chief Kessington Adebutu, who turned 80 two years ago? He does not look 80 at all. He was also in a lovely dinner suit. Baba Ijebu looked 20 years younger, as he mingled and exchanged banters  with guests.

Doyin Group Chairman, Prince Sam Adedoyin, who turned 80 last year, was also there, looking refreshingly young. At more than 80, he is as  fit as a fiddle. He uses no reading glasses, no walking stick, nothing and he still resumes at work 9am everyday without fail, unless he is abroad.

Otunba Adekunle Ojora, the boardroom guru, who is over 80 too was there with his ageless beauty,  Erelu Ojuolape Ojora.

Punch’s former Chairman, Chief Ajibola Ogunsola, was there also with his ever young-looking wife. The ever-smiling Ibadan Chief, is 73 is still as athletic as a sportsman. He was in a slim-fit black-suit. He is trim with no potbelly.

His Royal Highness, Kabiyesi Osinle of Oke Ona, Dr. Adedapo Tejuoso, came in mid way into the event in a flowing all white fila, agbada and white shoes to match with his 3 Olooris. Not many people have noticed Kabiyesi’s glowing skin. He has a baby-skin that glows.

When Evangelist Ebenezer Obey turned 75 about a month ago many of the  Octogenarians were there and they all looked refreshingly young. The celebrator  himself still looks young with his shiny ebony skin. Obey, who has been playing, Juju music for more than 40 years has managed to keep looking younger than his age. He is a birthday mate of Chief Niyi Adegbenro, a respected Egba high Chief.

On that day, King Suny Ade, who turned 70 last year, was on stage to thrill guests and his masterly display on stage wowed guests. He does not look or behave 70. He has also not slowed down one bit.

How about Aremo Olusegun Osoba, the indifatigable 2-time governor of Ogun State? He is well over 80, but this Egba-born astute politician, is as fit as a fiddle. He has continued to look ageless. Former President Chief Olusegun Obasanjo, who was the Chief Host at Obey’s party recently turned 80, but Baba does not behave like an 80 year old man. He is still very strong. On the day he turned 80, he started the day with a game of Squash. On a good day, he plays Squash sometimes at midnight or I am. He is a strong man, who spends more time in the air, traveling round the world delivering lectures.

There are many other eminent Nigerians who don’t look their age. One of them is the Awujale of Ijebuland, Oba Sikiru Adetona, who lives a good life. He is well over 80 just like Oba Shafi Sule, a respected Oba in Ijebu, but he keeps looking younger and younger. Chief Sunny Asemota  the Chairman of Sunny Motors, has not changed one bit. He still frequents parties at over 80 in his Indonesian cap with a clutch bag to match.

Many won’t believe  that Chief Akin Disu, the Eagles Paint Chairman, is 80. He turned 80 late last year a few months after his close friend, Chief Ernest Shonekan, a former Head of State and head of Interim Government, Chief Shonekan, turned 80. Their close friend, Ambassador Olufemi Fowora, an Ijebu high chief too is 80.

Chief Bode Emmanuel, the popular Lagos accountant is getting close to 80. He is preparing for a big party.  Another person who looks good at over 80 is Otunba Olasubomi Balogun, the founder of FCMB. Although, he is 85 he does not look it.

At his last birthday held at his Lagos home, the Oloori Omoba Akile Ijebu, was on his feet for more than 6 hours supervising his  own party. He joined the FCMB choir that sang some special Gospel numbers for him and danced for over 45 minutes with his wife, Oloori Abimbola.

His birthday attracted all the oldies, who are ageing gracefully. Chief Chris Ogunbanjo, the corporate titan was there. He is 90. He now lives in Eruwon. Chief Akintola Williams came. He is also in his 90s. At close to 100 he was still decked in suit.

Chief Subomi Balogun’s closest friend was also there. That is Chief Kola Daisi, who lives in Ibadan. They look alike. They both wear white agbada with white caps and shoes to match. Gen. Yakubu Gowon also does not look 80. He presided at the birthday. Don’t forget he was only 32 when he was head of State.

There are many more. Oba Oguntayo the Ajalorun of Ijebu Ife, is also 80. But he does not look it. Lt. Gen Alani Akinrinade is also one eminent Nigerian, who does not look his age.

So also Chief Ayo Adebanjo, one of the most respected Yoruba leaders. At more than 90 he does not use a walking stick. And he still bounces when he walks. He is mentally alert. It’s the same thing with Admiral Akin Aduwo, apart from his bushy beards that is grey, he does not look old. The same thing with Lt. Gen Theophilious Danjuma, he is also ageing gracefully.

He is in the same club with the Chairman of MTN, Chief Pascal Dozie. How about Chief Alex Duduyemi, the Aro of the source? He is over 80, but does not look it.

Chief Olopade is another man who is ageing gracefully, just as the Olowu of Owu, Oba Dosumu and the Alake of Egbaland, Oba Aremu Gbadebo. These are men who have maintained their youthful look.

Vetran Editor, Chief Areoye Oyebola is 80, but you won’t know. He is still very strong. The Ibadan-born veteran Editor of Daily Times is now in full retirement.

They are all in their 70s. Chief Bode Mustapha too. He is a keen golfer and that explains his slim stature.

Chief Biodun Shobanjo too still looks good for his age. Ace broadcaster Soni Irabor is 65, but he does not look it. Master compere, Bisi Olatilo too is in his mid 60s but he still dances and he is still active.

How about Lanre Ogunlesi, the Sophisticat boss? He will be 70 soon. He is already a grandfather, but he is still his trendy self. The Esama of Benin, Chief Gabriel Igbinedion is more than 80, but he exhibits uncommon strength. He is like the Balogun of Egbaland, Chief Atobatele, who is 71, but you won’t know. General Oladipo Diya too. He is more than 70, but he does not look it.

The same thing with the Alaafin of Oyo who is over 80 and still dances and boxes. He is a boxer and has a GYM in the palace.

Many also don’t know that ace Photographer, Sunmi Smart Cole, is 75, but he does not look. The same way Chief Femi Okunnu  who is over 80still goes to his chambers on Victoria Island, Lagos every day. Chief Fasinro too is more than 80, but he still very much agile. A few weeks back, Chief Yemi Ogunbiyi turned 70, but he still looks his athletic self. He is a keen golfer and he is very active. Another Icon who has continued to look good for his age is Asiwaju Bola Ahmed Tinubu. He is 65, but his boyish looks make him look a lot younger than that. Also on the list is Ijebu high chief, Olanrewaju Kassim popularly called Shokas. He is over 80 and looks young at heart.

Why All These Men Are Ageing Gracefully was last modified: May 29th, 2017 by Seye Kehinde