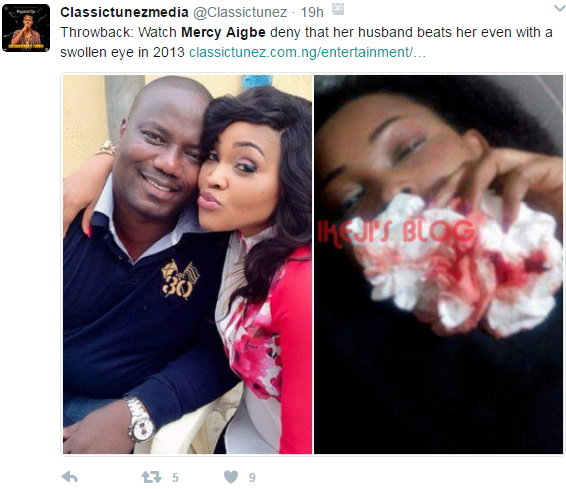 Since last Friday, the social media has been agog with the story and pictures of how pretty actress, Mercy Aigbe was beaten to pulp by her husband, Lagos hotelier, Larry Gentry. When the story broke online, the general conclusion was another Nollywood marriage is on the verge of crashing, the details are quite messy.

Like Tonto Dikeh earlier in the year, there are suggestions of domestic violence by Mercy Aigbe’s husband. The photos of a battered Mercy was posted all over. The reports suggest that the matter between the couple have reached a head and is all but over. On Friday 28th of April, 2017, the actress posted an Instagram photo that got fans wondering if she was being cryptic about the issues in her marriage as the message read, “calling for Nigerians to ‘say no’ to domestic violence.”

About the same time, her hotelier husband shared a now deleted post that said ‘Say no to promiscuous women.’ It didn’t take long for fans to deduce that something was wrong. By the end of the day, two photos of the actress badly bruised and battered surfaced online which reports that she has been hospitalized since last week for injuries stemming from a beating she received from her husband. From a close study one can deduce that the Aigbe-Gentry marriage was a toxic mix of mutual infidelity, lies, and pretence that was eventually broken by a financial crisis that worsened an already bad situation.

Mercy’s husband, Lanre Gentry came out to defend himself against the accusations as he took to his Instagram page and wrote, “Well, I know my wife. I did not have a hand in this because I have never beaten my wife and I will never beat her because I love her so much.” His reply came hours after the news broke on Friday that she was hospitalized for her injuries. The question remains, who did this to her face and what is the true story behind it? Mercy Aigbe went to a hospital to check if there are any injuries within her skull and brain. Although her husband Lanre Gentry continues to deny that he ever laid a finger on her, CT scans are recommended to check for swellings or fractures within the head, usually caused by blunt force trauma. In the fourteen years that they’ve been married, Mercy Aigbe and Lanre Gentry have played the role of a loving couple, often seen together at events.

With each passing scandal, it becomes apparent that either by design or fate, Nollywood cannot sustain a marriage. The carcasses of failed marriages that dote the entertainment landscape is as varied as it is bewildering.

Did MERCY AIGBE’s Husband Beat Her? As He Denies Wife Battering was last modified: April 30th, 2017 by Reporter

7 Obvious Signs Your Boss Wants To...