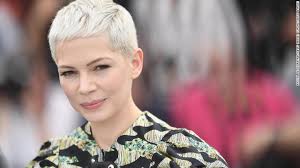 Actress Michelle Williams and singer-songwriter Phil Elverum have gotten married on the down low, a new Vanity Fair article revealed.

The two exchanged vows earlier this month in the Adirondacks in front of their two daughters and a few friends.

“I never gave up on love. I always say to Matilda, ‘Your dad loved me before anybody thought I was talented, or pretty, or had nice clothes’,” Williams told the magazine, referring to her daughter with the late actor Heath Ledger.

Ledger, who was with Williams for three years before the couple parted ways, died in 2008. Elverum’s first wife was diagnosed with inoperable pancreatic cancer in 2015 and died the following year.

According to Vanity Fair, Elverum pulled up stakes in Washington state earlier this month, and he and his young daughter, Agathe, have been living in Brooklyn with the four-time Oscar nominee and her 12-year-old.

“Obviously I’ve never once in my life talked about a relationship, but Phil isn’t anyone else,” said Williams, 37, who’s notably private about her personal life. “And that’s worth something. Ultimately the way he loves me is the way I want to live my life on the whole.”