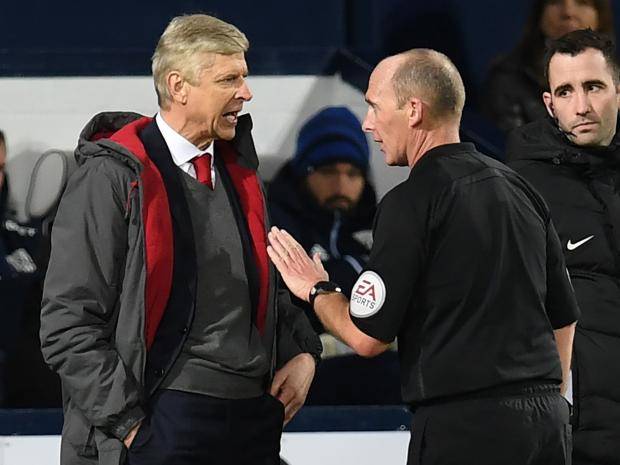 Mike Dean has admitted he made a mistake by awarding West Bromwich Albion a penalty in their New Year’s Eve clash with Arsenal, according to referees’ chief Mike Riley.

Dean and his team of officials were confronted by Arsenal boss Arsene Wenger after Calum Chambers was penalised for a handball in the 88th minute of the 1-1 draw at The Hawthorns.

Wenger was subsequently handed a three-match touchline ban and a £40,000 fine but, on the eve of the introduction of Video Assistant Referee (VAR) technology to English football, it has emerged that Dean has accepted he got the decision wrong.
“What is handball can look to you on the field of play if you get one look at it. But immediately there is evidence from another camera angle which shows actually the opposite happened. That is the safety net of the VAR.

“I think Chambers would have been overturned. The question you ask is, is it an act of deliberate handball? And the reverse angle shows him trying to bring his arm out of the way of the ball, rather than the reverse.

“I know Mike would have overturned it. He messages people, and he’s a very honest guy, and he goes, ‘I got it wrong’. He knows he did.”