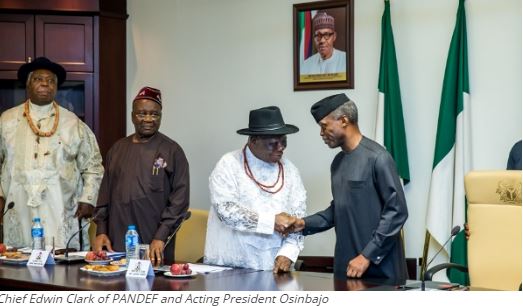 The Pan Niger Delta Conference, PANDEF, on Tuesday told the Federal Government that the Niger Delta region would not abandon the fight for equity and economic justice, notwithstanding government’s regular deployment of military forces to frighten the people.

PANDEF, led by former Federal Commissioner for Information, Chief Edwin Clark, who received a vote of confidence from the members, took the resolution at an emergency general assembly in Effurun, Delta State.

The group defied the threat by a militant group, Reformed Niger Delta Avengers, RNDA, to hold the Tuesday’s meeting.

The group had earlier threatened to disrupt the meeting, but unlike the October 26 assembly interrupted by the Police and DSS in Port Harcourt, Rivers State, the Police and Army provided security for the Effurun meeting.