Money Speaking: Mark Zuckerberg Made $4.7 Billion in The First Two weeks of 2017 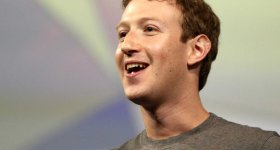 Facebook founder Mark Zuckerberg, earned $4.7 billion in the first two weeks of 2017! This large amount of cash makes Zuckerberg the biggest earner of 2017 so far.

This is really amazing if you consider that we just got into the new year; it’s like yesterday.

It’s more than the GDP of 41 countries — for the entire year.

It’s half as much as Donald Trump’s total net worth. (Source: Inc.)

According to reports, no single event was responsible for the immense growth, but links have been made to Facebook’s campaign to tackle fake news content online which made the Company share prices to hit an all-time high. Other reports hint at the fluctuations of the market.

Money Speaking: Mark Zuckerberg Made $4.7 Billion in The First Two weeks of 2017 was last modified: January 20th, 2017 by Arinze Ago