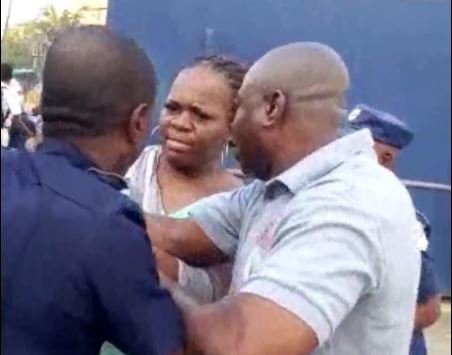 A video has been trending on social media platforms where a woman, whose daughter is a student of Queens College, was spotted fighting the security guards of the school.

Trouble started when the teenager was denied entry into the school for wearing make-up and fixing artificial eyelashes.

In the now-viral video that surfaced online on Tuesday, the mother can be seen talking to some members of staff while her daughter stands beside her.

Voices of some other women can also be heard in the background condemning the student for fixing eyelashes and painting her fingernails.

The woman is later seen taking her daughter away — when in a quick turn of events — she came back to hold one of the school security men by the neck.

Some other members of staff plead with her to let go but she refuses and complains that she was harassed by the security personnel.

The incident has since sparked a deluge of reactions on social media platforms especially Twitter where users have been registering their opinions on the matter.

While a number of users condemned the way the security guards handled the issue, others apportioned blame to the student’s mother for allowing her daughter to wear eyelashes and paint her nails to school.

“It’s shameful a mother would fight the security guards after the school authorities of Queens College sent her daughter home for fixing eyelashes. Some parents are responsible for their children’s bad behaviour,” a Twitter user said.

“Why would you be dragging & recording my child on the streets in the name of discipline like she’s thief & not think I’ll fight for her? Are you lot just looking for people to unleash your frustration & faux morality on? Queens College would have been sued if that were my child,” another user said.

Reliable Internet Service Is A Call Away With ISAT