Mourinho Always Brings The Best Out Of Me – Nemanja Matic 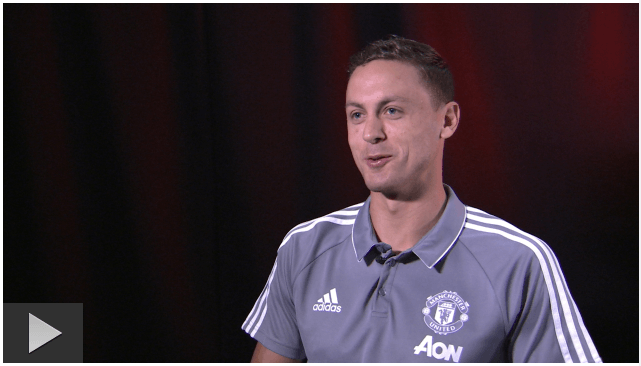 Manchester United new signing, Nemanja Matic has expressed delight to play with the Europa League champions, saying he feels really lucky to be at one of the biggest clubs in the world.

Matic who expressed this delight during an exclusive interview with MUTV said he is hoping to improve his game again as he always does when he works with United boss, Jose Mourinho.

“As we know, as I said, Manchester is one of the biggest clubs in the world. Also, my wish was to train with Jose [Mourinho] and, of course, when you have a coach like him and a club like Manchester is, you don’t need to think a lot so my decision was very easy.”

“Of course, of course. When the coach wants you to come to the club, it gives you more motivation, more possibility and I will try to, not try, I will, for sure, give my best to show that I deserve to be in this club and part of this group.”

“Yeah, I know them. With Victor, we have been together at Benfica, [in] Lisbon. Lukaku, I didn’t play with him because when I left Chelsea [the first time], he just signed there and I didn’t have an opportunity to train and to play with him. But I know him because we have played many times against each other. Both of them are great players and I think they are going to help Manchester to reach the targets.

Matic is expected to appear in United’s shirt for the first time in a competitive game when they face Real Madrid in UEFA Super Cup on August 8.
SEE ALSO: SEVILLA SIGN JESUS NAVAS AGAIN FOR FOUR YEARS

Mourinho Always Brings The Best Out Of Me – Nemanja Matic was last modified: August 1st, 2017 by Damilare Salami

I Predicted The Growth Of LEKKI-EPE Axis  7yrs Ago CEO of Assist-To-Sell, CHUKWUNONSO ONNY-EZEH