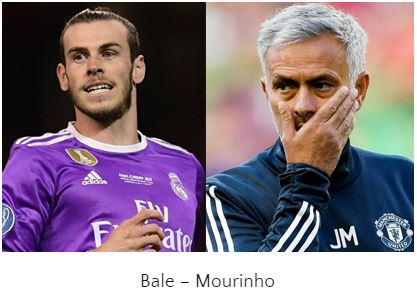 Manchester United manager Jose Mourinho has sent a message in the direction of UEFA Super Cup opponents Real Madrid by declaring his readiness to bring Gareth Bale to Old Trafford.
Speaking to reporters in the Macedonian capital of Skopje on Monday, Mourinho said he would wait to see what Bale’s role in Tuesday’s match was before deciding whether the Welshman was worth pursuing.
“If he plays tomorrow it is because he is in the plans of the coach and the club, and it is in his own plans and ambitions to stay there. Then I won’t even think about it,” said Mourinho of the 28-year-old.
“If he is not in the club’s plans and it is true that a player like Bale is at the departure gate, I will try to be there waiting for him at the other side.
“But if he plays tomorrow it is the clearest signal that he is staying there.” Bale moved to the Spanish capital from Tottenham Hotspur in 2013 but injuries restricted his involvement during last season’s run-in and he was only a substitute in Real’s 4-1 Champions League final win over Juventus in Cardiff.
He has been linked with a move away from the Santiago Bernabeu with Real among the clubs fighting for the signature of Monaco forward Kylian Mbappe.
The French teenager has been linked with an 180 million-euro ($212 million, £163 million) transfer although Manchester City are also keen and Paris Saint-Germain are believed to want him to play alongside their world record recruit Neymar.
Mourinho Ready to Make Move for Gareth Bale was last modified: August 8th, 2017 by Arinze Ago

Profile: Meet Chief Aloysius a.k.a Bishop Believed to be the Target of Anambra Church Shooting (Photos)