Profile: Meet Chief Aloysius a.k.a Bishop Believed to be the Target of Anambra Church Shooting (Photos) 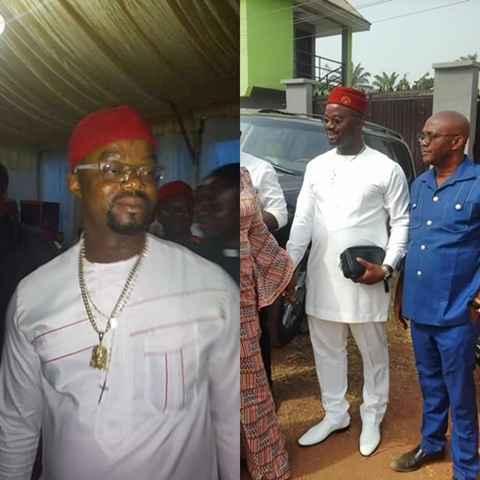 Ever since the bloody attack which resulted in the death of 11 worshippers while 18 others were injured, the target of the gunmen that stormed the church has been the subject of discussion.
It was gathered that the shooting in Anambra State was reportedly a spillover of a drug related feud, between two Ozubulu brothers who live in South Africa.
Reports have now revealed that the gunman who had invaded the church, was searching for Chief Aloysius Nnamdi Ikegwuonu popularly known as “Bishop”, a philanthropist based in South Africa, who is said to be having a prolonged misunderstanding with a relative whose name is yet to be ascertained. While speaking to a correspindent, a community member said that, “Chief Aloysius never forgets his promises to the people of Ozubulu, aside paying the aged people in Ozubulu, he includes the oldest men in Ozubulu like Okenye Amakwa, Egbema, Eziora and Nza…..”
“The four Obi in Ozubulu are now benefiting from Ebubechukwu uzo salary scheme”, the source said.
Further findings also revealed that the alleged target of the shooters, Chief Aloysius Nnamdi Ikegwuonu, Akuchinyere Nwata 1, engages in empowerment programmes as well as philanthropism in his home town. He also single-handedly built St Philip Catholic Church Umuezekwe Ofufe Amakwa in Ozubulu in which the unfortunate incident took place.
It was learned that in 2016, Chief Aloysius Nnamdi erected a multi-million naira mansion in his home town which attracted media attention at the time.
He is said to have tarred some roads in his community, Amakwa Ozubulu in Ekwusigo local government area, and had also contributed in the building of St. Aloysius Church of Divine Mercy, still in Ozubulu.
RELATED: The Story of Drug War Between Two Brothers That Led to the Bloody Massacre of Ozubulu Catholic Church Members
In fact, on May 1, 2017, the governor was billed to inaugurate some of the roads Ikegwuonu tarred in his community.
Although it couldn’t be confirmed if the governor later did, the commissioning was to hold alongside Ikegwonu’s 36th birthday celebration at St Philip’s, same church where the bloodbath took place two months after.
Ikegwuonu is also said to have a non-governmental organisation – Ebubechukwu Uzo Foundation Ozubulu – which is focused on members of his community as well as neighbouring communities.
Although there’s not much known about the NGO, its Facebook page shows pictures and details of programmes reportedly targeted at improving the lives of the people. Among the organisation’s objectives, according to the page, is “to assist churches in various ways in order to bring people nearer to God.”
Other objectives are “to assist in the development of quality education for children, youth, and adults” as well as “to help improve healthcare services for the people.”
A post made on March 9, 2016, said Ikegwuonu had instituted a salary scheme for the people of Ozubulu, including the aged.
“Chief Aloysius Nnamdi Ikegwuonu, Akuchinyere Nwata 1, Ebubechukwu Uzo Ozubuku, never forgets his promise to the people of Ozubulu,” the post read.
“Aside from paying the aged people in Ozubulu, he includes the oldest men in Ozubulku like Okenye Amankwa, Egbema, Eziora, and Nza. The four Obi in Ozubulu are now benefitting from Ebubechukwu uzo salary scheme “We, the people of Ozubulu will increase the fire in our daily prayers for Almighty God to give him more blessing and long life in Jesus name.”
Another post on the page dated May 1, 2015, shows a picture of pupils of Orumba Primary School at the birthday mass of Ikegwuonu, held in the same church – St. Philip’s Catholic church.
Ikegwuonu was also conferred with the ozo title, one of the most revered positions in Igbo land, by Igwe of Umuje (a.k.a Igwe Talu Nchara), according to a December 2014 post.
“Ebubechukwu Uzo receiving Ozo title as Uzochukwu Kwalu 1 of Umuje Anyamelum LGA on 14th Decemeber, 2014, after which he collected the title with the sum of N500,000,” the post read.
“The Igwe of Umuje said he gave the title to Chief Alloy because of his kind gesture to indigenes of Umuje.”
Profile: Meet Chief Aloysius a.k.a Bishop Believed to be the Target of Anambra Church Shooting (Photos) was last modified: August 8th, 2017 by Arinze Ago

All You Need To Know About Late...

20 Interesting Facts About Robert Mugabe You...

5 Nigerians and Others in Forbes Africa’s...