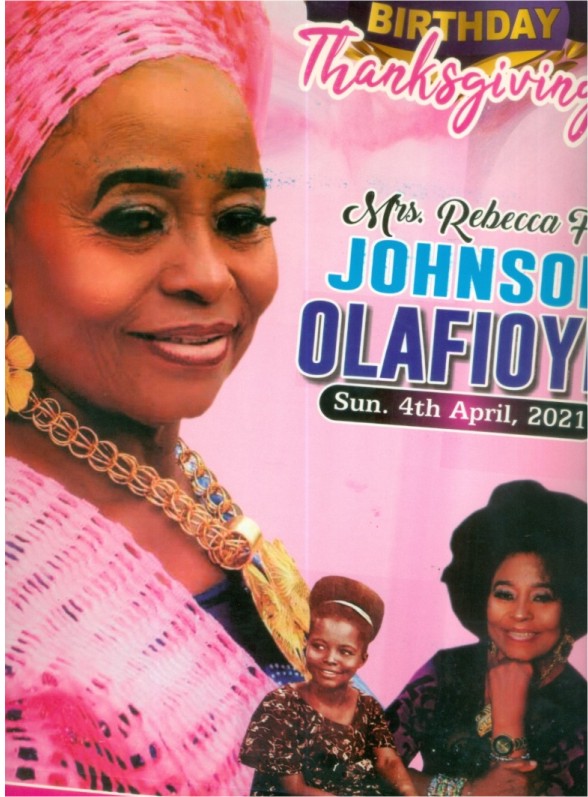 On Sunday 4th April 2021, a big birthday party shook Lagos to its very foundation, as top celebrities from all walks of life gathered at The Campbell Centre, 63 Campbell Street Lagos Island, opposite Lagos Island Maternity Hospital. It was the party to be that Sunday as a lot of celebrities stormed the party which took off at exactly 3.45 pm.

A lot of London celebrity ladies and big boys flew into Lagos for the party.

It was the 76th birthday party of Mrs Rebecca Adefolayemi Johnson Olafioye.

The birthday had been postponed since 2020 due to Covid-19 lockdown/curfew in Lagos State. With a new date fixed a lot of celebrity ladies prepared for it and bought Aso-Ebi. That was why it was well attended by celebrities from home and abroad.

The party wasn’t only a well-attended one but was also colourful and glamorous with different Aso-Ebi, ranging from sequence to voile lace in wine and gold colour code with chocolate brown headgear (Gele).

How did the celebrant look? She looked heavenly. Mrs Rebecca Adefolayemi Johnson Olafioye appeared many years younger than her age. She looked like a sweet 16 in her lovely dinner/peach bridal gown for the church service, with peach fascinator hat and a lovely wine dinner gown at the reception. She later changed into a native attire, a glaring evidence that she is not only a successful woman, but a successful home maker.

A devout Christian, she ensured that before anything else, God took centre stage as the celebration kicked off with a church thanksgiving service at the First Baptist Church, 24a Broad Street, Lagos where family and friends from different parts of the world gathered to thank God for her life.

Mrs Rebecca Adefolayemi Johnson Olafioye arrived the church venue at exactly 11.25 am in a white stretch Limousine with a bold happy birthday boldly written on the Limo.

She stepped out like a queen, which she is and cat walked on the red carpet with her lovely peach dinner/bridal gown and peach fascinator hat towards the church entrance.

The order of church thanksgiving was done in line with the usual doctrines of the First Baptist church, while melodious hymn were rendered by the church choir.

Many people testified to her wonderful attributes which were worthy of emulation and prayed for her continued success.

Her children rendered a special hymn in 1st Baptist hymn book YHB 588 to their mother that also gladdened the hearts of the congregation.

Rev. Dr. Sunday Aramide Fagbemi, the Pastor of the church gave a short message which he titled GOOD MOTHER IN THE HAND OF GLORIOUS GOD and his text is taking from the book of Psalms 71 verse 5. The Pastor said, mama is a lover of God, she is Christ like, she is an example of a child of God.

He said, the glorious God renew the strength in the life of a good mother.

The glorious God bring out the good in a good mother.

It wouldn’t have been good and glorious in the life of Mama if not for God.

He encouraged mama to keep on relaying on God as God cannot disappoint her.

He prayed for mama and her family and everyone present. There was General Thanksgiving after the sermon and after the church service, guests made their way to The Campbell Event Centre, Obalende for a grand reception. The venue is a relatively new event centre set up about 3 years ago. It has about 4 floors of parking and the 5th floor is where you have the hall that can conveniently sit 800 guests. The organisers obeyed all the Lagos State COVID-19 protocols.

From the entrance to the interior of the hall everything was magnificent. Life size portraits of the beautiful 76 year old celebrant were spotted at strategic corners of the venue.

Everywhere was sparkling with a touch of crystal gold.

The glass chandeliers, the accessories on the chairs and tables were all beautifully laid out by Goldit Event Planner. The beautiful CEO of the event planning company did a brilliant job. She planned the event so well that guests gave her kudos. She was on ground to make sure everyone was ok.

It was a thorough display of finesse expected of a pretty and elegant event planner of her class.

Guests in resplendent and exquisite outfits occupied almost all the seat. The venue was filled with family members, and friends of the celebrant and her children, which is evidence of the love and respect that the Olafioye’s children command.

THE MASTER OF CEREMONY

Dr. Tunji Sotimirin, a creative artist and lecturer at the Dept of Creative Arts UNILAG anchored the party. He made the party lively with his jokes. Don’t forget he is also a comedian. He wore his trademark Fila gogoro.

MUSIC WAS BY BOYE BEST

Popular highlife Juju band, Adeyinka Adeboye (Boye Best) was on bandstand. He thrilled the guests with his classical highlife Juju music while the party lasted.

It was indeed a fun filled evening as naira and dollar notes rained like they were going out of circulation, apart from the sumptuous meals and all kinds of drinks.

The party was top notch as dignitaries, political elites, and more were spotted everywhere.

They include: Biggest Nigerian Blogger in U.K Tolulope Adeoye, popularly known as Abike Jagaban. She looked so beautiful. She sat quietly on her table and was busy with her phone, most of the town.She is now a titled Chief. She has just bagged another new chieftaincy title.

The City People Magazine crew came in full force to cover the party. City People Publisher Dr. Seye Kehinde led his team of society reporters made up of Titilope Oshulalu, Nurudeen Akorede and Femi Adeleke were on their feet all through the party to be able to bring you exclusive details of what went down at the party.

THE DJ WAS GOOD

Immediately the DJ played Comfort Omogee’s CD Olorun mi, iwo ni ma sin titi aiye mi, amin o) meaning, my God, it is you I will serve till eternity Amen, the celebrant stood up to dance.

SO MAMA CAN DANCE

Biripo cultural group all the way from Ikale Local Government, Okitipupa in Ondo State took the dancing floor as Mrs Rebecca showed us her dancing steps while she dance to Biripo song.

City People had a chat with the celebrant, Mrs. Rebecca Adefolayemi Johnson Olafioye.

How do you feel today?

I feel good and well

No secret, I love to look good right from my youth, is now I don’t fast again, because i reduce my fast from 6 to 6 about 2 years ago to 12pm now, reason is, I don’t know how to visit an herbalist or Alfa, so, I love God and I go to church, assuming you were in the church today,

you will hear what the Pastor said about me. That Pastor is just 15 years in my church. He was referring to what all the past Pastors have told him about me, I love God and I believe only God can do what no man can do. I love to work, I am hardworking, I am not lazy and I hate dirt, I love to appear neat, even when I have 2 clothes, I want to look good in the 2 clothes each time I  come out.

When I was selling food opposite City Hall, I sold yam and beans. When people come to me for food and say they don’t have money to pay, I give them food to eat.

My children went to Holy Cross School, during break time, they come home with their friends to eat and I will give all of them food to eat.

When I travelled to London to see my eldest daughter, someone walked up to me and said Mama Onisu ati Ewa (meaning Mama that sells yam and beans). The person said, we used to come to your shop back then in Nigeria. We will eat and run away without paying for the food we ate. The man gave me a lot of money that very day. It is good to be good, it is not by my power, nor by my might, but, it is the grace of God.

If you check one of the pictures on the portraits by the high table inside this hall, the one I was wearing a band on my head, was when I was 15 years. I took the picture beside the swimming park in Museum Centre.

As a grandmother and great-grandmother, what advice do you have for females or mothers?

My advice to females and mothers is for them to be tolerant. If you are dating a man or married to a man, commit the man unto the hands of the Lord in prayers. Don’t go into prostitution because of money. Be patient, if you think the man is not the right man for you as a young girl, leave him and move on, don’t smell what you cannot eat and you a house wife, don’t go into adultery because of money. Be patient. Seek the face of God. Believe in God and He will answer all your secret prayers.

I appreciate the media and everyone one present here today, I want the media to specially thank my children, Olufunmilayo, Olatunbosun,Omobolanle, Omonike, Oluwamuyiwa and my last born Ibitoye. I pray God will take them back safely to their destinations IJN.

And also I want to say thank you to Almighty God for sparing my life till today, over my family, children, grandchildren and great-grandchildren, Father I am thankful.

The celebrant turned out looking good in her blue and white native attire as the MC anchored the cutting of the birthday cake with her children, friends and family.

There was presentation of gifts from the celebrant children and friends.

Let’s tell you about the story of Mama Olafioye. She was born 76 years ago in 1944 on June 10 to be precise, at Ilutuntun, Ikale Local Government, Okitipupa in Ondo State, to late Papa Amos Oloja and late Mama Bosede Amos (Nee Arogun)

In 1956, she attended sewing school “Thompson House” at Igbosere, Lagos Island under the proprietress Mrs Thompson.

After the completion of sewing, she proceeded to work with Mrs Pearce at Odunfa Street Lagos.

In 1965 after she was employed as a Nursing Assistant with the Italian boss at Federal Palace Hotel to look after their children.

She was part of the crowd that welcomed the Queen of England. Queen Elizabeth the II to Nigeria during Independent in 1960 at Tafawa Balewa Square, Lagos Nigeria.

Mama Olafioye is a loving, and a very hardworking mother. She is a successful business woman. She embarked on so many businesses in Lagos and last popular one was selling of food at Igbosere Lagos (IYA FUNMI ONISU ATI EWA) opposite City Hall, on Lagos Island where she fed thousands of people who benefited from her good gesture and by given food to the less privileged.

She retired from food selling business after the demise of her husband, and later had a petty trade which she completely retired from in September 2019.

She is a Jerusalem Pilgrim (JP) and she has visited various countries in Europe.

She is greatly loved by her children and everyone around her.

READ ALSO: HOW TO WAGE WAR AGAINST DANGEROUS DREAMS