Home News My Experience With The Shooting of The Film, Ayinla – Day 2
News

My Experience With The Shooting of The Film, Ayinla – Day 2 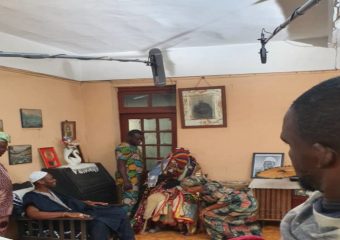 Today is actually day 9 or 10 of the shooting of the film Ayinla, but it is Day 2 of my diary of a few of the interesting events around it.

Our visit to Ososa and Ipara took place days before the filming of the movie in Abeokuta began.

In the past three days I have been to 2 locations in Abeokuta since filming started. The first was on Saturday, a police station in the Ibara GRA area of town. There was little to report. The crew were just milling around and no filming was going on. I left.

The second was on Sunday evening, at Ake, behind the Palace of the paramount ruler of Egbaland, the Alake, at the location chosen as Ayinla Omowura’s residence during his life time.

The external scenes in Ake were incredible. The entire community came out of their homes and gathered in the big square in front of Ayinla’s house to watch the filming.Tk would surely not need to invest in any ‘waka pass’ actors, these are passersby-actors in the background during filming of some major scenes.

I watched the production at Ake, a particular scene inside Ayinla’s apartment where he welcomes a neighbourhood masquerade. The conversation between them was not part of the original script, but an absolutely natural and brilliant improvisation that must have been inspired by the actors living in the spirit of their characters.

The acting was out of this world – hilarious, spontaneous, dramatic and colourful.

Lee Evans, the African American sports legend who was with me, could not get over the experience long after we left.

It was a fantastic experience watching TK and his team of producers at work from very close quarters. In a few days TK had grown more grey hairs and plenty of additional worry-lines on his face. His eyes were bloodshot from lack of sleep and from peering for long hours through the lens of a camera like a sniper in a war zone.

Filming is on-going all day and part of every night. I could see, just as many in the audience of watchers confirmed in conversations going on in the sidelines, that this movie has all the potentials and trimmings of a blockbuster.

I am getting really excited.

TK called me early on Sunday morning to give me the message I had been quietly dreading – my part in the movie will be shot on Thursday morning. I should prepare for it.

Butterflies start to rumble in my stomach. All my bragadocio of an Eagle coming to conquer Nollywood disappears. I am shaking like a leaf. This is my litmus test.

All day Sunday, I wrestle with my simple lines, thinking I need to memorize them. Every time, I will mentally manufacture a good reason to set it aside. It is too short. It is too simple. I will nail it in a few minutes. I don’t need to spend hours memorizing a few lines. Am I not Big Seg? How can a few lines defeat me even if I am afraid that part of my brain that crams information may have shut down from disuse a long time ago?

A debate is taking place in my head. Football and acting, which is psychologically tougher?

A big football match never consumed and frightened me. I never developed butterflies in my guts. With football, I was always in a comfortable zone, a terrain I had mastered – how to ‘hide’ behind opposing defenders when tiring, how to feign an injury when I make a wrong pass, how to gesticulate and blame the referee when I run into an offside position, how to blame another when I miss a shot at goal. I could always get away with ‘mistakes’ in a match with some clever acting.

Not so here, I am thinking, in a movie. I am exposed, not so comfortable and not confident at all. I am bluffing my way through and only admitting it here in the safety of my diary.

Nollywood is an unfathomed area, uncharted territory for me. Terrifying. In a film, you will repeat and repeat a scene. I prefer the single take of live television. In a film shoot, every retake is evidence of a previous failure. I hate retakes. Somebody please help me.

These are the thoughts racing through my mind since TK gave me my filming schedule. All my earlier ‘sweet talk’ about some past acting records and prowess have evaporated, and reality stares me in the face.

A film is an eternal documentary. I will either be applauded or crucified!! I comfort myself. There is no place to hide anymore. I shall be ready. I need Uncle Jimi.

I have watched Uncle Jimi act at close quarters. He chews up acting with the ease of Lionel Messi doing things with a ball.

When TK offered me a role on Ayinla, I knew this day was going to come when I would need a boost in confidence, courage, reassurance and inspiration to take me through the Wahala I would be putting myself into by accepting.

That’s why I had convinced TK to accompany me to Ipara for my own ‘pilgrimage’ after completing his own cultural communion in Ososa with Hubert Ogunde. I needed to drink from the fountain of the best actor in my world – Uncle Jimi Solanke. He now lives in Ipara.

TK had achieved his objective for the trip to Ososa. It was written all over his face as we departed the ‘Living Home Museum’, the final resting place of Chief Dr. Hubert Ogunde. His spirit was lifted.

TK knew the terrain very well. He had been there many times in the past. He worked with the late legend on 2 of his 4 epic movies – Jayesimi and Ayonmo.

TK ran a live commentary of their relationship as we drove to and from Ososa. He had fascinating stories to tell. How the man had very peculiar habits, his eye for even the smallest details in production, and his perfectionist tendencies. He trusted experienced White film producers from the UK because he would not settle for anything less than the best. He funded his own projects and invested heavily to acquire latest production equipment for his films, props and stage shows.

We spent over an hour on our guided tour of the estate with one of Chief Ogunde’s grandchildren, the current curator of the museum. The tour was like going through a day in the life of the man. His home was still intact and ‘alive’, as if time stood still. Most things were still the way they were 30 years ago when he died – the different rooms, the office, the library of artifacts, the converted garage, and so on, each one a caretaker of priceless memorabilia from his life, his works, his culture and his arts.

We were not allowed to take pictures of the interior of the cool and well kept main house. It must cost a fortune to maintain the ambience.

There was an eerie feeling of the man’s presence, his spirit hovering like a friendly ghost, watching unseen over everything, from the entrance through the rest of the main building, every space a treasure trove of historical memorabilia – books, magazines, publications, costumes, equipment, artifacts, are works, and pictures that tell different stories about the man’s journey through life, where he went, what he did and the people he met. It is a gripping historic excursion.

The entire house is a cultural throve; tons of spectacular costumes that he used in all his plays and films; various unique and epochal sculptures and works of art; different Yoruba traditional masks, masquerade costumes and staturettes; reels of some of his old films; an old projector, film production equipment; gramaphones and vinyl records.

There were 2 special corners housing two traditional shrines, dark and not for the faint hearted or fickle minded, altars of the gods that demonstrated awesome powers in some of his most memorable films.

Chief Ogunde must have been a man of impeccable taste and style. His wardrobe of exquisite traditional clothes and handmade shoes are feasts for the culture and art pilgrim.

Outside, to one side of the house, were a few more old antiques – 2 trucks used for conveying the troupe of actors, dancers and production crew to venues around the country; the skeleton of an old aeroplane engine used to create swirling clouds for the storm scenes in Ayanmo.

The rest of the museum comprised bungalows for his wives and foreign production crew, plus a large semi-covered hall for rehearsals.and, probably, some in-house performances.

The Living History Museum is appropriately named. It breathes the spirit of Hubert Ogunde that hovers over the estate. It is a great experience to walk through the life and works of one of the greatest Yoruba socio-cultural ambassadors in history.

Two hours after arriving Ososa we were done.

Words cannot adequately capture the real essence of the museum. It is a great learning experience of the man and his remarkable works, achievements and place in Yoruba history.

I am still trying to understand and to fully appreciate why TK needed to make that visit to Ososa. As we drove away it was obvious he got what we came for. He was happy, relaxed and excited.

Our next port of call was Ipara, for my own inspirational pilgrimage.

We arrived Ipara which is just a hop away from Ososa. Uncle Jimi Solanke had been excited when I called and told him TK was coming with me to see him. He actually screamed in joyful expectation.

When they eventually met, by the side of the road where Uncle Jimi waited to meet us and to lead us into town to his new home, they hugged like long lost friends.

My Experience With The Shooting of The Film, Ayinla – Day 2 was last modified: December 31st, 2020 by Segun Odegbami

My Experience With The Shooting of The Film, Ayinla – Day 1

My Experience With The Shooting of The Film, Ayinla – Day 3