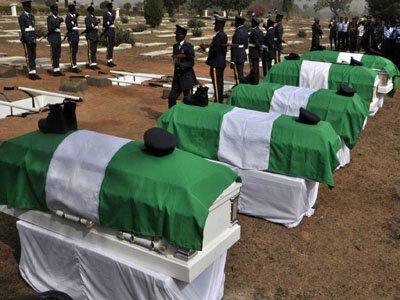 They broke down in tears as the remains of the five Air Force personnel were interred in Abuja with full military honours, accompanied by the traditional 21 gun- salute.

Some senior officers also fought back tears as they bade the fallen heroes farewell at the National Military Cemetery, Abuja.

Air Marshal Abubakar said the death of the five crew members aboard the Nigerian Air Force Mi-35M Helicopter that crashed in combat in Borno should spur all Nigerians to resolve to fight all agents of destabilisation and extremism in the country.

The CAS said the time has come for the nation to throw all it has into the on-going battle against Boko Haram insurgents in the Northeast and ensure that the war end as soon as possible.

He asserted that the death of the five crew members and other fallen heroes in the on-going war against Boko Haram Terrorists should not be in vain.

“These five heroes met their untimely death on 2, Jan. 19 at Damasak in active Service of our fatherland. These gallant heroes lost their lives in the pursuit of the peace which we all enjoy and often take for granted. We salute the courage of these young men, whose lot it became to give their lives for this purpose.

“The loss of these courageous and professional gentlemen must spur the rest of us not only to rededicate ourselves in the service of our Nation, but also to resolve that we expose and fight all agents of destabilisation and extremism in our society.

“We must throw in everything we have to this fight to ensure that our departed colleagues did not die in vain. We must do everything possible to bring the ongoing insurgency in the Northeast to a speedy end that is favourable to our nation.