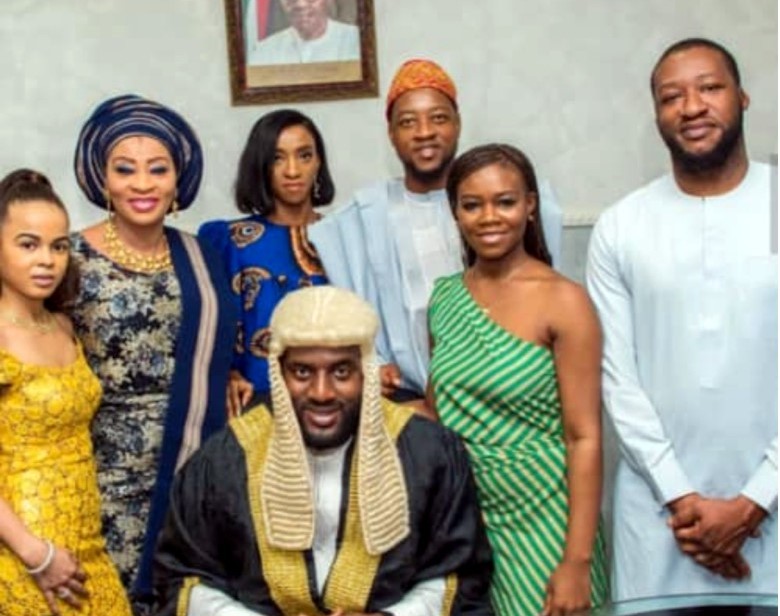 It is no longer news that Oyo State has a young Speaker. He is  32year old Hon Debo Gabriel Ogundoyin. But the real gist many don’t know is that Hon Debo Ogundoyin is the son of popular Ibadan society woman, Chief Mrs Tina Ogundoyin.

She is one celebrity woman who has dominated the Ibadan social scene for over 3 decades. She is also one of Ibadan Society women whose name regularly comes to mind whenever Ibadan society women are being discussed. She is one of those who never fail to make strong and outstanding fashion statements, earning her a place also as a fashion icon.

Despite being a grandmother, her disarming beauty and in-depth knowledge of fashion are just some of the things she has going for her and which makes her relevant till date. A successful businesswoman, she runs several business ventures among which is an oil and gas company. She has a Filling station in Ibadan.

The new Oyo Speaker, RT Hon Debo Gabriel Ogundoyin also got his good looks from his  57year old Mum. You can’t also have a father as handsome and rich as late Chief Adesegun Ogundoyin, the late Erunwa millionaire and sports lover and not be as fit and attractive looking as Hon Debo Ogundoyins.

There is no debating the fact that the new speaker is good looking.  What many do not know is that the 32-year-old lawmaker got his good looks from his fair-skinned beautiful mother. Though Chief Mrs Tina Ogundoyin has lived all her life in Ibadan. She attended St Theresa’s College, Ibadan and has her clique of friends who she has been close to for many decades. His parents’ good deeds must have been the reason many came out for him en masse when he contested for Ibarapa Constituency in Eruwa, Oyo State.

How was growing up like for Hon Speaker of Oyo? How did the mother feel when her son became the Speaker? Did he ever see it coming? What makes Hon. Debo Ogundoyin different from his siblings? These were among the many questions City People Assistant Society Editor,  ABIOLA ORISILE asked a few days ago. Below are excerpts.

How did you feel the day your son became the speaker of Oyo State?

I was more than happy. My joy knew no bounds. It is the joy of every mother to see her kids doing well in Life. He is young but very promising. I was more than elated to see that he made history as the youngest Nigeria Speaker in history. May all parents eat the fruit of their labour. May we not be found wanting on their day of joy.

You are often called the mother of the Boys, what is the speaker’s position among his siblings?

He is the 2nd child of my Boys.

Just like his other siblings, his growing up was hitch free. He has never bothered me. He schooled here in Nigeria. He went to Babcock University and read Agriculture. He came out with 2.1. He is very brilliant. Even while he was small, despite how rich we were, he didn’t take SMA gold. He left breastfeeding at 6months and took to only Ogi“(corn Pap).

How long has he been in politics?

It is not how far but how well. It is all about how many lives have you touched. He has been in politics for a short while but he has been able to make a big impact. He is never tired of giving to the less privileged just like his dad. This must have made him the choice of his people.

What was he doing before he joined politics?

He runs a farm with his friend, Sola Ladoja, the son of former Oyo State Governor, Governor Rasheed Ladoja.

You lost your husband very early, how long ago was that?

It will be 28years in June 18 that I lost my husband to death.

How old was he when his father died?

If you do the calculation, he was only 4years Old.

It is God that brought me this far. I don’t envy people.  I am content with what I have.

Tell us about your relationship with Ayo Julius?

We have been friends for a very long time. We started at Ibadan. We were friends from school. Both of us attended St. Theresa’s College, Ibadan. Her senior sister also attended the same school. We had been friends before we even thought of getting married. It is a very long history. We are more than friends. We are now sisters. We are one big family.

I can’t really say, but we became friends in the early ’70s. It’s been a very long time. I won’t refer to her as a friend, we have become family.

From what we heard, you are into Oil & Gas. For how long have you been doing the business?

Well, I have been on it for like 3 to 4 decades, and there has been no change. We move the way it is moving and it is a profitable business.

You are a grandma, but you still look very young and beautiful, how does that make you feel?

Well, it is the God’s grace. Like I said earlier, we shouldn’t put too much burden on our head. Do your best and leave the rest for God and don’t stress yourself unnecessarily. Secondly, the youth of nowadays, the way we bring them up is not the way our own parents brought us up. Then we were always seen working and moving from one place to another. We were very hardworking, but that is not the same way we bring up our children now.

For instance, the world has really changed to the extent that you can do almost everything with your phone without going out for a month. You can run your business with your phone and it has really made some of the youths so lazy. But as for me, it is good to exercise the body, that is why we walk from one place to another to keep the body and soul together.  And it is just a few people that have that gift. So I bless God for that.

What is the secret of your ageless skin?

To God be the glory, it is God. And when you don’t carry a lot of burden on your head.  Do your best and leave the rest. Take a lot of water and make sure you have time to relax when you do all that, everything will be fine.

Let us talk about the fashion aspect. You are a fashionista. Where does the inspiration come from?

To God be the glory.