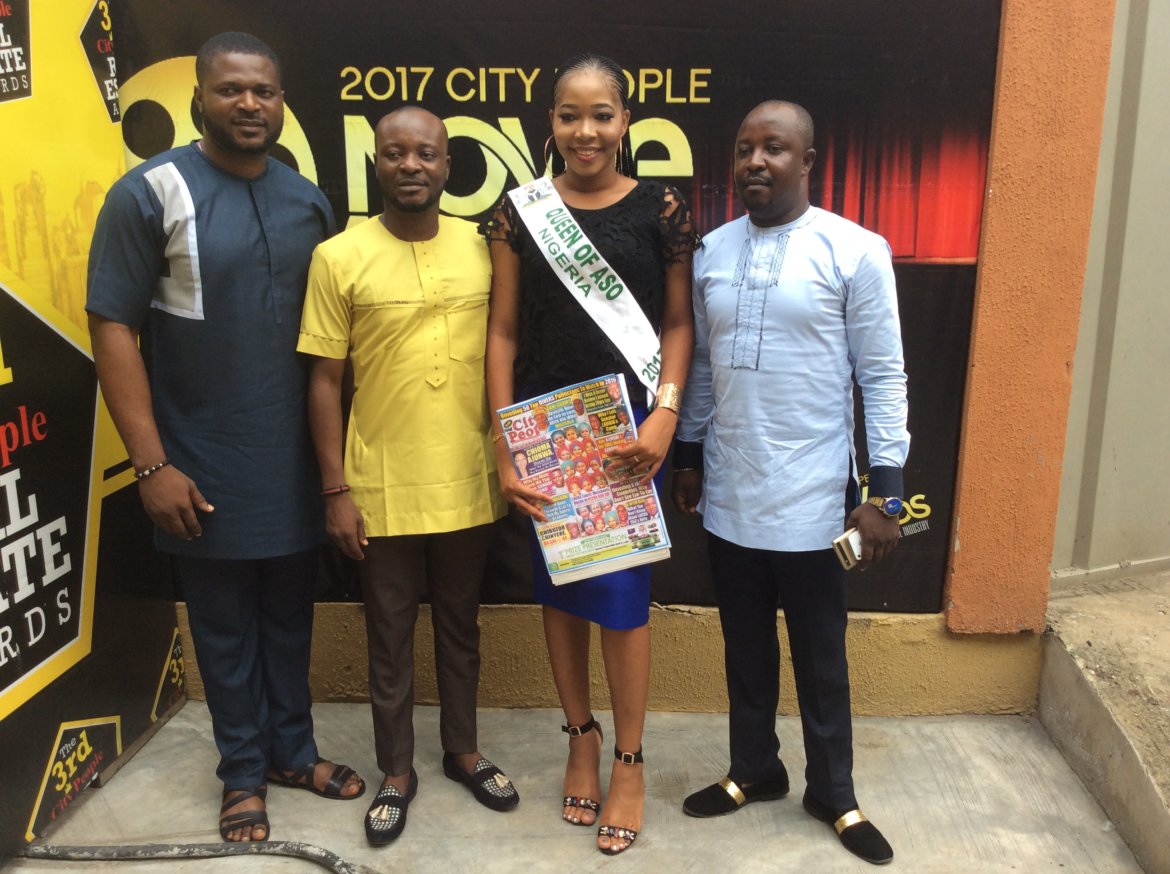 Queen of Aso Nigeria is a big brand to beat when it comes to pageantry in Africa. The brand has over the years proven to be a formidable force in the bid to preserve African cultural heritage and values as it has produced 12 beauty Queens who have competed at the international stage since  2005.

The brains behind this initiative: Desmond Agboola, Kingsley Agboola and Obafemi Adebowale visited City People’s Corporate office on Thursday, November 16, 2017 with the new Queen of Aso, Faithfulness Kennedy, to reel out plans for the year and their aspirations for 2018.

I am Desmond Agboola, the CEO of Queen of Aso Nigeria. The brand has been in existence for the past 12 years in Abuja and it exists to promote the cultural heritage and the tourism value of Nigeria. As we all know that we are blessed in Nigeria with a lot of Tourist sites as compared to what we can see anywhere around the world.

Every year since the past 12 years, we have been having queens that will represent the face of the brand and also represent Nigeria at the international level in various competitions. The reigning queen will be representing Nigeria at the Miss Tourism Universe coming up in April 2018 in Mexico.

Last year for the first time in the history of the pageant, we brought the event to Lagos, where we had the event proper at Oriental Hotel, we also did the Aso Outstanding award for selected Nigerians who have distinguished themselves in various fields of endeavor and thank God Dr Seye Kehinde was one of the selected few who bagged the award last year.

This year, we have been working on some projects as the new queen is having a PET project on Child Abuse and rape in society.  About last month, we had a sensitization campaign in Port Harcourt, where we tried to sensitise and have a concert with the aim to educate the people on the issue of rape. How we have to reduce the risk on our teeming young girls and also impressing it upon the government to introduce stiffer punishment for anyone found guilty of this crime.

The Queen was also at the National Assembly, where she addressed the parliament on the issue.

This  birthed the Project we Tagged Kick Against Child Molestation in Nigeria.  We are going to have a concert and a novelty football match where celebrities will be playing selected beauty queens in Nigeria and Africa generally. It is going to be hosted by the wife of the vice president and other important dignitaries will be there. The event will come up on the 6th of March, 2017 in Abuja. This will be the fourth of its kind.

How was it like from the start and how far can you say you have gone?

We’ve had a lot of progress since we started. At the beginning, nobody understood what we were doing, so the level of support and acceptance was not as much as we have now. But year in, year out, a lot of people are beginning to show interest. We have also been able to scoop support from private sectors and a whole lot of people. This is what prompted the need for the awards, to appreciate the people that have contributed to the advancement of this cause.

Explain the concept behind the Queen of Aso.

The Aso rock is a rock in Abuja, very unique. That’s where the seat of power is and also the Aso Rock is  a very big rock, almost about 960 feet above sea level and a very unique rock that seats close  to the 3 arms of government in Nigeria. When we started off, we were looking for a face that will be like a face of Nigeria, someone that will represent Nigeria. So we say if Aso rock can be seen as the seat of power, why don’t we have a name that has to do with Aso. Aso means victory in Gbagi dialect in Abuja. And Gbagi people are the predominant people in Abuja. In the past years during the war, the Gbagi people would run inside the Aso cave as a fortitude and means of hideout from enemies. That was how we came about Aso for the brand. That is where the name ‘Queen of Aso came from’.

What are the benefits of being the Queen of Aso?

The Queen will have a brand new car as her price. Also she gets to represent Nigeria at international pageant contest just like Miss Tourism Universe. She will be contesting with about 80 to 90 other beauty queens from various countries. The event comes up April next year. Also she has the opportunity to work on her pet project. She will work with quite a lot of federal ministries  in Abuja to carry out projects within the time of her reign.

How can one sign up to contest for Queen of Aso?

It’s open to all Nigerians around the world. We have auditions in various cities across Nigeria and Africa. We collect the forms and we converge all the girls for auditions with panel of judges who will select the  best 30 among them. The 30 will be in camp for about two weeks. This is where we note their level of intelligence, charisma, beauty and other factors. The age limit is from 17 to 26 years. Once you are out of secondary school or you are in the higher institution you  are eligible to contest. .

What inspired the idea of Queen of Aso?

We started this as a magazine way back in the university, Nasarawa State University. The magazine covers happenings within the social and political scene in the school and around the environment.

My brother conceived the idea of pageantry. We decided to first introduce an NGO to help the less privileged and as we began to gather momentum, we decided to give the brand a face, lika a Queen who will champion the cause within the next one year. That’s how we started the idea of the Queen of Aso.

How I Won The Queen Of ASO Crown – Faithfulness Kennedy