Neymar Could Face 2-Year Jail Term For This Reasons… 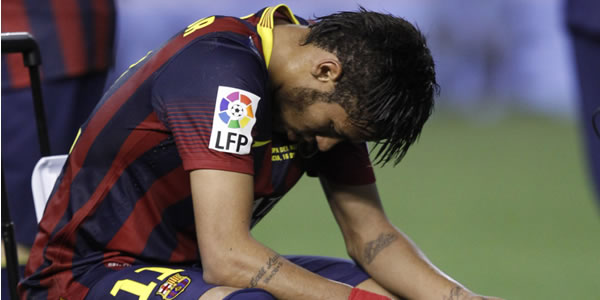 A report on Thusday says that Barcelona star Neymar alongside his parents, will stand trial on fraud and corruption charges.

This charge also includes his current club Barcelona and former side Santos.

The Spanish National Court also ordered that Barcelona president Josep Maria Bartomeu and the man he replaced in the role – Sandro Rosell – will be tried.

The alleged “business corruption and fraud” offences relate to Neymar’s transfer to Barcelona from Brazil-based side Santos in 2013.

All parties involved deny any wrongdoing.

Brazilian investment group DIS alleged it received less money than the 40 per cent it was entitled to from the disputed transfer fee and filed a lawsuit, which has resulted in a trial that will now go ahead after all appeal options were exhausted.

Prosecutors want a two-year prison sentence for Neymar, although as he is a first-time offender that would be unlikely to result in jail time in the Spanish system.

They are also seeking fines of €10 million against the Neymar family.

Final appeals against the prosecution proceeding from the 25-year-old, his parents, Barca and Santos had been rejected in February, while Bartomeu’s failed last week, prompting this court order.

Neymar Could Face 2-Year Jail Term For This Reasons… was last modified: May 4th, 2017 by Damilare Salami

6 Ways to Ask for Help Without Being Embarrassed