Home News Nigeria Buy $593m Worth Of Warplanes, Arms From US
News

Nigeria Buy $593m Worth Of Warplanes, Arms From US 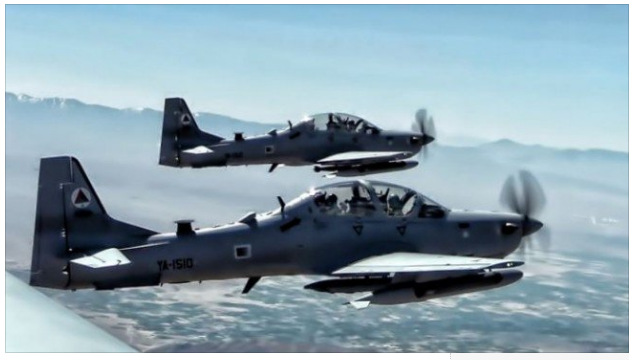 The Federal Government of Nigeria has bought warplanes and ammunitions worth $593m from US.
Reuters reported that the Pentagon notified the US Congress on Monday of the sale to Nigeria of 12 Super Tucano A-29 planes and weapons.
The Super Tucano A-29, an agile, propeller-driven plane with reconnaissance and surveillance as well as attack capabilities, is made by Brazil’s Embrae
The news agency said the move was announced by the Pentagon’s defense security cooperation agency.
The US had placed an embargo on arms sale to Nigeria owing to allegations of gross human right abuses against the military.
In 2014, the government of Barack Obama turned down entreaties by former President Goodluck Jonathan for the sale of arms needed to fight insurgency.
The US government couched its decision on the Leahy Law which prohibits the sale of weapons to countries with records of human rights abuses.
Critics also opposed the decision of administration of President Donald Trump to sell arms to Nigeria.
Writing in War on The Rocks, an online policy discussion platform, Matthew Page, a former top expert of the US state department, accused the President Muhammadu Buhari government of violating human rights and misplacing his priorities.
He also alleged that the Nigeria air force officer who went to the US to negotiate the contract in July 2015 “has since been charged with corruption”.
Page wrote: “The Department of Defense will soon notify Congress it plans to sell 12 A-29 Super Tucano light attack aircraft to Nigeria. Both countries hope that the propeller-driven warplanes — tailored for counterinsurgency operations — will bolster Nigerian efforts to combat Boko Haram, one of the world’s deadliest terrorist groups. U.S. policymakers also want the sale to be a visible symbol of their strong desire to do more to help Nigeria combat terrorism.
“Unfortunately, the sale will be a Pyrrhic victory for five reasons: It is way too expensive, it undermines U.S. corruption policy, it overlooks recent human rights abuses, it won’t help Nigeria fight the Boko Haram of tomorrow, and it won’t foster closer defense cooperation.”
According to Page, who co-authored a forthcoming book, ‘Nigeria: What Everyone Needs to Know’, the country should be encouraged to buy a squadron of Brazilian-American turbo-props which are “way cheaper”.
In November 2016, Amnesty International, human rights watchdog, released a report alleging extra-judicial killing of 150 pro-Biafra protesters by the army.
The organisation had also condemned the killing of more than 300 Shiites by soldiers in Kaduna in December 2015, and it called for a probe of the killings.
The army had set up a panel of inquiry, comprising its members, to probe the allegations. But it cleared itself of any wrongdoing.
However, following agitations by the human rights groups over the composition of the panel, the government set up an independent panel to investigate the allegations.
The panel is yet to conclude its assignment.

Nigeria Buy $593m Worth Of Warplanes, Arms From US was last modified: August 29th, 2017 by Damilare Salami