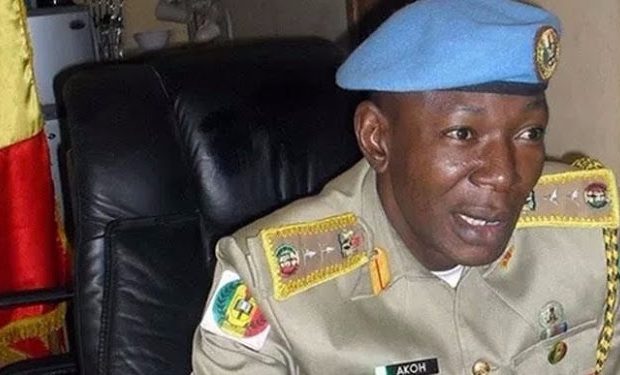 His arraignment is coming 11 days after Akoh was detained at the Special Anti-Robbery Squad (SARS) unit of the FCT Command.
DAILY POST reports that, Akoh was detained on Sunday, 19th March 2017, when he turned himself in, having heard that the Police was looking for him.

All entreaties by well meaning Nigerians for Akoh to be released, proved abortive.

Meanwhile, the Police had earlier sued the National Commandant with a 90-count charge, bordering on extortion of money, wearing of uniform, hoisting of flags, money laundering and running an outlaw organisation, the suit which was first allocated to Justice Gabriel Kolawole.

It was, however, disclosed thereafter, that, the Chief Judge of the Federal High Court, had transferred the case to Justice J.T. Tsoho’s court.

Akoh was first arrested on February 28th, 2017, along 49 others, on the day the National Headquarters of the Corps was launched.

They were detained at the Force Headquarters for 3 days and later released after “some female Journalists protested that, the nursing mothers among the detainees be released to attend to their babies after 3 days.”

Irked by the seemingly violation of their fundamental human rights, former Attorney-General of the Federation, Chief Kanu Agabi (SAN), slammed the Police and DSS with a N2bn suit, challenging the arrest, harassment and detention of Akoh and others.

Consequently, Justice Gabriel Kolawole issued a 12-day ultimatum to the Nigeria Police, to advance reasons for such treatment.
The Police has, however, reacted to the ultimatum in a counter affidavit deposed to, on 22nd March 2017; denying harassing the Akoh and 49 others.

At the resumed hearing on Wednesday, the Prosecution Counsel, A.K. Aliyu asked that the 90-count charge be read to the defendant.

Though the Presiding Judge demanded that the count charge be compressed, to enable the court take all while the defendant also take his plea; but Aliyu objected to it.

After reading the count charge for over an hour and with the end not in sight, the court arose for a 20-minute break, to continue with the reading of the remaining count charge