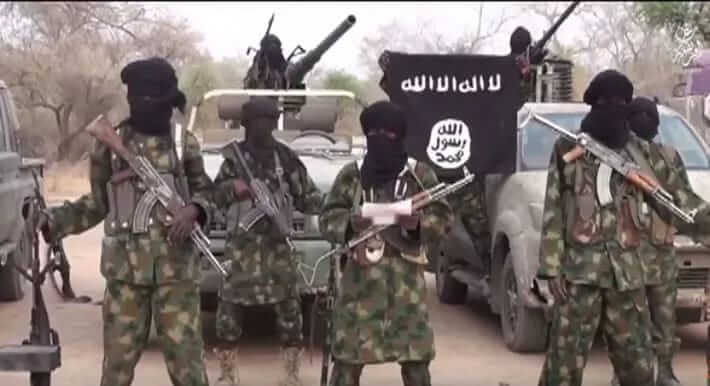 The 2017 Global Terrorism Index, GTI, has been released, and Nigeria for the third year running remains the third most terrorised nation in the world.
The country, which has been battling the Boko Haram insurgency in the North-east for many years occupied the same ranking in 2015 and 2016. It was ranked fourth in 2014.
Like Nigeria, Iraq and Afghanistan have not had their ranking changed in the past three years. The two countries are ranked first and second respectively in the 2017 GTI.
Among the first 10 countries that suffered the greatest impact of terrorism in 2016, according to the report, are Syria, fourth; Pakistan, fifth; Yemen, sixth; and Somalia, seventh.
India, Turkey, and Libya are ranked eighth, ninth and 10th respectively.
The GTI, which is in its fifth edition, is produced annually by the Institute for Economics & Peace, an independent, non-partisan, non-profit think tank with offices in Sydney, New York and Mexico City.
The GTI monitored and measured the impacts of terrorism in 163 countries, which covers 99.7 per cent of the world’s population.
This year’s report was launched on Wednesday in nine major cities across the world, including London, Paris, Washington D.C, and Brussels.
Even though Nigeria’s ranking remained unchanged, the report said that the largest improvement in 2016 as far as terrorism is concerned occurred in Nigeria “where terrorism deaths attributed to Boko Haram decreased by 80 per cent”.
The report said, “Nigeria recorded the biggest decrease in terrorism with 3,100 fewer people killed compared to 2015.
“This reflects both the success of the Multinational Joint Task Force against Boko Haram as well as fractures within the group.
“Boko Haram’s decline also contributed to significant reductions in deaths in neighbouring countries with Cameroon, Chad and Niger collectively recording a 75 per cent reduction in deaths or over 1,000 fewer deaths”,the report said.
The report said that Boko Haram, which was the deadliest terrorist group in 2014 with 6,700 deaths, is now the third deadliest terrorist group, with their total number of attributable deaths dropping to 1,079 in 2016.
Only a single terrorism attack in Nigeria is recorded among the 20 most fatal terrorist attacks globally in 2016, compared to 2014 where nine of such attacks took place in the country.
The attack is reported to have occurred in January 2016 in Dalori when assailants armed with firearms and explosive devices raided the village, killing 88 people.
Globally, deaths resulting from terrorism decreased by 13 per cent to 25,673 in 2016, the report said.
“Deaths have now fallen by 22 per cent from the peak in 2014”, it said.
ISIL, according to the report, was the deadliest terrorist group in 2016. The report said the group killed 50 per cent more people than it did in 2015.
“The year 2016 was the group’s deadliest year ever with ISIL accountable for 9,132 deaths; the majority of which occurred in Iraq.
“ISIL undertook attacks in 15 countries, which is four more than the previous year. ISIL affiliated groups killed a further 2,417 people and undertook attacks in another 11 countries, although this is six less than the previous year”,it said.
Boko Haram, the report said, does not have sophisticated financing structure, unlike ISIL, al-Qa-ida and the Taliban.
“The group has historically relied on one time operations to fund its activities.Some of the most common fundraising techniques include abductions for ransoms, kidnapping, extortion of various businesses and bank robberies.
“Boko Haram has also been known to raise funds by utilising a network of alliances with other terror organisations including receiving funding from Al-Qa’ida in the Land of Islamic Maghreb”, the report said, adding that the group sometimes received financial support from corrupt politicians and government officials.
Via Premium Times
Nigeria Remains Third Most Terrorised Country As Boko Haram Killings Reduce 80% was last modified: November 15th, 2017 by Arinze Ago

Against The Odds with Peace Hyde: “Women are Vital to the development of a country”, former president Nana Konadu Agyeman Rawlings

Farewell To The Man Who Put AIYEPE...