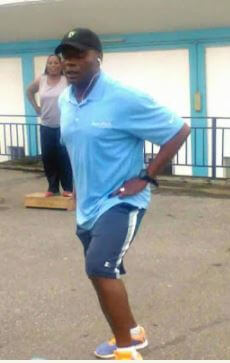 A popular sports coach and fitness trainer in Cross River State, Paul Banigo slumped and died in UJ Esuene Stadium, Calabar on Saturday, November 4th.
Below is the account by Rt. Hon. Orok Otu Duke, CRS Sports Commission:
“He jogged into the UJ Esuene Stadium in the morning to keep a rendezvous with the members of the public and sundry state Athletes, who had adopted him as their personal coach and Aerobics Instructor. However, today’s rendezvous turned out to be with death.
As coach Paul Banigo was putting together his exercise tools, he slumped and cried for help, but none was rendered. All those present, initially ran to different compass directions, for sundry reasons. Paul Banigo died.
The Stadium Clinic is not functional and I am working with the Hon Commissioner for Health to remedy this anomaly. Today’s tragedy caught us by surprise and came to us at a time that we are financially unstable. Since no hospital would accept Coach Banigo’s Corpse without the requisite financial commitment, we were left in a quandary. But initial help came our way through ex Gov Donald Duke and his wife Onari… (God bless Their Benevolent Souls). Mrs Duke reached out to the Navy Hospital, Calabar and they agreed to receive the body for “autopsy and embalmment”.
We have visited the hospital for the third time this night, the Corpse is in good hands and His Excellency, Governor Ben Ayade has been briefed accordingly and the needful will be done.
As a staff of the CRS, Paul had taken up the extra responsibility of taking up those who had recently been dislocated from using the House of Assembly hill for exercise purposes, due to recent security concerns. On the fateful Saturday morning, Paul died on duty, on official duty. But when he fell, initial help could not be rendered. Not even a CPR? So sad.
The 8 years relegation of the Sports Commission created the rot… No Ambulances, offices, buses,facilities etc. The process of rebuilding the infrastructure and repositioning sports is on and it is “work in progress”.
The CRS Governor will fund and staff the UJ Esuene Stadium Clinic, we are committed to work with the Commissioner for Health, SA Budget and the CRSHA to achieve this with the 2018 Budget.
No avoidable tragedy should befall us again in CRS Sports family. Never Again.
Rest in Peace Coach Paul Banigo.
Rt. Hon. Orok Otu Duke JP
Chairman,
CRS Sports Commission.
Nigerian Coach, Paul Banigo Slumps and Dies During Training (Photos) was last modified: November 6th, 2017 by Arinze Ago