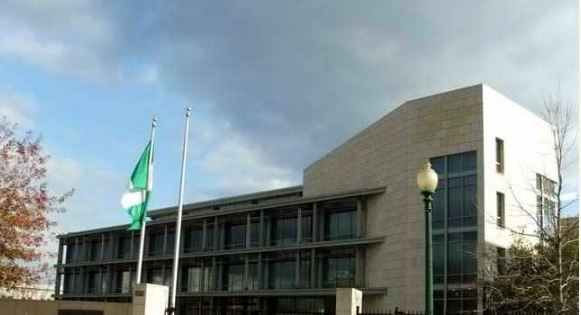 Activities at a Nigerian embassy in the U.S have collapsed over the inadequate funding of the office by the government.

Workers at the Nigerian Embassy in Washington have been on a sit-in, paralysing activities at the mission in the United States, according to Channels TV.

The workers said they have not been paid salaries for the past five months, forcing them to embark on the strike.

Although some departments of the embassy are said to still be functional, they threatened to report the embassy to the U.S. Labour Department.

There were no official functions at the embassy on Tuesday, as the workers only gathered at the lunch room in the basement.

The embassy in Washington and the consulate in New York are said to be currently cash-strapped, with staff and local workers not being paid for months.

A source close to the Presidency said there has been a lot of mismanagement of resources in the Ministry of Foreign Affairs, causing a lack of concern for staff welfare and difficulty in the missions being able to carry out their functions.

In a contrasting report by the News Agency of Nigeria, the report of the closure has been debunked. The swift response claims the Nigerian Embassy in Washington is open and fully operational, acting ambassador, Hakeem Balogun, has said.

Balogun told the correspondent of the News Agency of Nigeria (NAN) in the U.S. that the report making the rounds that the embassy was shut down was false.

“The embassy works as normal; as we’re talking now, I’m still at the office working. So it is not correct for anybody to say that the embassy is shut down; there was nothing like that.

“But there was a sit-in by some local staff who said they would not work over some arrears but it wasn’t as if the embassy was shut down.

“Even some of those who were supposed to embark on sit-in were still working and did not join their colleagues.

“They have been paid up till March 2017 but there were some arrears of October to December 2016 that were yet to be paid.

“It was just an agitation to draw attention to the three months arrears owed them but not only them, some ministry staff were also affected.

“But what they have done was to cry out about the arrears for everybody to hear and everybody has now heard,” Balogun said.

The Nigerian envoy explained that the Federal Government was making efforts to clear the arrears and ensure that salaries and allowances were up-to-date.

According to him, the Ministry of Foreign Affairs is aware of the issue and other challenges facing the embassy and is gradually addressing them.

“The ministry is making every effort to ensure the arrears are paid and you will recall that the virement was sent to the National Assembly for approval by President Muhammadu Buhari.

“Now the virement has been approved. As soon as the money is released, all arrears will be paid,” Balogun said.

Nigerian Embassy in Washington Shutdown Over Non-payment of 5 Months Salaries was last modified: May 3rd, 2017 by Arinze Ago