Home News Why Nigerians Are Crazy About ALABUKUN
News 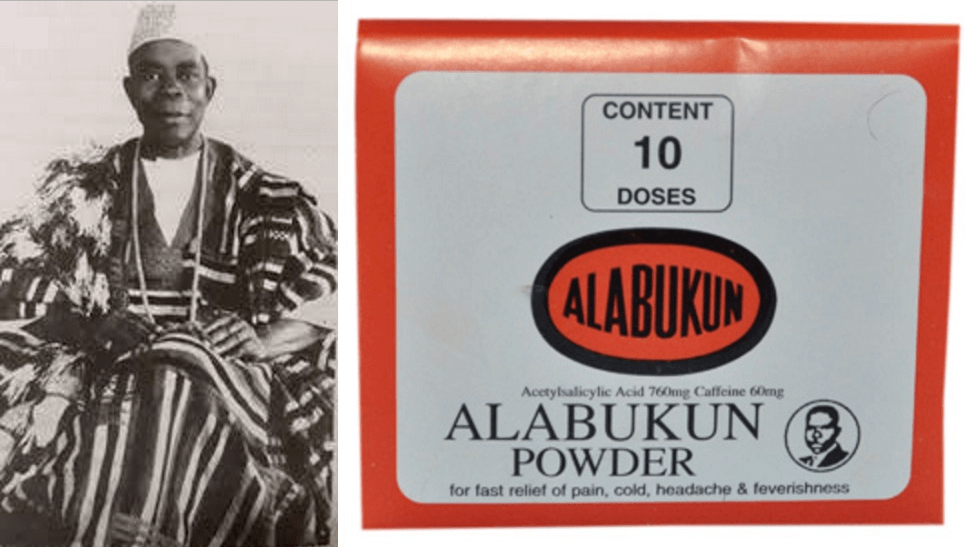 How It Was Founded 100 Yrs Ago

Analgesics, all over the world, are very commonly used by people to give them immediate relief for their headaches, body weakness, malaria etc. Here in Nigeria, there are hundreds of popular Analgesic brands but perhaps the most popular of them all is Alabukun. Invented as far back as 1918 by Jacob Sagboye Odulate, Alabukun powder has grown to become Nigerians member one panacea for body pains, headaches, cold, malaria etc. And it is so cheap and affordable.

For N70 you can pick one satchet around the corner. That is how many people rich and poor, old and young, all got hooked on that white powder that treats practically all ailments. So hooked to the Alabukun powder many have become that one begins to liken it to addiction. Strange as it may sound, it is common place to find theousands of people who cannot leave their homes for their offices or parties without a satchet of Alabukun tucked inside their pockets or bags.

Such is the confidence and faith many have in Alabukun. As far as these Alabukun faithfuls are concerned, if it is not Alabukun, it can never work like Alabukun.

This is why today in Nigeria, majority of the people can’t do without this drug. Alabunkun is one of the oldest drugs in Nigeria and it  is still very relevant and popular today. However, not many know the Jacob Odulate aka Blessed Jacob, a Nigerian Pharmacist, inventor and entrepreneur is  the brain behind the brand that has remained relevant, selling in all parts of Nigeria, Benin Republic, Cameroon, Ghana and some parts of Europe.

Jacob Sogboyega Odulate aka Blessed Jacob was born into a polygamous family in 1884.

He was originally from Ikorodu in Lagos State but later moved to the neighbouring Ogun State.

At age 14, he trekked for three months from Ikorodu before reaching Abeokuta to establish himself.

Blessed Jacob managed to create a brand from what served as his consulting room and workshop in Abeokuta. His modest headquarters was at the Sapon Area, not far from where he later built his famous three-storey building in Ijemo Agbadu.

In 1918, he invented the legendary Alabukun powder which is now a hit in the world’s most populous nation and in other West African nations.

He sent his children to study at some of the best universities in Durham, Newcastle, United States of America and London. e.g Mrs. Folake Odulate (later to become Chief. Mrs. Folake Solanke) who is the first female lawyer in Nigeria to wear the silk and she also became the first female Senior Advocate of Nigeria (SAN). In 1966, she established the first law firm by a Nigerian female at Ibadan, Oyo State and named it Alabukun Chambers in honour of her great father.

Apart from making the drugs, the energetic Blessed Jacob also produced other brands like Alabukun mentholine, other preparations and an annual journal called Alabukun Almanac which was widely distributed in Abeokuta and eventually all over Nigeria between the 1920s and 1950s.

Jacob Odulate, the man who invented Alabukun Powder Over 100 Years Ago left a massive  legacy behind. He was known everywhere for his tenacity and ability to get things done, even in the midst of overwhelming challenges. His name will continued to be mentioned as one of the foremost inventors, whose innovative idea has changed millions of lives all over the world.

Why Nigerians Are Crazy About ALABUKUN was last modified: November 3rd, 2017 by Reporter