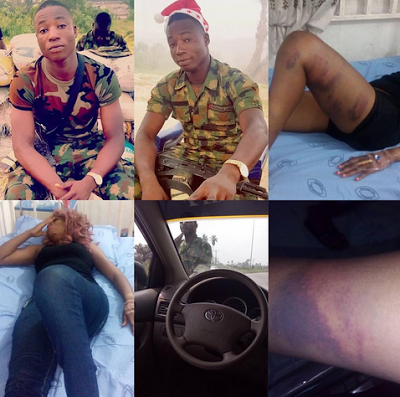 Nollywood actress Jewel Infinity has cried out for help after she was reportedly brutalized, following a beating she received from an army officer in Rivers State. In a post on her page, she said:

Please my good people, I’m sincerely calling out for justice against violence. I am hospitalized right now. I’m in serious pain and agony; in between life and death.I boarded a siena vehicle leaving Port Harcourt for Onitsha. We were pulled over by some soldiers.

One of them, SULAIMAN OLAMILEKAN, began to molest me. He accused me of discussing him, where I was only having a friendly debate with the lady beside me. I explained to him, but he ignored me and demanded I disembark, kneel down and apologise to him.

I told him I did nothing wrong to apologise. He started hitting me with a stick. The other soldiers confiscated and broke my phone, to prevent me from taking pictures. When I told them that I’d no longer proceed with the journey, they refused.

The driver drove off to some distance away from there, and I alighted and returned to Port harcourt and went straight to the Barracks to report him. His superiors pleaded that I shouldn’t take the case any further; that he’d be remanded for one month, which i feel is not enough justice.

He was summoned and he confessed that i didn’t do anything to have warranted his cruel action, that he was in a very bad mood. He begged me to forgive him and not take things seriously. Right now i am bedridden.

The doctor said I’m running temperature due to my high blood pressure. I am in serious pain and rendered partially immoveable. His facebook I.D is Sulaiman Olamilekan.

Please help me reach out to anybody in authority, who can fight this violence. Violence is indeed a cankerworm that has eaten us deep into every fabric of the Nigerian Army Force. Soldiers fight and protect their own, not to destroy the innocent civilians.”