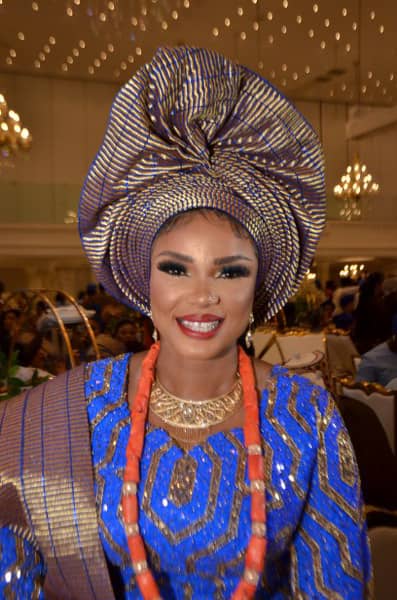 Iyabo Ojo’s Grand Entry
The beautiful and ageless diva stepped into the venue in a black Rolls Royce looking gorgeous in white and gold accessories. she stepped in, in company of one of her brothers.

There was no dull moment with three media personalities.

Many that know Iyabo Ojo knows she is associated with class and luxury and this also showed in her outfits for her party.
She wore 5 different classy and expensive outfits with expensive gold accessories, shoes and bags to compliment her looks.
4 different designers designed all the outfits, the fashion goddess Tiannah , CEO luminee, teekayfashion and tushwardrobe

The ever Stylish Oba Elegushi and his beautiful wife Queen Sekinat Elegushi were among the VIP’s that made it to the Star Studded event. The were both looking gorgeous together as ever.

it was a star studded event alot of notable guests were present at the event. female veteran movie stars such as madam saje fali werepe, iya .
ereko, yetunde wunmi and Ayo mogaji were all present at the well attended party.

Kate Henshaw also made it.

Screen diva Kate Henshaw also made it to the event. she was looking ageless and gorgeous in pink. immediately she stepped into the hall, lots of her fans rushed to her to take pictures with her.

The highly Celebrated Comedian and Film maker Ayo Makun was also present at the party.

it was a blue and gold affair.
many knows iyabo ojo is associated with class and this is always evident in all she does..2 major asoebi was on display, the general asoebi and the second for her close friend which is the aso ijo.These two asoebi made everywhere beautiful and colorful.

Ola Oriki ushered Iyabo Ojo and siblings to their seats.

The delectable Actress , her siblings and grand children were ushered to their seat with special oriki from ijebu by ola oriki and her close friends accompanied the family to their seats. she was looking beautiful in white, while the guys were in blue outfits.

The veteran Actress was not at the party as a movie star supporting one of her own but she was also among the selected committee members. she was on her feet althrough taking charge of everything and making sure guests are well attended.

Tampan fully Represented
Ordinarily, many will think Tampan won’t honor the delectable actress considering the baba ijesha issue that caused rifts few months ago. The fact remains that Iyabo Ojo is a very lovable person that maintains a very cordial relationship with people and always there for her colleagues. Besides that iyabo ojo trained under odunfa caucus and has very cordial relationship with lots of them that has lasted for decades, this explains why they turned up in large number to support Iyabo Ojo. They were led by Prince Jide Kosoko, Lanre Hassan, Abbey Lanre and Yinka Quadri

Toyin Abraham and hubby’s Special Souvenir at the party.

The multiple Award winning Actress and hubby shared bags of fresh tomotoes, chili pepper and onions to guests to take home. it was well packed in 15kg bag and well handled by justadetoun

Anita Joseph and her dotting husband.
This couple were among the many side attractions at the party. Her husband was all over her like a new born while guests admire their love.

They were among the couples that made it to the event and contributed to the success of the event. though Toyin was on her feet through out working as part of the organizing committee.

Ashabi Olorisha flew in from America

Popular yoruba veteran Actress Ashabi Olorisha who is based in the u.s flew in from America to be part of the celebration and also support iyabo ojo.

Odunlade Adekola stole show
It is no more news that Award winning Actor Odunlade Adekola always steal shows at every events he steps into, this was not different in anyway. immediately he stepped into the hall,all attention was on him and trust odunlade to go around and greet guests. He was looking good in his white outfit