Home Sports Down But Not Out: Germany Beat England 1-0 But Leaves Better Hope For Three Lions – Gareth Southgate
Sports

Down But Not Out: Germany Beat England 1-0 But Leaves Better Hope For Three Lions – Gareth Southgate 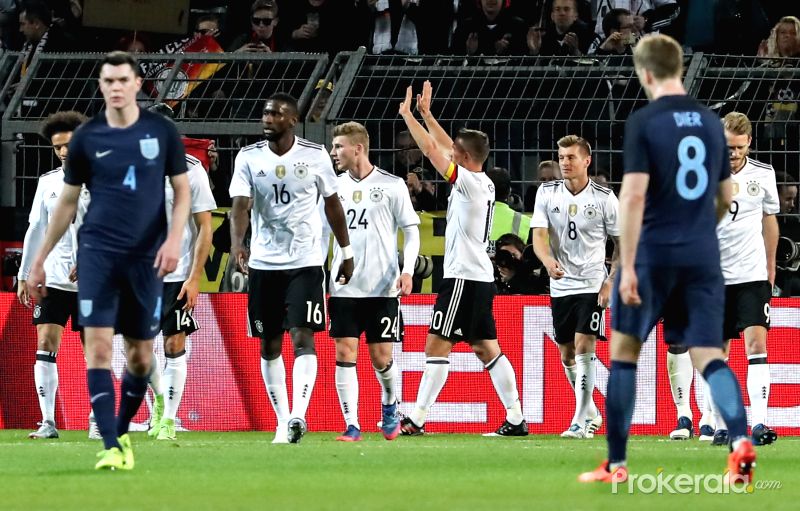 Gareth Southgate’s first game as permanent England manager, following a four-game spell in interim charge, ended in defeat – but it was a loss with honour in Germany.

The 46-year-old is charged with shaping the new era that was meant to be Sam Allardyce’s province, but which ended after one World Cup qualifying win in Slovakia when the now Crystal Palace manager was caught in a newspaper sting.

Southgate ended his run in temporary charge undefeated, but this was the start of the serious business as he prepares his plans to take England to the World Cup in Russia next year.

So what can be taken from the 1-0 loss in Dortmund’s magnificent Signal Iduna Park before Sunday’s World Cup qualifier against Lithuania at Wembley?

Southgate has cut an impressive figure in his early days as England manager, and certainly here in Germany. He was calm and measured throughout, firm in what he demanded in his pre-match media briefing in Essen and cautiously optimistic post-match in Dortmund.

His insistence England must “get off the island” in a football context struck a chord, and it is clear he wants to embrace tactical flexibility and the factors that have made so-called rivals so much more successful.

He experimented with a three-man defensive system England last used in defeat by Croatia in October 2006, a 2-0 loss that exposed the first cracks in the Steve McClaren regime.

Southgate chanced his arm in circumstances that suited experimentation – this was effectively a testimonial for Germany striker Lukas Podolski, who scored the winner on a night when he was lavishly feted before, during and after (seemingly endlessly) by the home fans.

And, while placing it in this context, it worked well enough and integrated the excellent Michael Keane to such an extent it certainly gave Southgate food for thought.

To add extra lustre to this new era of open, non-island thought from Southgate and the Football Association, it was announced before kick-off that a memorandum of understanding has been signed with the DFB, German football’s governing body, to share ideas about coaching, youth development and administration.

It was signed by FA chairman Greg Clarke and chief executive Martin Glenn in Dortmund and will run for two years, with DFB president Reinhard Grindel saying: “Both parties have a tremendous amount of expertise and it only makes sense to connect and share this knowledge.”

What is does mean is the FA and Southgate flew out of Germany with tangible evidence of the determination to embrace a wider culture and a performance that at least illustrated the new manager’s willingness to carry it through.

Down But Not Out: Germany Beat England 1-0 But Leaves Better Hope For Three Lions – Gareth Southgate was last modified: March 23rd, 2017 by Damilare Salami