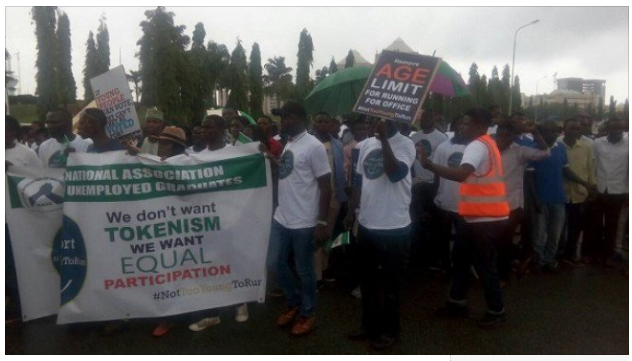 A combination of youth groups on Tuesday stormed the national assembly to demand the passage of ‘not too young to run’ bill.
The bill, a constitutional amendment, seeks to alter sections 65, 106, 131 and 177 of the 1999 Constitution.
It seeks to reduce the age qualification for those aspiring to the office of president from 40 to 30 years, the office of governor from 35 to 30 years, Senate from 35 to 30 years and the federal and state houses of assemblies from 30 to 25 years.
Addressing the protesters at the unity fountain, before they marched to the national assembly, Chidi Odinkalu, former chairman human rights commission, said the future of the country is in the hands of the youth.
He said the country could not afford to lose such legislation.
“We are in a country with a median age of 19 but people who want to save Nigeria’s unity have an average age of over 60,” Odinkalu said.
“Who are they saving the country for? People are being invited across the country as leaders of thought, who are they thinking for? At our age, the average age of the Nigerian youth given our life expectancy, we are already in the middle age and life expectancy for women is 51 and falling, for men, it’s 49 and falling.
“So if you are in your 20s, you are in your middle age people like me are already in injury time and people like us should be seeking to replace ourselves with the kind of people who are leading the not too young run movement.
“Because we are going to die and life expectancy is short, we must replace ourselves with better people, when I look at young Nigerians I’m reassured that this country has a future. That is one promising thing about us. So today let us go and take the national assembly asunder if we must.
“We need to create inconvenience, if we don’t create inconvenience, nobody knows you are demonstrating. Let us cause some inconvenience, let Nigerians know young people matter. For the sake of this country, we need young people in office, we need young people in power, we need young people taking control.”
Also speaking, Ayodele Obe, speaker Nigeria youth parliament, said the passage of this bill would salvage “this generation from what is is now”.
“We can tell you that from our own part, Nigerian youth parliament, we stand with this movement and by the grace of God we shall win,” he said.