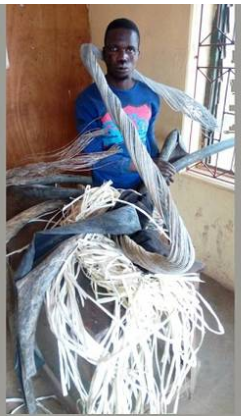 The Suspect was arrested at Omo West area, Ita-Osa in Ile-Ife for allegedly vandalizing and stealing cables belonging to the Ibadan Electricity Distribution Company.

The Public Relation Officer of the NSCDC in the state, Babawale Afolabi said the suspect was arrested in possession of the cables and his tools of operation which includes a saw blade that he used in vandalising the cables.

He said the suspect was arrested with the combined efforts of NSCDC men and members of the community who sighted him while vandalising the cables.

The NSCDC prosecutor, Bolakale Sambo told the court that the offence committed by the accused person contravened the law and punishable.
Sogo pleaded not guilty.

The judge ordered Sogo be remanded t Ile-Ife Prison and adjourned the case to September, 3rd 2018.

READ ALSO: “I WILL REMAIN IN THE APC FOR THE REST OF MY POLITICAL CAREER” – ADAMAWA GOV, BINDOW

“I will remain in the APC for the rest of my political career” – Adamawa Gov, Bindow