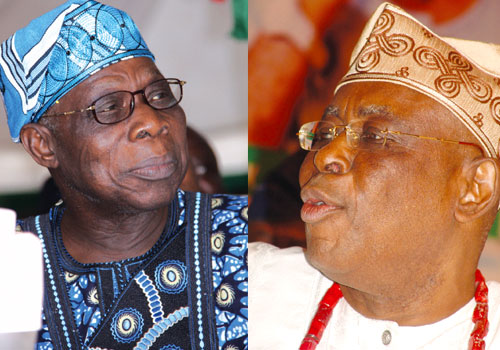 How many people know that ex-President Olusegun Obasanjo and Aremo Olusegun Osoba have ended their 14 year old political rift which made both of them not to talk to themselves for about 5 years until they became friends again recently.  It took Obeys 75th birthday to show this. All though the Church and reception OBJ and Aremo Osoba held on to each other.

Before 2003 OBJ and Aremo were the best of friends. All through the time Aremo was governor of Ogun the 2nd time, they were close.  Perhaps it is because both men have a lot in common. They are both Olusegun. They are very tough. They both have a robust sense of humour. They are both Egbamen, from Egba Central Senatorial district. They are both Octogenarians. OBJ just turned 80 but Osoba turned 80 about 5 years ago.

What caused their rift? City People can tell you why. It was the alleged role of Obasanjo in the victory of the PDP across the South West. That was the election that sent Osoba and other AD governors packing. OBJ was accused of being the man that masterminded the victory of the PDP which saw Osoba losing out. Till tomorrow Osoba and his group insist that the PDP rigged him out of office with the active connivance of Obasanjo who was then President.

The believe was that Ogun State being the home State of OBJ was not going to be left to the AD. Equally painful was how OBJ was said to have invited Osoba for lunch at his Otta farm, whilst election was going on and it was on TV that Osoba got  to hear the news that he had lost. Osoba was so very bitter at the way the election went and for years after that Osoba and OBJ were not on talking terms.

Now, they have put all that behind them, OBJ and Aremo Osoba are friends  again.