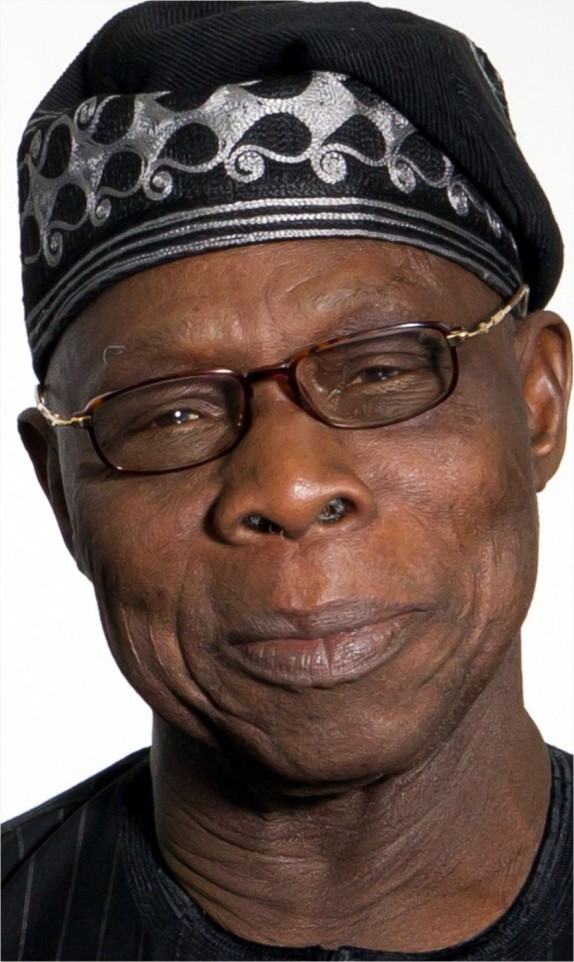 The 36th edition took place on Sunday, 12th December 2021 at the Gbagada Church, amidst pomp & pageantry. The church which the Primate left behind was filled to the brim and there was an overflow. His very good friend, Chief Olusegun Obasanjo, the former President of Nigeria was at the service. He came in very early and was on the front row by the 12 noon take-off time.

Below, City People gives you a blow by blow account of the special service.

THE CHURCH WEARS A NEW LOOK

Since the exit of Primate Omolaja Olorunwo, the Spiritual Father of the church, it has been wearing a new look, the church leaders and the family have done a lot to retain the beauty and the neatness that the church was known for. Baba was buried at the left side of the entrance of the church. His exalted seat still remains empty. No one sits on it. A large photo of him was placed on the sit. All around the church, life-size banners of him have been placed with the inscription, Baba lives on.

OBASANJO’S OTHER SIDE REVEALED!

Many people don’t know that former President, OBJ is deeply religious. He is. We can tell you. He stormed the event in an all-white Cassock and came with his big black Bible. He followed the programme closely and he danced to all the carol songs sung at the service. He also played Sekere along with the song. He came with Otunba Justus Fasawe, his age-long friend.

Her Excellency, Chief (Dr.) Mrs. Olufunso Amosun, the beautiful wife of the former Ogun Governor, Senator Ibikunle Amosun has never missed the Christmas Carol service of the Olorunwo Cathedral Church. She has always attended the Carol year in, year out. She came in looking adorable in a green lacy dress, with matching shoes and a bag. She is very stylish. She wore a lovely ring.

She was one of the Lesson Readers. She read the 9th Lesson. The Moremi of Yorubaland (Iya Ajiri) also represented her husband was to be the Special Guest of Honour, Senator Ibikunle Amosun (FCA) CON, the former Governor, Ogun State.

Primate Olorunwo’s widow, Snr. Rev. Apostolic Mother Prophetess. K.B. Olorunwo can’t stop missing her husband. It was her birthday on Monday, 13th December 2021 and the church decided to call her out for prayers. Last year, her birthday fell on the same day with the Carol Service.

BRIEF OF THE CHURCH

He grew in spiritual power and was directed by the Holy Spirit to establish a C&S Church (Aladura) which he did on the 26th November, 1966 at 30, Hugges Avenue, Alagomeji, Yaba in one big sitting room. The Church was named Oke-Igbala C&S Church. he was also directed by the Holy Spirit to stop working with Shell Company, Shell Installation Apapa which he did in 1968 as an Architect.

Therefore, he became a Full-Time Prophet of God though he had lots of tribulations as the first church he erected was pulled down after two years of existence. He was later to find the church on ground after he returned from a seven-day prayer from Olorunkole Mountain in Ibadan. he was undaunted and later moved to another site at 146, Clifford Street, Alagomeji, Yaba in 1968. After this feat, he was ordained an Apostle in 1970, he became a Senior Apostle in 1975, a Most Senior Apostle in 1976 and ultimately a Special Apostle in 1979.

The church eventually had to vacate the new site at Clifford Street for a swampy area at Abule-Ijesha, Basua Estate, Off Fola-Agoro Road.

During this time, the church lost many members due to the incessant relocation of the church from one location to another. However, there are a few steadfast and loyal members who remained with the church through thick and thin till date.

The name of the church was later changed to Olorunwo Cathedral Church of C&S (Inc) in 1970 after a Church General Meeting with late Gen. Kehinde Sho-Silver. Eventually, the present abode was developed while church activities were held at Fola Agoro, Abule Ijesha, throughout the period of construction. Since then, the church has witnessed an era of stability and progress till it come to the “Promised Land”. The present church was completed through the Grace of God and was dedicated to the Glory of God on the 26th November, 1983. The occasion was chaired by Late Bashorun M.K.O Abiola with late Dele Giwa.

The church has grown with branches. On the same day, the founder was enthroned and ordained as Archbishop, Primate, Spiritual Father and Head of the church by the C&S Council at a Most Solemn Ceremony which was presided over by Most Geng. Superintendent C.O S Benson on behalf of the United C & S Council.

This year, the church picked on 9 Lesson Readers many of them are new faces on the scene. The 1st Lesson was taken by Prophetess Omotinuolawa Olorunwo (one of the daughters of Primate Olorunwo. The 2nd Lesson was read by Dr. (Mrs.) Adebukola Oni. The 3rd Lesson was by Prince (SP) Olumuyiwa Adejobi, Assistant Force PRO, Office of the Inspector General of Police, Force Headquarters Abuja. The 4th Lesson was by Honourable Kayode Akinolu, member, Federal House of Reps, Lagos Island Constituency (II). The 5th Lesson was by Godfrey Orkeh and the 6th was by Dr. Seye Kehinde, Publisher, City People Magazine. The 7th Lesson was by Chief Architect Tokunbo Omisore, former President, Africa Union of Architects. The 8th Lesson was by Prof. Eddy Omolehinwa, Professor of Accounting, UNILAG. The 9th Lesson was by Mrs. Amosun.

All hands were on deck to make this year’s Carol a huge success. All Primate Olorunwo’s children were up and doing. Venerable Barrister O.J. Olorunwo conducted the service. He was the officiating Minister. He did a good job. Aunty Agba played a supervisory role. She supervised the food served. Lunch was served. She is the eldest. Special Mother-In-Israel, Mrs. Yewande Otusanya is in charge of Welfare. Senior Pastor E.I.O Olorunwo, M/SP Pastor, Lagos District Pastor/General Evangelist was also involved in the service.

One of those close to Baba Olorunwo in his lifetime was Oba Adedotun Gbadebo (CFR), the Alake & Paramount Ruler of Egbaland. In his letter of commiseration last September, he described Olorunwo as a Vicegerent who had paid his dues and flaw away triumphantly to the paradise”.

The Alake wrote that “we have known him all our life and attended many of his annual Carol of the 9 lessons especially from 2005, when it pleased the Lord to put us as the apex of the Egba Traditional leadership, the last of which was the 35th Edition of the exercise last year. We are pleased to disclose that his wife is my mother in Israel and his children are my aburos.

MANY CELEBRITIES RALLIED AROUND FAMILY

The Carol Service was well attended by a lot of Papa’s friends. One of them is Papa Olaniyan, who is still very strong. He still reads with no glasses. He was Papa’s best friend in his lifetime.