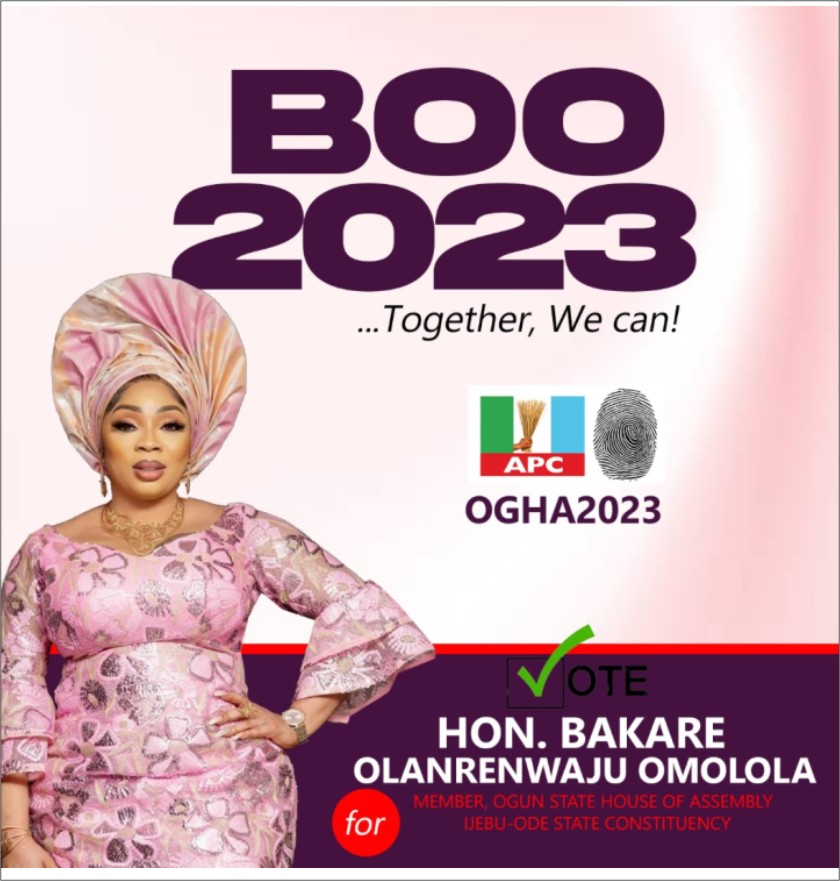 In Ijebu-Ode, Ogun State right now, there is a beautiful female politician who is currently making waves. She recently won the Ogun APC ticket for Ijebu-Ode State Constituency, at the Ogun State House of Assembly. Though she has been in Politics for quite a while, many didn’t believe she could get the Assembly ticket. They had underrated the influence and grassroot support she commands. For very many years she had been a legislative aide to a House of Reps lawmaker and she had learnt a lot about politics. At the last APC primaries in Ogun State, only very few people gave Hon. Bakare Olanrewaju Omolola a chance of victory.

Many things counted against her. One is being a woman who is in a man’s world, Politics. Two, she lives and works in London, though she frequents Nigeria a lot. Three, she was not supported by the APC political godfathers in the state, and she wanted to get the APC ticket for the Ogun State House of Assembly for the Ijebu Ode State Constituency. And it was a seat that was keenly contested. She went through a lot, City People gathered. At every stage of the way, the powers that be tried to block her and play her out. Citypeople gathered that at a point she was even asked to step down and was promised to be adequately compensated. Each time she was close to scoring, the powerful players in the game kept shifting the goal post to ensure she does not emerge, explained a party member.

When they could not stop her, they accused her of all sorts, like they do to most women, they even intimidated her.

By the time the primaries came she dazed everyone when she beat other aspirants. What made her win was the grassroot support she got from some of the party leaders especially the old women from her constituency who insisted that it was going to be Lola or nobody. She was shocked when 2 days to the primaries the rules of the game suddenly changed and she had to begin all over again. She worked day and night. Her strategy was simple. She worked on leaders who convinced their delegates to vote for her. She did a lot of work to convince the delegates to vote for her. It was a tough battle.

Earlier on in the year, she turned 40  and celebrated it in a big way.

She held a grand party in Lagos to celebrate her landmark age.

It is a party that many of those who attended are still talking about, while those who missed it are regretting that they missed what has been described as the mother of all parties.

It has been adjudged by many to be one of the best parties to have been held this year in Lagos.

For those who don’t know, BOO was coined from her full name Bakre Omolola Olanrewaju. She is an accomplished female politician from Ijebu-Ode Local Government in Ogun State and she won the primaries.

No wonder a lot of politicians from Ogun and Lagos State stormed the party in large numbers.

It was a birthday that took 1 year to plan. Since last year, the celebrant had sent out Save A Date notice to all her friends on social media and she had indicated that it was K1 that will perform at the event. So serious was she that she paid a long time ago to seal the date with the Oluaye of Fuji.

And every month she kept reminding her friends. No wonder why the party turned out hugely successful,as over 600 beautiful ladies stormed the party in stunning outfits. They were dressed to kill in a lot of revealing outfits.

Although she made reservations for 1,000 guests, an extra 500 guests joined. The remarkable thing was that the hall was filled up with quality guests from both Ogun and Lagos State. A lot of political office holders came from both states.

A lot of APC party leaders at both the state and national levels attended. They came to support Omolola. Nollywood babes stormed the party. Lagos and Ogun celebrities were so visible.

The celebrant got top-notch event vendors to handle the event, from drinks to food.

Of course, K1 dazzled everyone with good music.

Ultimately, the celebrant, Omolola stole the show at her own show. She changed twice. And her 2 outfits were stunning. Earlier on in the day, she had a photo shoot where she took stunning shots.

With her party, over and done with, she started work on her political ambition.

She contested for Ogun State Assembly seat and won.

How did she see the success of her 40 birthday party, we asked her, then. “I was so happy with the success and the turnout of the party. It was a little bit stressful at the beginning, but it ended up well.”

“Everything was successful. I thank all those who attended the party. When I arrived at the venue and I saw the whole place filled up with exotic cars and jeeps, I was shocked.”

“Both outside the venue and inside the compound was filled up with cars”.

“When I came into the hall and I saw a lot of people, a lot of my friends and my bosses, I was speechless. I wanted to start crying. I was happy many people came out to support me. Some of my friends even came in from abroad. I am happy. I just thank God for the successful programme.”

“I thank my planner for doing a good job. Because I don’t live in Lagos, it was a little bit challenging planning the party at the beginning. My planner is a young guy, Tokunbo, we sat down to plan it. We picked 2 different Aso-Ebi, I chose the colour. I was the one that chose the Torquoise Blue and spoke to 2 of my friends that do Aso-Ebi. And I told them what I want. They sent samples to me and I chose what I wanted. We picked Atiku for the man. It was nice”.

“I was speechless when I came into the hall. I am happy everything went well”.

What is her background like? Where was she born? Where did she grow up? “I grew up in Ijebu. But I was born in Lagos. My mum moved to Sagamu. She was a midwife.”

She worked in Sagamu General Hospital.”

“I schooled in Ijebu, for my Primary and Secondary School and University. First of all I went to NIJ which is the Nigerian Institute of Journalism to do. My ND in Journalism, then I did HND at the Polytechnic in Ibadan.  I did Economics B.Sc. in LASU. After then I left Nigeria for London. When I got there I studied again. I studied Housing & Social Work at South Bank University. That was where I did my degree in London. So, I work as a social worker”.

What was her experience with COVID like at that time? “It was tough. It was bad. I thought I was going to die during COVID-19. It wasn’t a good experience. I was one of the 1st people that had COVID. There was no way to treat it then. No 100% treatment for it. When I was admitted into the hospital, I was just giving me Vitamin C”.

“On March 22, I was admitted into the hospital. When I came out of the hospital, I was happy. I said wow! For me to survive this, I love what the nurses were doing.”

“Even though people were dying, they kept doing their job. I was impressed. I just felt Nurses must have a brave heart to continue to be Nurses, especially during COVID, when you will see people dying and they kept taking care of patients. So, I said okay, I think I need to change my career.”

“What they are doing, I think I can do it as well. And for them to even save my life during COVID-19. When I went back to work after I was discharged from the hospital, I told them I want to change my career, I want to be a Nurse. In the UK, there are different categories of Nurses: Adult Nurse, Children Nurse and Mental Health Nurse”.

Omolola is also a politician in Nigeria. She is a member of APC. How did it all start? “Yes. I joined APC about 5 to 6 years ago because then, I had a Charity Foundation called Lola Bakare Foundation. It was my foundation that led me into politics.”

Last election, I contested for the House of Assembly, during the Amosun/Dapo Abiodun crisis. I got caught up. They didn’t allow us to do primaries. So they just wrote out names that they are doing Consensus which caused a lot of trouble in Ogun State. Eventually, we that we are in Amosun’s camp, obviously, didn’t emerge.”

“Eventually, nothing came out. When they now offered me an appointment in reality, I told them I don’t want what they are going to give to me, which they said a lot of politicians will take up gladly. I felt like what they wanted to give to me will not sustain me. So I felt like I can’t do it, rather than just getting it and not putting my all into it. It is better not to take it”.

“But presently, I am a legislative aide to a Reps member. I have a federal appointment in Abuja”.

“And I am still going to contest again. I am contesting for the House of Assembly seat, Ijebu-Ode Constituency and we are going to have our primaries in June. Let’s see how it goes. Maybe, by God’s Grace, I will get it”.

Why VP OSINBAJO Finds It Difficult To...

Why I Am Running For LAGOS Central...

If TINUBU Doesn’t Declare, We Will Declare...