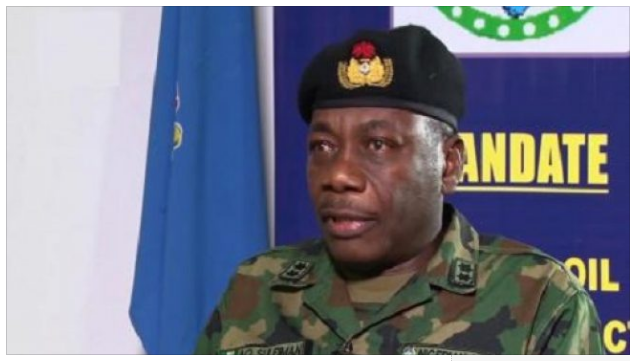 A coalition of Niger Delta militants has called for the sack of Apochi Suleiman, commander of the joint task force (JFT), over his alleged involvement in oil bunkering.

In a statement signed by 13 militant groups on Thursday, the coalition said it had investigated allegations against the current leadership of the JTF and found it culpable.

The group said the activities of the joint task force was adversely affecting the economic growth of the region and the entire country.

It also urged the Economic and Financial Crimes Commission (EFCC) to probe of the activities of the JTF commander.

“After receiving report from our intelligence and surveillance units and all the affiliate groups of the coalition of Niger Delta Agitators across the region and beyond, which we mandated to investigate the activities of the JTF commander in the Niger Delta, the shocking report indicted the JTF and its leadership of complicity and involvement in illegal oil bunkering of great magnitude in the Niger Delta,” the group said.

“After careful deliberation on the report, we call on the president and commander-in-chief of the armed forces to order the immediate removal of the JTF commander, Rear Admiral Apochi Suleiman, from the Niger Delta region.

“We, therefore, call on the Economic and Financial Crimes Commission (EFCC), Independent Corrupt Practices & other related offences Commission (ICPC), office of the national security adviser and military authorities to, as a matter of urgency, remove and probe the activities of JTF commander, Rear Admiral Apochi Suleiman, before it is too late.

“We also use this medium to call on the ministry of defence and military authorities to restructure the joint task force (operation Delta safe) with immediate effect in order to avoid breakdown of law and order because we will not sit down and watch them connive and steal millions of crude oil barrels on a daily basis.”