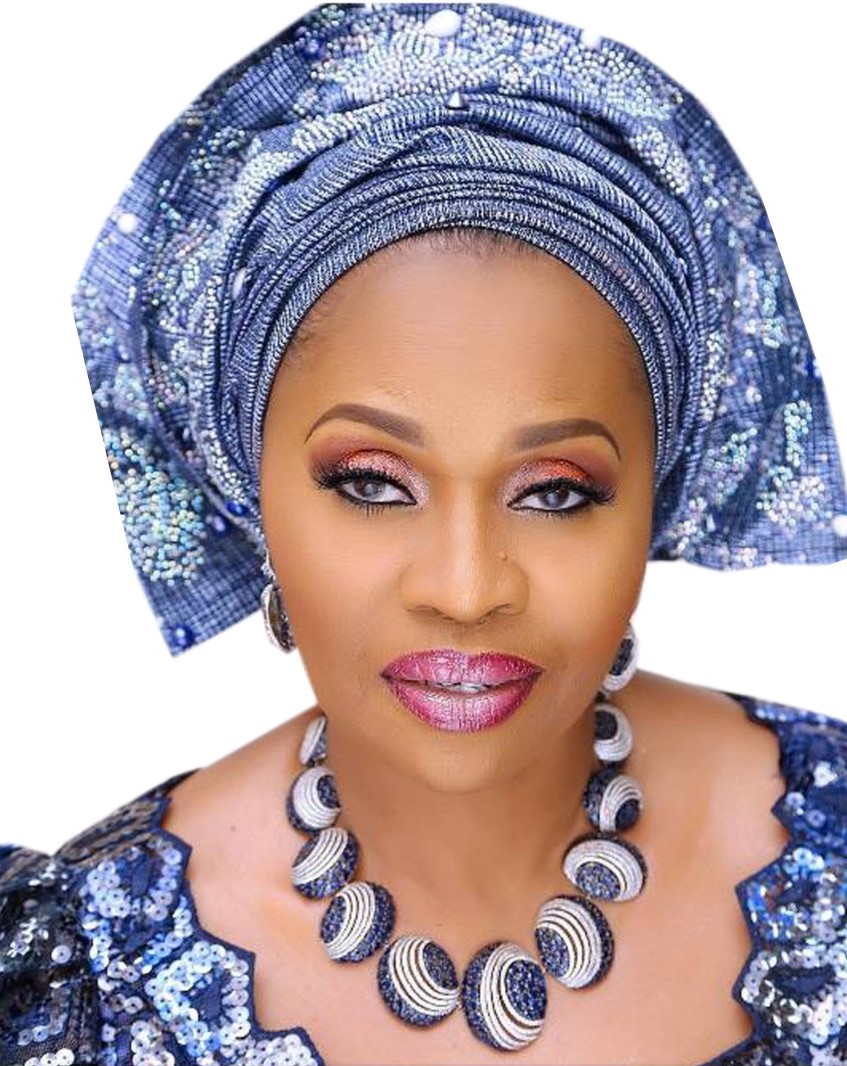 It was indeed a party to remember on Saturday, Oct 12th 2019 when Lagos society woman and Oil magnate, Hajia Bola Shagaya threw a big 60th birthday that shut down the whole of Lagos. It was an event that was attended by many top dignitaries from all corners of the country. CityPeople Society Editor, TAYO FAJORIN OYEDIJI and PHOTOJOURNALIST, FEMI ADELEKE captured the classy dinner party.

For Hajia Bola Shagaya, Life just began at 60. She looks so good for her age and so energetic that she went to all tables to greet all her guests. It was her best day and many dignitaries all came to show her love.

HOW SHE STOLE HER OWN SHOW

To say the celebrant was the best dressed for the day will not be outrageous because she looked very pretty. She has been known to be a very simple yet expensive dresser. She wears what looks good on her and what you cannot take away from her is her love for diamonds. They are her best friends. She must have rocked those precious stones in a rough estimate of over 2million dollars. From her pre-birthday pictures to the Abuja party and Lagos grand finale. She also shopped for most of her outfits and accessories like shoes and bags from designer stores around the world. So when she made her entry into the venue, every eye was on her, she was rocking a beautiful, never seen before outfit from award-winning designer, Deola Sagoe and her makeup was done by the queen of makeup, Banke Meshida.

APC NATIONAL LEADER, TINUBU STEPPED OUT WITH SON AND DAUGHTER IN LAW

Jagaban Borgu, Asiwaju Ahmed Tinubu, APC National Leader was the party. He also made a loud entry as he made his way to the VVIP table where the celebrant was sitting. He was at the party with his son, Seyi who is fast becoming a force to reckon with alongside Seyi’s wife, Layal Tinubu who just got back from vacation.

WHEN ALIKO DANGOTE WAS WITHOUT HIS CLOSE FRIEND

The richest man in Africa, Aliko Dangote was also at the party. He was sighted without his close friend, Femi Otedola. He was ushered into the venue by the celebrant herself, Hajia Bola Shagaya. He was with one of his billionaires’ friend, Sam Iwuajoku and Governor of Ekiti state, Kayode Fayemi

2 first-class monarchs, Ooni of Ife, Oba Ogunwusi Adeyeye and his bosom friend who is also a first-class Oba, Saheed Elegushi were both at the party where they added their royal touch. Oba Saheed Elegushi was with his beautiful wife, Olori Sekinat Elegushi who looked pretty in an all-black dress by award-winning designer, Lanre Da Silva Ajayi.

It was more or less the first of its kind in Eko Hotel as the convention centre wore a new look entirely. The decoration was out of this world. From the beginning of the walkway till the end, Hajia Bola Shagaya pictures littered the whole space and it was a lightening décor all through which gave many guests different places to take their pictures. Popular event decorator, Yewande Onabiyi was on top of her game.

2 EX-OGUN GOVS AND FORMER EKITI GOV WERE THERE

Ex-Ogun Govs, Aremo Segun Osoba and Sen. Ibikunle Amosun were also at the party. Former Ekiti Governor and minister of Industry, trade and investment, Niyi Adebayo was also there. They were there with their pretty wives, Olufunso Amosun, Derin Osoba and Angela Adebayo at the birthday dinner. Senator Ibikunle Amosun sat with Aliko Dangote. The wives all looked pretty in their outfit.

One of the billionaires that never makes noise is Tunde Folawiyo, the heir apparent to the Folawiyo dynasty. He does not always attend parties, but when he does, it must be A.list. Immediately he made his way into the venue, he went straight to greet Emir of Ilorin, Alhaji Sulu Gambari and was on his knees all through.

FMR PRESIDENT, BABANGIDA WAS REPRESENTED BY HIS SON, MOHAMMED

Nigeria’s former president, Ibrahim Babangida also honoured Hajia Bola Shagaya by sending his son, Mohammed to represent him. Mohammed was at the event with his wife, Umar. He also shares a great friendship with Bola Shagaya’s children. He was seen with them on stage singing the happy birthday song for Hajia Bola Shagaya and also took group pictures with them.

KWARA, OGUN, EKITI GOVS WERE THERE

The trio of Kwara, Ekiti and Ogun governors, Abdulrahman Abdulrasaq, Kayode Fayemi and Dapo Abiodun were at the birthday dinner. They came in with their pretty wives, their first ladies. Sighted were Kwara first lady, Olufolake Abdulrasaq, Bamidele Abiodun but Bisi Fayemi was conspicuously absent.

A TALE OF 2 POWERFUL NORTHERN EMIRS

In the northern caliphate, Emirs are highly revered. At Hajia Bola Shagaya’s party were 2 influential emirs, Emir of Kano, Lamido Sanusi and Emir of Ilorin, Alhaji Sulu Gambari. They made the event grand by witnessing the 60th birthday dinner. They both came with all their entourages and Emir Of Kano’s daughter, Sadika was there with her father.

It’s been a while Billionaires daughter, Bella Adenuga stepped out at Lagos parties but she was at Hajia Bola Shagaya’s birthday as friends to her children. She was spotted alongside her husband, Jamil Disu.

Hajia Bola Shagaya can’t be having a party and society women will not be there in large numbers. The hall was filled with a lot of society women who have had one contact or the other with the celebrant. It was indeed a payback time for her. Sighted were Sisi Abba Folawiyo, Ireti Asemota, Erelu Abiola Dosunmu, Chief Mrs Oprah Benson, Olori Ladun Sijuade, Mrs Bisi Abiola, Alhaja Kubrat Okoya and many others.

WHEN THE WHOLE NORTH WAS BROUGHT TO LAGOS

It was as if Hajia Bola Shagaya is a core northerner because northern Nigeria was well represented at the event especially northern big shots from Abuja, Kano, Kaduna and Ilorin. It was a huge calibre of northern men and women who all came to celebrate her diamond milestone.

Popularly called mother of all generations, Prophetess Esther Ajayi was at the party. She was ushered in by Ovation publisher, Chief Dele Momodu. She was looking regal in her usual diamond stoned Sutanna dresses that she wears. She sat on the same table with Senator Daisy Danjuma.

One of the highly revered Islamic Cleric in Nigeria, Sheik Farouq Onikijipa was at the event. He is well-loved by the Muslims and most powerful celebrities always want to have him at their events. He led the opening prayer at the party.

The former president of the 8th Assembly, Senator Bukola Saraki supported his sister who is also from Kwara State. They have been friends from time immemorial. His pretty wife, Toyin Saraki complemented her husband. She wore a monochrome dress which seated well on her.

Mama Bakassi, Senator Florence Ita Giwa dazzled at the party. She wouldn’t have missed her friend’s birthday for anything. She was seen on the same table with her.

Queen of blings, Senator Daisy Danjuma was also one of the celebrity women who lightened up Hajia Bola Shagaya’s birthday. She took up some major roles at the birthday and only someone who shares a close friendship together can go that extra length. She was seen wearing an ivory coloured dress.

Lotto high chief, Chief Kesington Adebutu was also at the party. He was there this time around not with his wife but with his daughter, Tope Adebutu.

Eleganza boss, Chief Rasaq Okoya was at the birthday with his pretty wife, Shade Okoya. They both looked good together wearing white outfits.