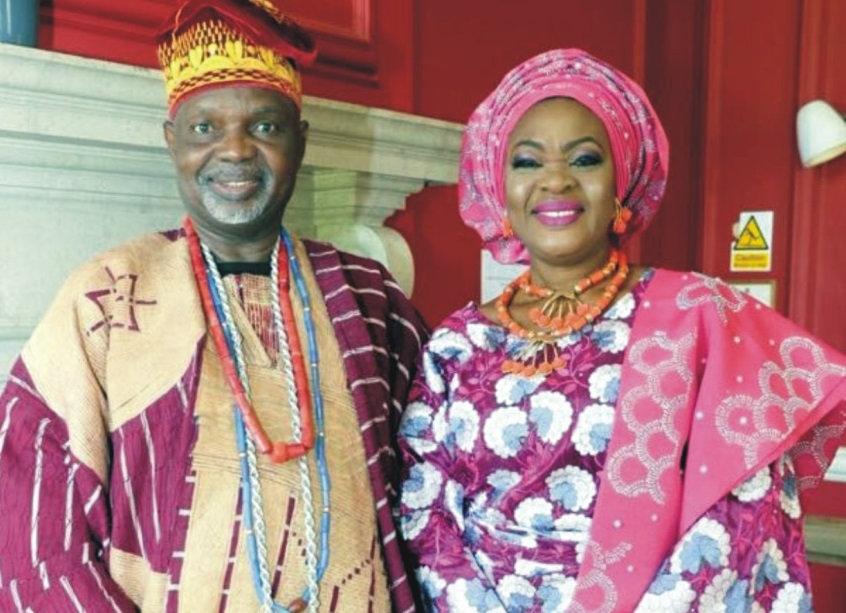 Come 12th August 2018, at the same Church, Saint John’s Wood Anglican Church, Hampstead, London NW8, Great Britain where they got married in 1978, Oloye and Chief (Mrs.) Lekan Alabi will be reigniting the flame of love in their marriage, as they celebrate 40 years anniversary in style. After thanksgiving at the above mentioned Church in London,  the couple will proceed on a honeymoon in Madrid, Spain. Before they come back home for the Nigeria phase of the celebration, where there would be Appreciation Reception on Saturday, 27th October,2018, at Lalupon area of Ibadan.

Oloye Lekan Alabi, the Agbaakin Olubadan of Ibadan land and his beautiful wife are well loved and highly respected celebrity couple in Ibadan. Theirs, according to Lekan Alabi, is a marriage made in heaven due to the circumstances that led to their meeting and eventual marriage. And till today, 40 years in marriage, the love between both of them is still as strong as when they first met in London in 1977. They have grown to becoming a shining example for both the older and younger couples. While Oloye Lekan Alabi is an outgoing person, his lovely wife Chief (Mrs.) Adetokunbo Mojirade Alabi (Née Laditan) is reserved and resourceful.

Together, they have built a strong, loving family and they are blessed with four children (two boys and two girls). Their children are doing well, the last born of the family is above 30. Why won’t they celebrate? In this interview with City People’s Correspondent, Dare Adeniran, Oloye Lekan Alabi speaks extensively on what has kept his marriage up till now. How it was predicted that he was going to meet and marry his wife in London. He also speaks on life as a family man and his decent upbringing and many other interesting issues. Read on.

By August 12 this year you and your wife will be celebrating the 40th anniversary of your wedding, how would you describe your love life?

“Let me, with all sincerity, say that we belong to the lucky group that they say their marriages were made in heaven.” When I was young it was predicted, in fact I predicted that I was going to get marry to a White lady. “But later when I was growing up, the people whose job is to predict said, I will get married abroad, in England precisely and the circumstances under which I will meet my wife.” And it came to pass, exactly as it was predicted. Ditto for her too, particularly her paternal grandmother; she too predicted exactly the way it hapened. So you can say we have been on autopilot.

What year was that and how did it happen?

I was living at 82, Prince George Road, Stoke Newton, London N16 of the College of journalism Fleet street. She too was a student of Pitman College because she did Secretariat Studies in London in 1977. Her school mate who is now late (may her soul rest in peace) former Miss. Tutu Olanipekun. She was leaving the college and going back to Nigeria. Tutu with few of her friends, we were tenants in the same building.  So the lady who would later become my wife came to visit Tutu but she wasn’t at home.

The celebrant said we should ignore the visitor because he didn’t want any gatecrasher because any tenant should have key to the door. But when the caller persisted I now said, that person must have a mission, for keeping on ringing I am going to attend to the door. He said if it turned  out to be a gatecrasher he wouldn’t like it. But I reminded him of the fact that am also a tenant in the house so we have equal rights. Lo and behold I opened the door and i saw this pretty lady, that is how we met.

She was asking for her friend but I told her that they had travelled out and that we are holding a birthday party i am the. M.C, would you want to come in? She declined, she said no, she was not coming in. We picked it up from there and the rest has become history. So our love life has been like any other normal couple. But let me tell you what I said at our wedding reception on August 12th 1978, I said I thank God with my wife that our relationship has led to the altar. Not because we were angels, whereas some other relationship also terminated halfway without getting to the altar. It is not that they are devils. So it is a matter of loving your partner or accepting his or her faults and weaknesses. Only God is perfect.

Apart from these things you have stated as the pillar of a successful relationship, what other things would you say has bee sustaining your marriage in the past years?

I think it is the prediction of God, as I said, “made in heaven”. Because we are human beings and again I am recalling that my statement at our wedding reception that, “couples whose marriages did not even last a year not to talk of three, five, ten years, it is not that they are devils and couples who celebrated 20, 30, 40 years wedding anniversaries, it is not that they are angels. But between them there is what they call love, tolerance and forgiveness. That is the simple secret apart from God.

While it is natural for any man to love his family, you seem to have this great bond with your family; you can be referred to as a core family man. What explains this?

Thank you very much. It is because i grew up in the typical Ibadan family, compound setting, Ile Ekerin Ajengbe, SW1/131. Where it was not only your parents who will take care of you or discipline you; in the good Yoruba cultural system where anybody of your parents’ age was also your parents. Anybody who is older than you was your brother or sister. In such environment, we were made to realise that you must live for the other person, that there is strength in unity and we never lacked and I am not being immodest from my antecedents.

Because our own father who I called my father until he died, Late Papa Abraham Adejumo Laditan, the late Seriki of Ilaro and Baba Ijo Anglican Church Ilaro, former Registrar Cooperative Societies Western Region. They too they had privileged, fun-filled life. I think it is the background that will affect the child, children should be shown love, but at the same time they must be diciplined, without been into excesses. That is how I was brought up, particularly my paternal grandmother, my mum is alive hale and healthy, 93 years old. It was when I entered primary 1 in 1958 that I realised that my paternal grandmother was not my biological mother I thought she was the one.

So one was showered with love; the pure “omo ola” background whereby you are brought up never to beg or lack.

It one thing to get married and another thing to be in marriage with your best friends share with us soe of the things you and your wife have in common?

Again, I will always refer to that divine connection from heaven. But I a what you can call the outgoing person (extrovert) , she is reserved (introvert). We thank God for the blessings whereby God gave me and still gives me and I pray He should continue to give me, all that is required to help my faily, provide the necesity and give our children the best. Not only in care and love, even in education.

How would you describe your wife, what a kind of person is she?

She belongs to the class they cal  the ‘Old School’ from her background, who are taught to know that the husband is the head. But I think her parents, the relations and those who know her very well will tell you that she is an extremist when it cones to orderliness, neatness.

I think it is bothered on excess, extremely finicky. She can’t stand a single dirt in any form. She wants her home to be 100% neat, particularly her flowers; everything must  be in place and that takes her time and it helps. And remember, the little of my job as a former Press Secretary, Corporate Affairs Manager took me out, until I retired, to places within and outside Nigeria. She was home, very comfortable  with the children, giving them the basic background, supports, love and discipline.

If you ask the, I don’t know whether we can call them children now because our last born is 31 years old. But if you ask them they will say she is the extreme disciplinarian, I am just the easy going type, even though I didn’t allow them cross the border of excesses and normalcy.

Oloye Lekan Alabi that we all know is a professional, a fashionista and it is normal for women to flock around people of these qualities, how Ave you been able to manage this particularly during your active years in the public and corporate services?

My father had eight wives, may the Lord bless his soul. My mum was the first wife. My uncle his younger brother had six. But later in life they were telling me it was not ideal to have maybe more than one wife or maximum two. So that causion rings in my ears till tomorrow. Then number 2, as you said (thank you very much for your description) one must not let or get carried away by either position, influence of whatever. I think that helped me too because many people wi not beleive that I have just only one wife in the last forty years, not many. And the other line to it that, there is no lovechild outside our marriage, none.

“Citizens Are Fast Losing Confidence In Our Security System” – Dogara