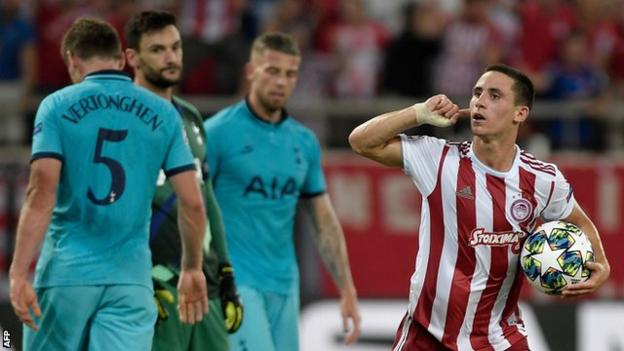 Tottenham threw away a two-goal lead as they were forced to settle for a point in their Champions League Group B opener against Olympiakos in Greece.

That lifted the passionate home crowd and Olympiakos equalised from the game’s second penalty, former France forward Mathieu Valbuena beating Hugo Lloris, the current Les Bleus captain, from the spot after Valbuena had been fouled by Jan Vertonghen.

Tottenham’s result means both of last season’s Champions League finalists have failed to win their opening group games, after holders Liverpool were beaten 2-0 by Napoli in Italy on Tuesday.

In Group B’s other game on Wednesday, Bayern Munich beat Red Star Belgrade 3-0 in Germany thanks to goals by Kingsley Coman, Robert Lewandowski and Thomas Muller.

Pochettino’s side showed Herculean spirit to go all the way to the final last season yet were far from their best as they made a shaky return to the competition in the port city of Piraeus.

Having allowed a 2-0 lead to slip against Arsenal in the Premier League on 1 September – again after conceding late at the end of the first half – this is the second time in three games they been left to reflect on what might have been.

With five-time winners Bayern and the unpredictable Red Star, who beat Liverpool last season, also in the group, Pochettino will hope this result does not come back to haunt his side.

Kane won the penalty which led to him breaking the deadlock, the Spurs striker clearly tripped by Tunisia defender Yassine Meriah. Then Moura produced an emphatic finish after Ben Davies marked his return by winning back possession and laying on the pass for the Brazil winger to score an outstanding goal.

On a night of missed opportunities, Kane could have had a hat-trick.

Yet, on two separate occasions, Dele Alli – making his first start of the season – and substitute Erik Lamela decided to go for glory instead of choosing the easier option of squaring to Kane to score.

P&ID $9b Debt Saga: 2 Staff Plead Guilty Of Fraud In Court, Company Has No Licence – EFCC