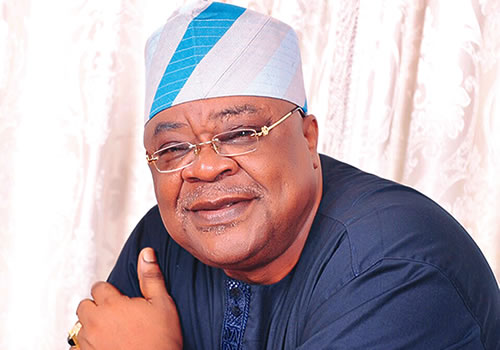 The news of the death of Otunba Alao Akala is still a huge shock to the indigenes of Oyo State and the country at large. He is said to have died this morning at his Ogbomoso home. Otunba Alao Akala, who was a former governor, was an outgoing and jovial personality everyone loved.
Last Christmas December 25th 2021, will still be a fresh memory to everyone who attended the late former governor’s Xmas party. It was a Christmas tradition for Otunba Alao Akala to hold a big celebration every Xmas at his house located at Randa behind Bowen teaching hospital, Ogbomosho, Oyo State. This was a party everyone talked about and always looked forward to because everyone had a chance to spend this day with the mighty Otunba Alao Akala.
It was a big event that people would come dressed in the same aso ebi and gele. It was a perfect opportunity for Otunba Alao Akala to bond with the people he loved.
It was no different last Xmas when Otunba Alao Akala stepped out alongside his two bodyguards. He was dressed in a purple senator material with matching cap. With joy in his heart he sang the Ogbomosho anthem standing strongly on his feet and beaming with a warm smile. He was his ever happy and jovial self, throwing loud laugher in the air. There was nothing that suggested that he would not be around for so long. It is a hurtful feeling to wake up to the news of his demise.
Rest on Otunba Alao Akala. The good people of Ogbomoso and Oyo state as a whole will surely miss him.
—–Damilola Akande

Five Spectacular Things About the MTN Season of Surprises