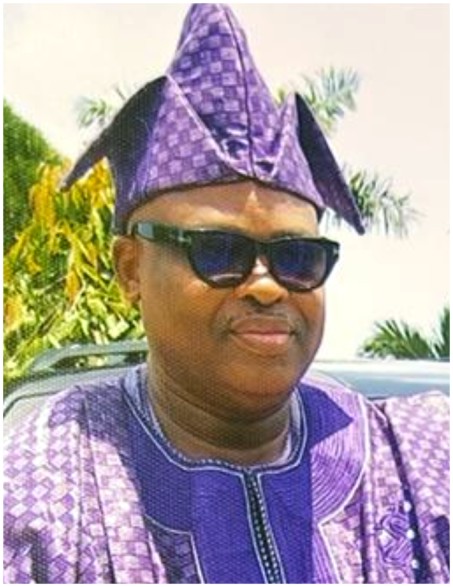 It was a case of mixed emotions on Friday, May 16, 2021 at the Ebony Vaults and Gardens, Ikoyi. It was an event that displayed wealth and affluence for the late Madam Patience Olutayo Obafemi who spent memorable 94 years before she yielded the home call.

Starting from the walk from the morgue down to the cemetery where she was finally laid to rest, Mama’s children ensured that the good life their mother lived continued even in death. Talk about the reception venue, the Aso-Ebi, the cemetery and caliber of people in attendance, it all talked about one thing, affluence.

Did we also mention to you that the paparazzi displayed by the Ebony undertakers was second to none as well? Now you know. City People’s DAMILARE SALAMI 08155134152 and Senior Photojournalist, Abdulrasheed Sanni were there and in this report, they bring you the unforgettable moments for your reading pleasure, enjoy.

Gone are those days when only royalties are buried with a huge display of affluence. Today, many socialites do same for their loved ones and it was the same with Otunba Peter Obafemi and his siblings. Let’s be the first to tell you that Mama Patience Obafemi’s remains arrived the cemetery in grand style. Instead of the regular undertakers’ display where they throw the casket up and down, Mama’s body arrived on a chariot and its rider while the other members of the undertaking team just danced behind the chariot.

It was not just the celebrants and guests that came looking good, the undertakers also had their stunning looks as well. They were all dressed in classy white outfits that represented peace and royalty. The band members were also not left out.

She was seen everywhere around the corpse spraying, dancing and giving thanks to God for a life well spent. Princess Adeola Helen Adeyemi was looking strong and agile. She also sprayed cash countless times to the undertakers before Mama was taken to her final place of rest. However, she finally broke down at the cemetery while she waved her mother a final goodbye.

Let’s also quickly tell you about the fashion style of one of Mama’s children who also doubles as a popular Ogun socialite. He is no other than Otunba Peter Obafemi. He rocked a well-designed Aso-Oke agbada with an expensive looking Gucci suede half-shoes. He undoubtedly became a center of attraction as he stormed the venue. Virtually all the guests in attendance were on a queue to take photographs with him.

Olori Olanike Ayinke Adekeye is the beautiful Queen of Joga Orile, the wife of HRM Oba Adeyemi Adekeye, the Oba of Joga Orile in Ogun State. She revealed how intimate Kabiesi and herself are to Otunba Peter Obafemi who is also a chieftaincy title holder in Joga Orile. She stood by Otunba in every sense of it, she was spotted consoling him at the gravesite when Mama was being finally laid to rest.

Is she gone, she can’t even talk again! Mum wake up! Please say something! These were the agonizing words of Otunba Peter Obafemi as she visited the remains of his beloved at the lyin-in-state. And alas! He burst into tears. Otunba Peter Obafemi couldn’t hold himself any further. He wept bitterly as Mama could not respond to his calls again. He was however consoled by his siblings, wife, friends and close associates.

The funeral was also held inside the Ebony Vaults and Gardens auditorium. Members of the Cherubim and Seraphim movement church, Surulere headquarters were fully present to pay their last respect to their departed senior mother in Israel, Mama Patience Obafemi. They held the funeral service for Mama before her remains were taken to the gravesite where they also conducted the final burial rites. Some of the ministers that officiated include: Apostle Duro Kehinde, Prophet Niyi Obayemi, Special Apostle B.A. Alaka, Special Apostle G.O Obaleye, Special Apostle J.A. Toriola, Senior Special Apostle Dr S.F Korede.

The venue of the reception party was another talking point. It was a waterside venue just beside the Lagos Lagoon. The tranquility and serenity of the venue added some glamour to the event. It wasn’t your regular venue where you find beggars harassing guests. The well-lit venue came alive the more as the night drew nearer. It truly, brought out the beauty of the venue.

It is a known fact that royal fathers in Yoruba land don’t attend burial ceremonies but they do attend the reception of such events where guests are being entertained. Alayeluwa Oba Adeyemi Olanrewaju Adekeye, the Abepa of Jogaland, Joga-Orile, Yewa North, Ogun State and the Aboro of Iboroland in Yewa North area of Ogun State, Oba Daniel Abayomi Salako honoured Otunba Peter Obafemi with their presence.

DJ Shevy is one of the fast-rising disc jockeys making waves on the Island. The blast of his music welcomed guests as they arrived the reception one after the other. His understanding of his diverse audience was second to none. He blended his songs well such that they were able to cater to the needs of all the categories of guests present. The old, young and senior citizens were all well entertained by this vast DJ. One could tell how well the guests enjoyed his performance by their responses to the different songs he played.

Mrs Maureen Obafemi is the beautiful wife of Otunba Peter Obafemi. No one needs to be told this because one could tell from the way she coordinated the reception. She was virtually everywhere and ensured that all the tables were properly served meals and drinks. She also coordinated the sharing of souvenirs such that it went round. Did we also tell you that she looked so gorgeous in her outfits? Yes, she did.

We don’t have to tell you about how good the Faith band is. They are one of the best live bands in the land. Their performance on this occasion was from the heavens. They thrilled all the guests and were the better for it as different socialites left their tables to spray the bands.

Popular blogger and society woman, Abike Jagaban also made the event. She was sighted on the dance floor doing what she knows how to do best with her friend, Olori Olanike Ayinke Adekeye, the wife of Abepa of Joga Land, HRM Oba Adeyemi Olanrewaju Adekeye. Abike Jagaban also took her time to spray the band, Olori Olanike and a few other people that joined her on the dance floor.

Likes they say begets likes; such was the case of Otunba Peter Obafemi on the evening he laid his mum to rest. Most of the socialites at the event joined him on the dance floor to spray him cash. He really had a swell time dancing and getting cash rewards from his friends, colleagues and associates.

One of the most prominent names on the evening was Tennyson Umanah. He is a popular socialite who has been rocking the social scenes for a long time. Faith Band kept singing his praise as he sprayed his friends and the band. Umanah Umanah became a song on everyone’s lips.

READ ALSO: HOW YOU CAN OWN A HOUSE WITH JUST N10,000 – GBOLA OBA, CO-FOUNDER ULDA CO-OPERATIVE

How You Can Own A House With Just N10,000 – GBOLA OBA, Co-Founder ULDA Co-Operative