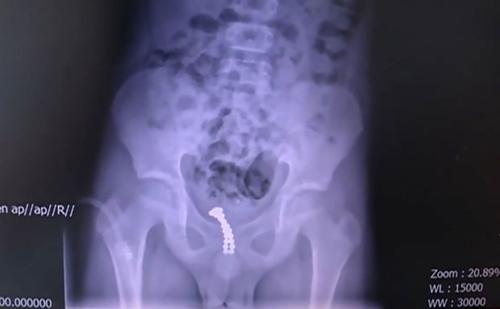 An 11-year-old boy from China, simply identified as Pi Pi, is set to undergo surgery after he inserted 26 magnets into his penis and started urinating blood which alerted people to the problem.
According to a report by Metro UK, the young boy who said he was ‘curious’ when he did the act, was taken to hospital in Wenzhou City where doctors needed to deal with swelling after he put the toys known as ‘Buckballs’ made of a string of magnets into his urethra.
Paediatrician, Wang Yongbiao said X-rays showed the neodymium magnetic spheres lighting up inside the boy’s bladder and urethra. The medic said the Buckyballs caused a blockage that took up about three-fifths of the space in Pi Pi’s urethra tube, which helped explain the swelling and bleeding.
All 26 balls, which had become stuck to each other because of the magnetism, were removed in a surgery this week.
Doctor Wang said: ‘Around 10 of the Buckyballs were inside his bladder; the others were stuck at the front of his urethra.’ The boy has been kept home from school and will need about half a month to recover, the medic added.
Doctor Wang explained that similar cases were common amongst children who are ‘curious’ and ‘still getting to know their bodies.’
Ouch!! Boy Undergoes Surgery After He Inserted 26 Magnets Inside His Penis (Photos) was last modified: August 31st, 2017 by Arinze Ago

What Many Don’t Know About My Husband, Gov. NASIR EL-RUFAI’s 1st Wife, HADIZA