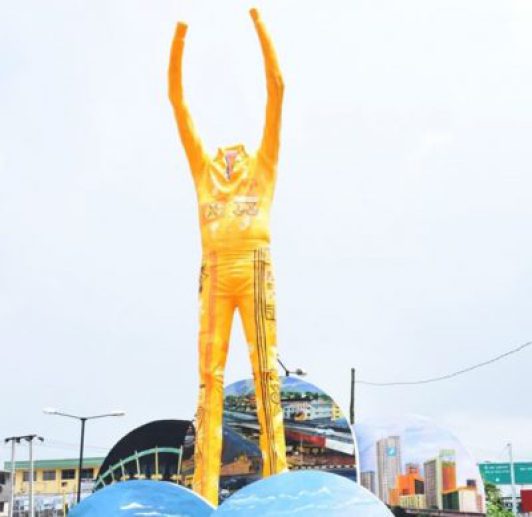 20 yrs after, lives on in the psyche of the people, in their fashions, in their musical aspirations, in their poetry, in their anger, in their hope. Felabration just ended, marking its 19th year celebrating the life, legacy, and significance of Fela.

Fela was an intellectual, who thought very hard about matters of culture. He was part of the Nigerian national participation committee for FESTAC 77. Like his father, who was one of the founders of the National Union of Teachers; and his mother, a great feminist who represented women in the negotiations that led to independence, Fela was also a great public intellectual. He had a strong liking for public debate, with a desire to get people thinking and moving to improve their conditions. His ‘Yabis Night’ at the shrine illustrated his strong liking for debate and exposition of the intellectual basis of his beliefs.

The idea for Felabration was conceived in 1998 by his eldest child, Yeni Anikulapo-Kuti. The idea was to create a week of festivities in which people could celebrate Fela, his ideas, his beliefs, and debate pressing issues that Fela often harped on in his music. Felabration holds once a year during the week of Felas birthday. Fela would often joke that if anything required serious exposition, that it was a topic for symposium debate. This year, Felabration started off with a Senior Secondary Schools Debate on Wednesday, October 4. The topic – “African History: A Curriculum Necessity or Not?” saw 10 Senior Secondary Schools (5 of which were owned by Lagos State) deliberate on the topic.

The theme for Felabration this year was “The Prophecy.” This, according to his daughter, Yeni is addresses the coming to pass of what the late Afro-Beat Legend sang in his songs.This theme resonates particularly well in the current situation of Nigeria; with an increasing awareness of corruption, its effects on the Nigerian citizens, on National growth, and on the future of Nigeria, is timely and necessary. The past themes of Felabration spoke to the socio-political awareness of members of the Felabration Committee. Each year of Felabration has seen relevant themes. Felabration has shown itself to be more than just a festival of music and art; it has proven to be a powerful voice in uplifting Africa, encouraging black pride and proclaiming that black lives matter.

Felabration has become a premier festival for artists and musicians worldwide, looking forward to paying homage, as well as carrying on Fela’s legacy. If you have never made it to any Felabration, it’s imperative you consider attending henceforth.

The concert kicked off with a secondary school debate 5 days before the symposium, after which came the carnival and a 7-day musical concert. The 2 week celebration took place at different venues in Lagos and Ogun State such as the New Africa Shrine, Freedom Park, Kalakuta Museum and some other venues from October 4th to 15th, 2017.

City People’s Showbiz Reporter, DANIJI EMMANUEL was present all through the course of the event as he reports happenings and details. Below are excerpts:

The newly erected Fela Anipolapo-Kuti statue – titled the Liberation, at Allen Roundabout, Ikeja was unveiled by the Lagos State government on Sunday, October 15, 2017. Speaking while unveiling the Liberation Statue in honour of Fela as part of activities to mark his 79th post humorous birthday and 20th anniversary of his demise, Governor Ambode said aside from challenging people to free their minds of all inhibitions and actualize their true potentials, the late music icon also voluntarily turned his back on a life of comfort and privilege, and took to fight for the liberation of the people from neo-colonialism and bad governance. The event had in attendance notable members of late Fela’s family, Yeni, Femi, Seun. Motunrayo and so.

The annual Felabration event usually held in Lagos, with a mission to keep the music life and legacy of the late FelaAnikulapo -Kuti alive and celebrated globally held a symposium on Monday, October 19 with a symposium tagged “40 years past Festac 77, 20 years past Fela, Wither the PAN African Dream?” at NECA hall, Hakeem Balogun Ikeja.

The Keynote Speaker was Professor Patrick Loch Otieno Lumumba and the Panelist were Kadaria Ahmed and Yari Folarin.

THE OTHER FELABRATION EVENTS HELD IN HIS HONOUR

While the planned schedule for felabration by the Organising committee of the annual Felabration was ongoing, other events held around the country and the world. There was a Tourist Package in both Lagos and Abeokuta between Monday 9th to Sunday 15th. Also was there a Carnival on the 14th of October at the Kalakuta Museum in Ikeja. Friday 13th of October saw a Musical Concert at the Federal Palace Hotel while the Felabration week also had  Art Exhibition and Musical Concerts at both Freedom Park and Radison Blu.

This year’s felabration had a surprise stage appearance by Nobel Laureate, Professor Wole Soyinka where he lauded the late Afro-Beat legend for fighting with his life to give Nigerians a better life.

Rave of the moment, Wizkid’s arrival at the Afrika Shrine on the final day of the concert was epic. Upon arrival in the company of his crew which included his security detail, personal bouncer and manager, Sunday Are, there was a stampede both inside and outside the shrine as everyone struggled to catch a glimpse of the Ojuelegba crooner, who has been described as a musical demi-god.

When it time for Wizkid to take over the stage, it was opened with exaggerated hype, fireworks and good instrumentals. Man of the night, Wizkid, majestically sauntered in while the crowd roared in jubilation. Due to suspicions of frail health there were spurious speculations that he might just perform for a few minutes, but unexpectedly, the Star Boy Henchman performed for more than 30 minutes to the surprise of everyone.

WHY SUNDAY OCTOBER 15 WAS VERY IMPORTANT

On this day October 15, 1938 one of the greatest musicians of all time was born in Nigeria. Fela, as a man, stood for justice for the people of Nigeria and Africa. He enlightened the masses of the corrupt practice of the political elites and their leaders. He wanted the government to provide better governance and equal opportunities for the people, to provide basic social amenities for every citizen.

He made it a personal vendetta to fight against the corrupt leaders, political elites, business men etc, with the power of his music, even though it meant being victimised, beaten and thrown into prison for trying to expose the various establishments and individuals.

Using the medium of his Afro Beat music, Fela could reach millions of people, who could relate to the pain and suffering, having been blessed with so many natural resources, yet Nigeria and Black Africa seem to be in the wilderness, with only a minority enjoying the bounty from the land.

This is the 9th edition of Felabration, and it is always packed with a long list of artistes thrilling their fans live on stage in remembrance of the music icon.

The first night performance and appearances at the opening ceremony included: Femi Kuti’s band {Positive Force], Sugar boy, Mayorkun, Ekun, MrEazi, Edaoto, Pepenazi, Femi and the Africanaas band, Omobaba the commedian as MC and a host of others.

The second night of the Felabration music festival had a lineup of artistes who thrilled the guests all through the night till dawn. Artistes like Dlyte, Bilang, Rhyme Cee, Jire, AQM Gang, AK 41, Oba Dice, Famous, Tbams, Bodun and the black beats, Dotman, Jakuzzi, Oluwaseun, Swazzi, Taylor and The Fountain of Jazz Band, Jaywon, Illbliss, Orezi, RicHassani, Ajebutter 22, Skiibii, Kcee, Asha Gangalee Band, Ile Olorun and Muri Thunder all turned up the night with their performances.

In continuation of the concert, the mid-week night had artistes like MOB all the way from Togo lead the night. Other artistes who performed are Kamelion, Lil Dizzie, Double Pee, OC and many more. It was another night of fun and excitement.

The Ashiru Family To Do The Final...