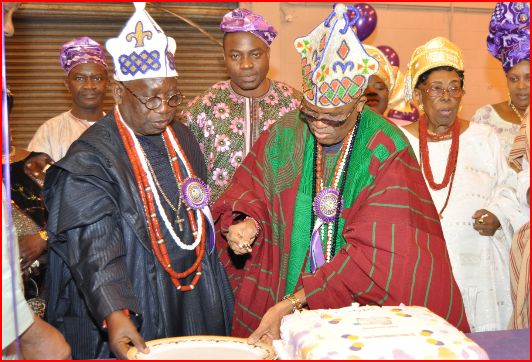 +Traditional Rulers Who Have OWU Blood In Them

Owu Kingdom has produced very many eminent Nigerians who have made a name for themselves in both public and private life. Though the list is long, City People has picked out about a few of such Owu sons and daughters who stand out from the pack.

There is Oba (Dr.) Adegboyega Olusanya Dosunmu, (CON), the Olowu Kangunere, Akobi Odua, Amororo II. He is the Olowu and paramount ruler of the ancient Owu Kingdom. He is the leader of the Owu people. General Olusegun Aremu Obasanjo (GCFR), is another Owu indigene. He has been a two-time President and Head of State of The Federal Republic of Nigeria. He is the Balogun of Owu Kingdom.

Senator Ibikunle Amosu (CON) FCA, the current Governor of Ogun State is also an Owu man. So also Prince Bolasodun Adesunmbo Ajibola (KBE), a former Attorney General and the Minister of Justice of Nigeria and a Judge of the International Court of Justice. He’s Oloori Omo’Oba of Owu Kingdom.

There is also Chief Olufemi Sodeinde, the Oloori Igbimo Owu Kingdom. A politician and philanthropist of repute. There is Chief M.A. Ola Yusuf, FCA, former Managing Director of John Holt. He is the Oloori Parakoyi of Owu Kingdom.

There is also Aare Bolu Akin Olugbade the Aare Ona Kakanfo of Owu Kingdom. He is a successful businessman. His brother too is very successful. Omo’ba Olusunmade Akin-Olugbade, is a lawyer and he runs O.B.A. International Ltd.

There is also HRM Oba Olufemi Ogunleye, the Towulade of Akinale, Arole Olowu of Owu Kingdom, retired as a top Public Relations Executive at Nigerian Airways. There is also Chief Alani Opaleye, a seasoned insurance practitioner. He is the Parakoyi of Erunmu and Alakoso of Apo Owu. Chairman of Allan Q, Group of Companies including XL Insurance Brokers and Allaq Guest Home, Lagos. He is also the Royal Ambassador and Plenipotentiary to the Olowu of Owu Kingdom.

Princess Moninuade Quadri, a school proprietress, Erelu Gbogbade of Owu Kingdom. Chief Seyi Aderiokun, a Federal Commissioner based in Abuja. She is the sister to the late Chief Executive and Managing of GTB, Tayo Aderinokun. Chief Kayode Aderinokun, the Lokosi of Owu Kingdom. An industrialist and a reputable banker.

Not many people know that the Owu people are ubiquitous in many Nigerian cities and towns. Apart from the Owus in Abeokuta, you can find them in Ijebu, Iwo, Ibadan, Ogbomosho, Abeokuta, Ilorin and in many more towns and other states. There are also pockets of Owu settlers in other countries in the West Coast of Africa. They meet every December under the auspices of The Royal Union of Owu People (RUOP).

Unknown to many, they are about 14 royal fathers and 14 other Owu Traditional heads. And they have all been meeting every year since December 1992. The first meeting was organised by Balogun of  Owu, Chief Olusegun Obasanjo.

The following year, the Orile Owu community played host, followed by the Owu Ijebu zone and then the Owu Ikosi Lagos zone. After that of December 1996, Owu Kwara zone took its turn, then Owu Ibadan played host. That meeting was followed by that of Iwo and then Ogbomosho. That was how it came till last year December when the Owu Kuta zone in Osun played  host.

The first Olowu of Owu was a grandson of Oduduwa. Being a son of a Princess, daughter of Oduduwa. Olowu derived his royalty from his maternal descent from Oduduwa and, therefore, acquired the right to wear a crown as his uncles in an unusual circumstances.

The story as recorded by Samuel Johnson is that, when Olowu was a child, he often played on his grandfather’s lap, while the old man wore his crown. In one of such childish pranks, the child pulled at the crown and his indulgent grandfather placed it on his head much to the delight of the child. When attempts were made to take the crown back, the child was said to have cried so much that the grandfather directed that the boy be allowed to keep it. Thus, the first Olowu came to be called ASUNKUNGBADE (One who cried to secure a crown). This story is accepted by generations of surviving Owu Communities to date that the first Olowu was Asunkungbade, hence the name becoming one of the appellations (Oriki) of all Owus.

It is interesting to note that wherever Olowu’s children went to establish settlements, they usually went with a Beaded Crown and are generally referred to as Olowus with the appellations (Omo) sons to Ajibosin to indicate that they all have common Ancestor “Oba Ajibosin”, founder and first Olowu of Owu Dynasty.

Why OWU People Are Powerful & Influential was last modified: January 8th, 2017 by Reporter

Pastor Olukoya Is Not Happy With Women Who Give HEAD [SEE]

How ADRON Became The No 1 Brand In Real Estate MD/CEO, ADETOLA EMMANUEL-King Reveals His Strategies

Contact Our Father Dr AYEMOJUBA Of Ijebu land Today. If You Need Any Spiritual Help On Any of The Following – Promotion At Work, Commanding Tone,