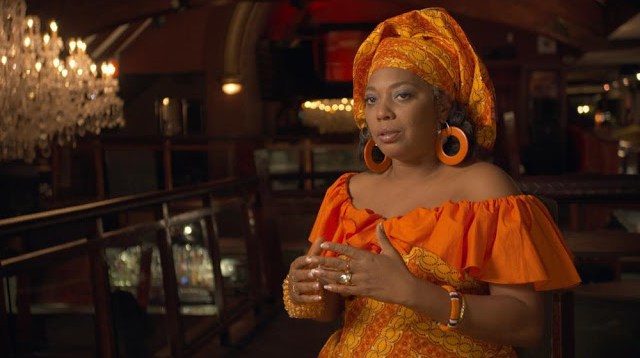 Yeni Kuti is the first daughter of the music legend Fela Anikulapo Kuti. She is a Manager, a fashionista, a TV Presenter and most importantly a dancer.

She displays energy, passion whenever she dances. She has been a dancer for over 3 decades, but she still exhales the same energy she used to years ago. In this interview with City People Publisher SEYE KEHINDE and ADEOLA FAGBIYE. She spoke about her style, her love for  dancing, how she started dancing and how she manages her multiple roles last 2 weeks Monday. Enjoy!

How do you juggle your different roles as a manager, a dancer, a fashion stylist, and a TV presenter?

I guess I’m used to juggling them now. Errm…. Because I’m doing so many things now that I’m older maybe I wish I had done much more when I was younger, so it would be easy to juggle them. So, now I kind of get a bit stressed out, but they keep  me busy and they keep my life full, so, I can’t complain.

How, do you do all together?

Lets, put it this way a Thursday, which is a rehearsal day. I’ll get ready for the TV show on Wednesday, I’ll get what I want to wear on TV ready, I ensure that my colours are matching. Then, I get what I can wear for the rehearsal, which has to be loose fitting, sneakers, so you can dance. So, I guess I have  mastered the art. That is what I can say

Do you still dance?

Yes. But not on stage.  I still dance with the dancers, I do the Choreography with them, I used to run a dance class, but it just went a bit too much for me because it used to be on Saturday and I didn’t even have  time for myself. I just said let that one take a back seat for a little while.

How long have you been dancing?

How did dancing start with you?

I had been crazy about dancing, the books my father used to buy for me were all on dancing and when I was in secondary school, I did join almost every single dance troupes that was in school but then, when reality hits, you realise the need to make money. So, I went to do journalism. I kind of took a back seat and took up a job as a secretary in an architectural firm and was there for a few years but the dance “thing” was still in me, but there was no opportunity. Besides you are now facing reality, you have to work, you have to survive and then one day, Femi said: “Oh! I’m starting a band.” And I was like “ehn! ehn! You are starting a band. So, my sister and I said we were going to do the Choreography, just leave it to us, and that’s how we started. It’s also the reason why Positive Force always had choreographed singers because my sister and I took it up.

I remember before our first show on December 13th 1986, we rehearsed for like 2 to 3 months, getting Choreography done, we did everything from the consumes to the shoes that we wore, everything, aah! And the rest as you’ll say, is history.

How come you didn’t take up journalism as career and why didn’t you practice it?

Errm… As I said, some things happened that I just don’t want to go into, so I had to survive. Errm… and, of course, when Positive Force started, all that one did was to take a back seat.

I went straight into dancing, which was my real passion.

How did you start your style of dressing?

I have a friend, his name is Collins. When he used to see me at rehearsals, he’ll say YK, this yours shoes, this your wares, you should do a magazine because nobody is seeing the way you dress and I’ll just say abeg Apaks leave me joor! But he was always talking about my style.

And then when this TV show came up, it was just the way I dress, which was normal for me, but now many  people started to like my style, but its always been me. I’ve always dressed according to the cash I’ve  in my pocket sha laughs…

There are sometimes that cash no go gree  you. But I even remember  when I was working for Majiro Partnership, like, if I had the opportunity to travel and buy clothes the way I used to put them together, you know, people used to pay compliments to me then, and I was just in my 20s. So, I’ve always been  into fashion.

When you were much younger, what was it that you wanted to do?

Dance! From when I was a kid, from when I can remember, I’ve always wanted to dance.

Was there anyone that shaped your love for dancing?

IPI Tombi. But it was my father’s first dancer, Dele. She was a beautiful dancer. I used to just sit with her. She would  teach (my sister and I) how to dance. How to shake and we were just “little rats” then.